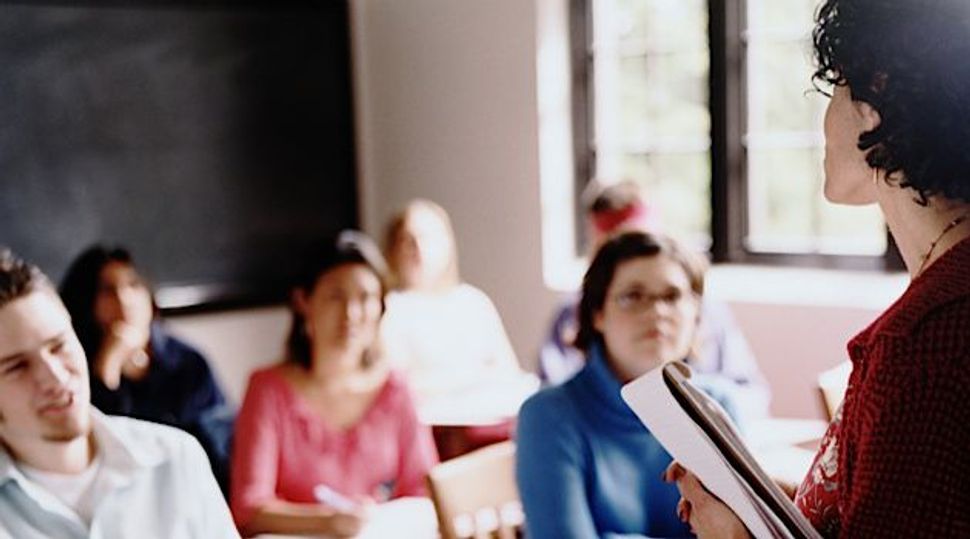 Opponents of an Israel boycott proposal being voted on by the Association for American Studies were glum about their chances of defeating the resolution, meant to register the group’s protest against Israel’s policies towards the Palestinians.

The on-line vote, now taking place, is open to all members of the 5,000-member group and closes Sunday.

If the resolution backing an academic boycott against Israel is approved, as many expect, the outcome would be claimed as an important victory by advocates of the movement to boycott, divest from and sanction Israeli institutions, often known by the shorthand BDS.

The question will then be whether the vote represents an outlier amid broader rejection of the movement by larger academic associations in America — or the beginning of a trend.

“We are confident that this resolution will be remembered as among the first of many future similar decisions by U.S. academic entities to come,” stated a letter to the ASA signed by nearly 5,000 pro-boycott activists.

The Israel academic boycott movement has gained traction in Europe but has yet to register much success in the United States. In April the Association for American Asian Studies — like the ASA, one of the smaller such academic groups — approved a similar resolution in protest of Israeli policies, though few media outlets took note at the time.

Pro-Israel activists, anticipating the ASA vote, sought to put the decision in the broader context of the battle against BDS. While acknowledging that it would be celebrated as a major victory for detractors of Israel, they argued that the wall of resistance to the academic boycott has not been breached.

“Passage will have limited symbolic significance,” said Geri Palast, managing director of the Israel Action Network, a joint project of the Jewish Federations of North America and the Jewish Council for Public Affairs that coordinates communal anti-BDS activity. “However, it does not reflect the public view or the position taken by large academic organizations.”

The resolution being voted on dials back significantly on the language in the original proposal brought to the ASA by boycott advocates. The resolution calls only for refusing to “enter formal collaboration with Israeli academic institutions or with scholars who are expressly serving as representatives or ambassadors of those institutions, or on behalf of the Israeli government.” The boycott resolution explicitly exempts “individual Israeli scholars engaged in ordinary forms of academic exchange.”

The association’s National Council, a 20-member body that decides on most ASA policies, endorsed the resolution on December 4 after softening the original language. But in an acknowledgement of the sensitivity of this issue, the council decided in this case to put the matter to a vote of the entire membership.

The resolution, which focuses on treatment of Palestinian scholars in the Israeli-occupied West Bank, states that boycotting Israel “represents a principle of solidarity with scholars and students deprived of their academic freedom and an aspiration to enlarge that freedom for all, including Palestinians.”

Matthew Jacobson a past ASA president and current member of the group’s National Council, judged the decision “very tempered and much more symbolic” than the original resolution. Jacobson, a professor of American studies and history at Yale University, said the language adopted will have little practical impact on academic ties with Israel, but was morally important to adopt.

“There is a real sympathy with the notion that this is something the organization should speak out on,” he said. He added that America’s enabling of the Israeli occupation makes the issue especially relevant for scholars dealing with American history and society.

The world of scholarly organizations, especially those representing academics in social studies and the humanities, is known as a bastion of progressive thinking, according to a number of ASA members. They note that such groups tend to be critical of Israel’s policies and practices towards the Palestinians. ASA members include not just historians but also scholars in literature, culture, sociology and anthropology.

The association has faced calls to take a stand on the Israel’s occupation policies for years, but only recently became more open to the idea of the boycott. Jacobson and others involved in the battle over the vote attributed the change both to the make up of the group’s leadership and to the increasing focus of its members on indigenous studies and on colonialism. The shift grew more pronounced after 9/11 and America’s reaction to it at home and abroad, they said.

The vote in April by the Association for American Asian Studies was actually the first pro-boycott vote by an American academic association. But it went largely unnoticed at the time. Pro-Israel activists said they did not wish to draw attention to the Asian Studies group’s decision by issuing vocal condemnations.

At the ASA, in contrast, supporters of Israel within the group and from outside organizations have waged a high-profile campaign against the boycott resolution.

Still, they were slow to react. At an ASA debate in November on the resolution, supporters of the boycott clearly outnumbered those who opposed the move. Activists did not show up in significant numbers then to speak out against the measure.

It was just one week before the November debate that several boycott opponents formed a group called “ASA Members for Academic Freedom.” The group began circulating letters and collecting signatures of ASA members urging rejection of the resolution. The group also got eight former ASA presidents to sign a letter opposing the decision.

“An academic boycott will only serve to stifle intellectual debate rather than bringing together precisely those people who most need to engage with one another,” said Sharon Musher, an associate professor of history at Richard Stockton College in New Jersey, who was among the organizers of the anti-boycott drive at ASA. She added that “by targeting the national homeland of the Jewish people while ignoring other countries that severely violate freedoms – academic and otherwise – the resolution sets an unfair double standard.”

The organized Jewish community provided its support from the outside but was careful not to turn the debate into a battle of the Jewish establishment against an academic group. “This was one of the cases where you don’t want a full page ad in the New York Times,” said one activist.

“Ultimately, these battles should be won by the people inside these organizations,” added Kenneth Stern, director of anti-Semitism and extremism at the American Jewish Committee. “We can provide intellectual context, but outside groups cannot dictate the agenda.”

In the few days remaining before the vote closes, activists are still trying to convince ASA members to take a stand against the boycott. Members opposing the resolution complain that ASA has not allowed them an equal presence on its website to post their views. But most agree it will be difficult to defeat the resolution in any event. A decision on Sunday to boycott Israel will not be a great surprise.

The challenge for pro-Israel organizations, if that happens, will be to make sure the ASA decision does not open the door to other academic groups.

“I don’t see that this will create a domino effect,” said Stern, “it will not transform the academic world to pro-boycott.”

This confidence is based on the Jewish community’s success in blocking anti-Israel moves in the larger academic associations in the five years since British university unions gave the academic boycott a boost with their adoption of strong anti-Israel measures.

The most significant partner pro-Israel groups have in their battle against academic boycott has been the Association of American University Professors (AAUP) with its 48,000 members. AAUP has taken a strong stance against boycott moves and has voiced its opposition to the ASA move in a letter it sent the organization. In October, pro-Israel activists registered another victory when the 30,000 member American Public Health Association defeated a boycott resolution.

Still, the larger battle is far from finished. Next to take up the issue will be the Modern Language Association, which convenes in January for its annual meeting. The organization will discuss a resolution condemning Israel and could possibly ask its 30,000 members to take on a boycott resolution as well.