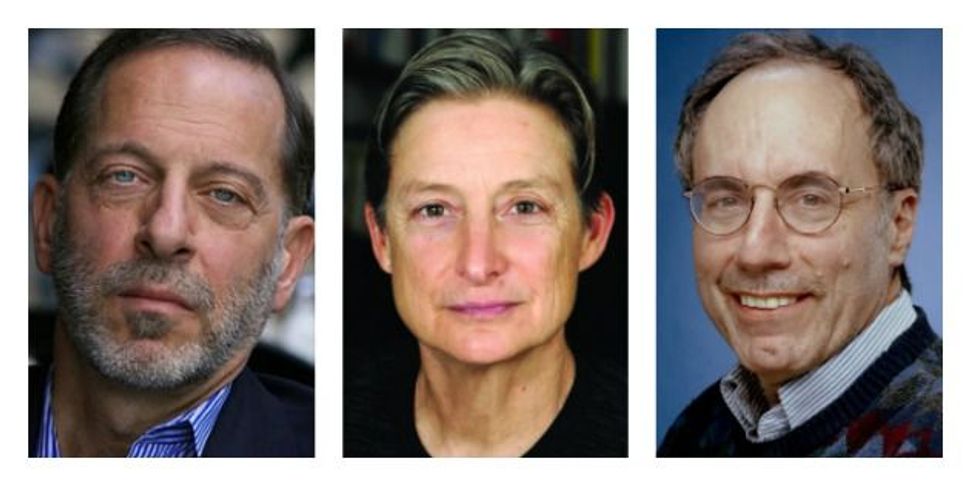 A senior editor of The New Republic is invited, disinvited and — after protests — re-invited to discuss his widely reviewed new book on U.S. policy toward Israel at New York’s Museum of Jewish Heritage.

A renowned literature and philosophy professor is forced to withdraw from giving a presentation on Franz Kafka, one of her areas of specialty, by New York’s Jewish Museum after complaints flood in protesting her anti-Zionism.

A debate is raging in the Jewish world about what constitutes acceptable discourse on Israel. And these events, occurring within days of each other in mid-February, seemed to underline the urgency of an issue coming to a head as never before: What speakers are appropriate at Jewish institutions that purport to be devoted to serious intellectual inquiry?

“I think there have been lots of incidents because the level of virulence in the debate about Israel has increased,” said Leon Wieseltier, The New Republic’s longtime literary editor. “It’s caused [Jewish institutions] to hunker down. It’s caused them to get reflexive and defensive.”

Meanwhile, debate intensifies over guidelines that Hillel International, American Jewry’s campus outreach arm, requires of its campus affiliates concerning what kind of individuals and groups they may sponsor or partner with on Israel-related events.

Steven M. Cohen, a prominent sociologist and demographer who specializes in contemporary American Jewish life, warns that the disputes will only get worse as demographic change brings in a new generation.

“[There is] a general shift among young people away from support for the policies of the Israeli government, albeit with support for Israel,” said Cohen, a professor of Jewish Social Policy at Hebrew Union College-Jewish Institute of Religion and director of New York University’s Berman Jewish Policy Archive.

Cohen cited the recently published Pew Research Center study of American Jews, where, he said, the shift among younger Jews is clear. “The conventional communal leadership in the U.S. has only two compartments,” he said. “One is pro-Israel and the other is anti-Israel. So it’s hard for them to understand that there’s a third compartment: pro-Israel, critical of its policies.”

One sign of the shift can be seen at Vassar College’s Jewish Union, which on February 18 joined Swarthmore College’s Hillel in publicly rejecting Hillel International’s guidelines. Those guidelines bar collaboration with speakers or groups that “delegitimize, demonize or apply a double standard to Israel,” or deny its right to exist.

Now, even some public intellectuals who have taken the lead in opposing the movement to boycott, divest from and sanction Israel — or BDS, as it is known — are protesting efforts to banish BDS supporters and other strong critics of Israel from Jewish venues altogether.

Wesleyan University President Michael Roth publicly condemned the American Studies Association, an academic grouping of scholars in the American studies field, when it voted to support a boycott of Israeli universities last December. The ASA’s boycott resolution, which was passed to protest Israel’s policies towards and alleged restrictions on Palestinian scholars, targeted only official representatives of Israeli schools but specifically exempted individual Israeli scholars.

In a December 19 [opinion piece][1] published in the Los Angeles Times, Roth termed the move a “repugnant attack on academic freedom.”

Then, on February 24, Roth found himself in the position of criticizing the Jewish Museum for scrapping a talk on Kafka by a prominent Israel boycott supporter and anti-Zionist, Judith Butler.

“What a sad commentary on the Jewish community’s tolerance for debate these days!” Roth wrote under the name of psychotherapist Sigmund Freud, whom he portrayed as part of the same speakers series in which Butler was slated to appear as Kafka.

“Freud,” as Roth fashioned himself in an article in the Huffington Post, likened the motivations behind the ASA boycott to those behind the Butler event cancellation: “[C]ultural boycotts are so debilitating – whether it’s the refusal to hear from Israeli professors or the refusal to hear from an anti-Zionist philosopher,” he wrote. “You can lose your ability to learn from difference and conflict – the wellsprings of real cultural development.”

The Jewish Museum’s decision to scrap Butler’s speaking engagement is unique insofar as Butler was invited to speak on a topic completely unrelated to Israel. Butler pulled out of the event under pressure from Israel supporters. Claudia Gould, the museum’s director, said Butler’s “political views were not a factor in her participation in the Franz Kafka program. However, the debates about her politics became distracting and disruptive, making it impossible to present the conversation about Kafka as intended.”

Wieseltier was appalled by the decision. “I despise Judith Butler, but her misguided views [on Israel] should not disqualify her from speaking on Kafka,” he said.

In Wieseltier’s view, this is not a matter of censorship; Jewish institutions, like other private institutions, have every right to define the parameters for speakers and events under their own roofs, he said. “But it’s not just a matter of rights,” Wieseltier explained. “It’s a matter of wisdom. It’s always a sign of intellectual weakness or fear to insulate oneself from arguments that are relevant to one’s views. People should know how to respond to views that they think are erroneous.”

When Alixandra Kriegsman arrived at the University of Pennsylvania, that was precisely one of the skills she lacked. After many years of attending Jewish day schools and participating in class discussions about Israel, she had never even heard people refer to Israel’s rule over the West Bank as an “occupation,” she said.

“I felt extremely undereducated and misinformed when I started taking classes on the subject [of Israel] in college,” said Kriegsman, who is making a documentary about the lack of nuance in Jewish schools’ Israel curricula. She said many students tell her their day school education left them ill-prepared for discussions of Israel in college. “Going to college basically taught them that they really weren’t educated. They were taught to advocate.”

Paul Shaviv, the Head of School at Ramaz, does not see his school as engaging in such avoidance. Nevertheless, he is not moved, so far, by the protest petition from some of his students and their parents to allow Columbia Professor Rashid Khalidi, the prominent scholar of Palestinian history, to speak at his school.

The students’ invitation to Khalidi began seemingly straightforwardly. “We decided to invite Professor Khalidi in order to promote open dialogue at Ramaz and to give the student body the opportunity to hear an outside perspective,” said the school’s Politics Society in an email to the Forward. Khalidi, a Columbia University professor of Modern Arab Studies, would have discussed the prospects for a two-state solution to Israel’s conflict with the Palestinians — a solution Khalidi supports, though he believes Israel’s policies make it impossible.

As was first reported in Mondoweiss, an anti-Zionist blog, Shaviv canceled the invitation. The students’ petition asking Shaviv to change his mind has garnered over 250 signatures since it was posted online last week.

Shaviv said his decision was influenced by fear that Khalidi would be an unfair dialogue partner and by concern about the controversy that would accompany his visit.

“Rashid Khalidi is an academic and politician of immense knowledge and expertise who is not a dialogue partner for Jewish high school kids,” he said. “It would be like saying to the captain of our high school tennis team, ‘You’re going to play a match against Andre Agassi.’”

Shaviv emphasized that Ramaz approaches speech differently because it is a high school and not a JCC or a university. “There are common sense parameters here,” he said.

Wieseltier snorted at this. “It may come as news to the administration, but when their kids go to college they’re going to run into views like Khalidi’s,” he said. “The bubble strategy never works. As soon as the kid leaves the bubble, you’ve got a problem.”

Meanwhile, at around the same time, the Museum of Jewish Heritage invited John Judis, The New Republic senior editor, to speak about his new book on President Harry Truman’s Middle East policies. In the book, Judis portrayed Truman as deeply wary of Zionism and argued that Truman only supported the new state under pressure from a Jewish lobby. The book has garnered praise from some prominent historians — but also, some savage reviews from writers who see it as unsympathetic, at best, towards Jews struggling to find a means of survival and reconstitution in the wake of the Holocaust.

On February 18 — the same day as the Vassar Jewish Union’s action — the museum decided Judis’ book was too controversial and disinvited him. But on February 23, the Museum’s director, David Marwell, announced Judis would be coming after all. Marwell said he was unimpressed by Judis’s scholarship and saw the book’s slant as biased. He had earlier told his staff not to invite Judis, but “I later learned that my staff then rescinded an invitation to Mr. Judis, which they had, unfortunately, already extended without my knowledge,” he wrote in a blog post.

“Rescinding an invitation…naturally raises the ugly specter of succumbing to pressure and giving in to outside influence,” he wrote. “I am particularly concerned that the Museum should be accused of censorship or of being allergic to controversy.”

Marwell plans now to moderate the discussion with Judis himself when he appears at the museum this spring.

Cohen believes that Jewish institutions are now simply being forced to clarify boundaries that existed all along. “They’re drawing the same boundaries that they’ve always had and now they’re forced to articulate them,” he said.

“I think it’s good for Zionism to have the full range of Jewish opinion and those of our adversaries represented,” Cohen said.

Cohen stressed that he favors bringing not just critics of Israel on the left to speak at mainstream Jewish intellectual venues, but also figures from the far-right such as the so-called Hilltop Youth settlers who stake out unauthorized outposts in the Israel-occupied West Bank in defiance of the government.

But there are dangers in hosting anti-Zionist speakers, according to Jonathan Tobin, online editor of Commentary. “Ultimately if it ever became uncontroversial for Jewish institutions to sponsor anti-Zionist speakers or events, that would say something very significant about where the Jewish community is,” he said. “We don’t debate whether racism is good or bad. We don’t host [white supremacist] David Duke. I think much of the community believes that anti-Zionism ought to fall in the same category.”