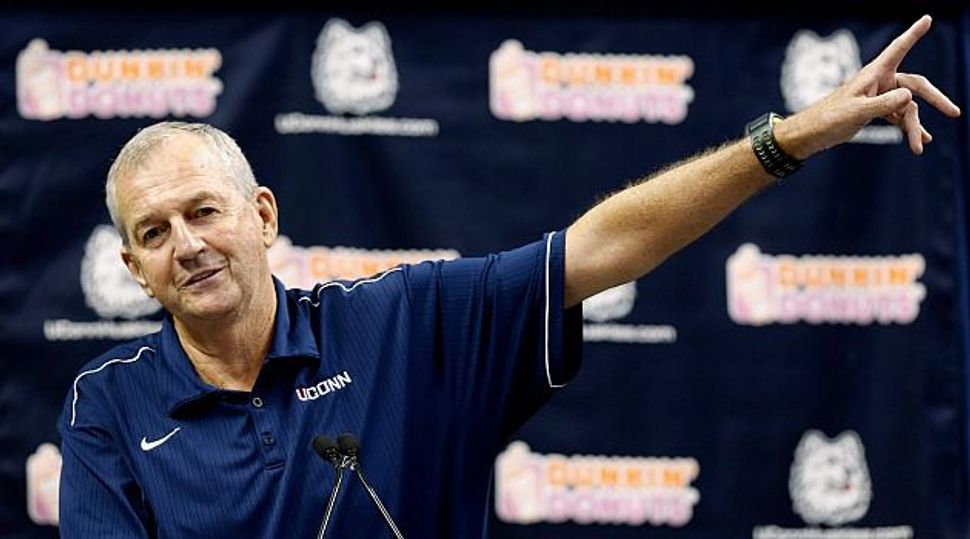 After struggling for many years to build a successful basketball program, The University of Connecticut basketball program decided to hire Jim Calhoun as its new coach on May 14, 1986. At the time, the university was hoping they made the right choice but little did they know that two and half decades later, Calhoun would become one of the most decorated coaches in the history of basketball.

In Israel, many Israeli basketball have grown accustomed to Calhoun’s name as he recruited Israeli basketball stars Nadav Hennefeld and Doron Sheffer to the program. At UConn, both players would became stars and would end up having very successful professional careers.

The Forward’s Raphael Gellar spoke to coach Calhoun about his recent trip to Israel, his relationship with the Israeli basketball players he recruited and who he likes in March Madness.

Raphael Gellar: Why did you decide to come to Israel?

Jim Calhoun: Well, I have been to Israel six times in the past 25 years. Throughout the years, I recruited Nadav, Doron and Gilad to UConn and have been in Israel to conduct basketball clinics. This past April, the Consulate General from NYC came up to see me and we talked about going over to Israel. I thought about going to Israel with two things in mind: promoting basketball and academics.

The people of Israel credit you for recruiting, Nadav Hennefeld, Doron Sheffer and Gilad Katz. Do you still keep in contact with those guys?

I saw Gilad and Nadav at a function we had for some of our alumni in Tel Aviv. I talked to Doron a couple of times on the phone but unfortunately we weren’t able to meet because of our busy schedules. In my past visits, I have met with the Sheffer family, who I have known for many years and they are just great people. It was great to see all my good friends as well. Of course I also enjoyed touring the country, conducting some drills and watching a few professional games.

What are your impressions of professional basketball in Israel?

For years the league has been very good. There are roughly 30 teams in the NBA and around 425 players in the NBA. Another 200 to 300 players could play in the NBA but for some reason … they didn’t make a roster. These players come to European leagues such as the one in Israel and become stars. I really enjoyed going to the professional games here as I thought the crowds were great and the games were really competitive.

Do you have a relationship with Maccabi Tel Aviv Head Coach David Blatt?

When I was a younger coach, I recruited Dave but he ended up going to another school (Princeton). Despite this, we kept our friendship throughout the years. During this past visit, I had some tea with David and spent 2-3 hours talking with him. David has been a friend of mine for years, and I really got to know him when we were recruiting him. I really respect David as he has done a terrific job coaching around the world. I also know Hapoel Jerusalem coach Brad Greenberg and his brother Seth. I know a lot of people over in Israel and I like to keep my eye on them from America.

How much has the globalization of basketball affected you over the years?

Whether you are kid in Jerusalem, Boston, L.A., Argentina or anywhere in the world, basketball is basketball. I remember I was talking to someone from Abu Gosh and they told me the village was mostly a Muslim community. When I stepped into the gymnasium to conduct [in Abu Gosh] the clinic, the guys were just 14 to 15-year-old kids, there was no question it was all about basketball, nothing to do with anything else, we all loved the game and I believe that can bring us all together. There are a very few places in the world where I won’t run into someone who shares a basketball history with me.

This was your sixth trip in Israel, did you go anywhere new?

We went to Tzfat, which we had never been to before. I thought it was incredible. I loved being in the mountains, I felt like I was in Austria. I also went to a beautiful village in the north. Every time I come back to Israel, I am always shocked how much Tel Aviv is growing. Israel is a great place to visit, there is so much history and the country has such a great culture.

Do you watch a lot of college basketball or is too hard for you to watch?

It’s actually the most I have gotten to watch. I watch more basketball now than I have in many many years. I love watching the teams with coaches who I know really well. Since I retired, I have also had a chance to visit a lot of my coaching friends in the NBA and in college.

Who is your favorite to win the NCAA National Championship?

There’s not a great team out there. But, I think Michigan State has a good chance because they are a veteran team, and Tom Izzo is a great coach. I see a lot of parity. I don’t see a dominant team and I think that’s good for college basketball in many ways.