Rwanda Leader Paul Kagame Gets Jewish Embrace — But What About Human Rights? 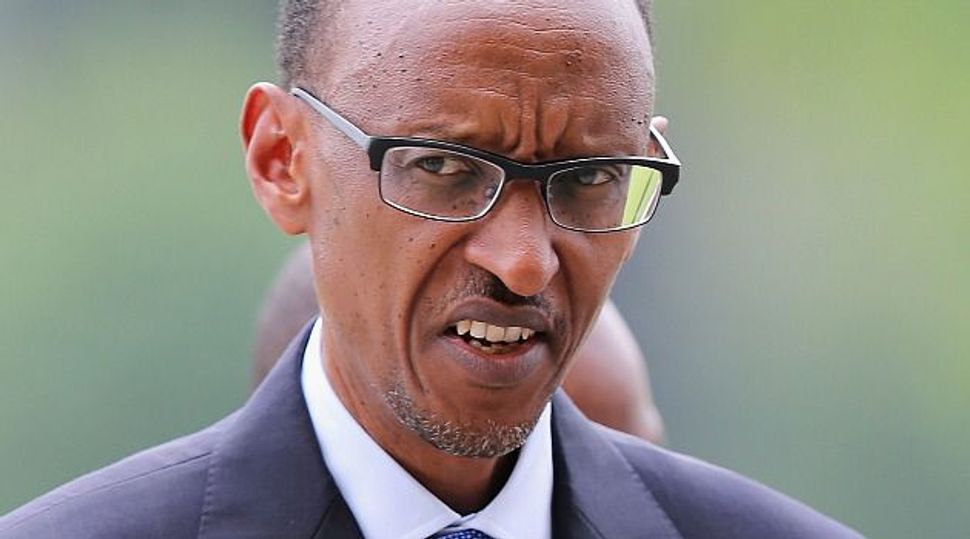 Wrong Partners? Rwanda President Paul Kagame ended the genocide that killed up to 1 million people in 1994. But are Jews and others overlooking rising evidence of his authoritarian rule? Image by getty images

It was one of the worst mass slaughters since the Holocaust. And two decades later, Israel and the American Jewish community, along with much of the West, are embracing the leader who stopped it as a modern-day hero.

A series of memorial events around the world in April will mark the somber 20th anniversary of the 1994 genocide in Rwanda. The anniversary will give Western countries, which were paralyzed with inaction during the slaughter, an opportunity to trumpet the new Rwanda as a contemporary success story.

The embrace is a feeling shared in full by Israel and some American Jewish leaders. Post-genocide Rwanda has become a diplomatic ally and trade partner for the Jewish state, and the African nation’s resurrection from the ashes of genocide has, for Jews, invited unavoidable comparisons to the plight the Jewish people faced just a few generations ago. It has led Jewish leaders to avidly support President Paul Kagame as the type of leader they only wish they had had during their own dark times.

“He is the only living man to stop a genocide,” said Rabbi Shmuley Boteach, the Rwandan president’s key advocate among American Jews. “He is a personal friend of the Jewish people.”

But like most of the international community, these Jewish leaders have chosen to set aside an increasing drum beat of claims by human rights advocates, the United Nations and even some U.S. government officials that Kagame is tied to civilian killings and mass rapes carried out by rebel troops in the neighboring Congo that his government backs. Several allies-turned-dissidents who fled Rwanda have also been murdered abroad. They include Kagame’s former intelligence chief, who was strangled to death in Johannesburg in January. Other dissidents abroad have been attacked, but escaped injury. Kagame has also been accused of having supported war crimes by his troops against civilians in the aftermath of the Rwandan genocide.

Kagame has staunchly denied responsibility for any of these crimes, though after the assassination in South Africa of his former intelligence chief, Patrick Karegeya, he said: “I actually wish Rwanda did it. I really wish it.” South Africa expelled three Rwandan diplomats whom it accused of having links to the murder and to the attempted murder of other Rwandan dissidents living in South Africa.

“This creates a challenge for organizations like ours [that] want to build bridges,” admitted Eliseo Neuman, director of the American Jewish Committee’s Africa Institute, which is active in Rwanda. “But this should not completely tarnish Kagame’s image.”

On March 11, Ed Royce, chairman of the House Committee on Foreign Affairs, wrote a sharply worded letter to Secretary of State John Kerry, urging the administration to “closely re-evaluate” its ties with Rwanda. “Allowing President Kagame’s violent rhetoric and the slaying of dissidents abroad to go unchecked will only embolden the regime,” Royce stated.

The horrors of the 1994 genocide involved the mass slaughter of some 500,000 to 1 million people by members of the country’s majority ethnic group, the Hutu. Their victims were members of the minority Tutsi ethnic group and moderate Hutus. An interethnic struggle for political supremacy had plagued the country for decades. The killings began as if by signal from a starting gun, after an unidentified surface-to-air missile shot down an airplane carrying Rwandan President Juvenal Habyarimana and the president of neighboring Burundi, who were both Hutus.

The slaughter continued for about three months. Just who shot the missile has been the subject of clashing, still unresolved narratives. In one scenario, the culprits were Tutsi rebels led by Kagame; in the other, they were extremist Hutus enraged by the Habyarimana government’s moderate policy toward the Tutsis.

Kagame was, at the time, the leader of the Tutsi rebel group, known as the Rwandan Patriotic Front. He emerged as a heroic figure who not only fought back against the Hutu aggression, but also succeeded in rebuilding the nation after the bloodbath.

Immediately after the genocide, Kagame, who later became president, was the driving force behind the scenes in planning and executing Rwanda’s reconstruction. He is credited with having sought to promote ethnic reconciliation. Among other things, he banned ethnic-identified political activity. A flood of international aid came in from countries that had studiously avoided action when the genocide was taking place. A stream of foreign investments, in turn, followed. Rwanda became an economic miracle and has seen an average growth rate of 7 percent since the genocide. Its capital, Kigali, is now known as the cleanest city in Africa.

“Between the guilt over inaction against the genocide and amazement at Rwanda’s accomplishments, we’ve not looked critically enough at the country,” said Peter Pham, director of the Atlantic Council’s Africa Center.

But questions about Kagame’s conduct have hardly changed international support for his government, nor have they deterred the Jewish community from engaging with it.

Several Jewish organizations have been active in Rwanda, but none has come close to having the public impact of the Agahozo-Shalom Youth Village for genocide orphans. Founded in 2008 by Anne Heyman, a Jewish communal activist who in late January died in a horse-riding accident, the youth village is a widely acknowledged success story in helping to rebuild the lives of Rwandan orphans. The project served as the first significant bridge between the government in Kigali and the American Jewish community. In February, Heyman’s widower, Seth Merrin, met in Rwanda with Kagame.

The American Jewish Joint Distribution Committee, another Jewish group active in the country, provided initial funding for the youth village. And the AJC has taken groups to Rwanda and brought leaders to Israel from Rwanda.

Kagame’s own key contact in the organized Jewish world has been Boteach. The celebrity rabbi said he first got acquainted with the plight of the Rwandan people through a Rwandan nanny who cared for the children of his close friend, the late pop star Michael Jackson. A formal invitation to visit Rwanda came after his daughter, who served in the Israel Defense Forces, hosted the Rwandan chief of staff and told him about her father’s interest.

Boteach said he had forged close ties with Kagame and with his foreign minister, Louise Mushikiwabo, who sat next to Boteach when announcing, on October 22, her government’s decision to open an embassy in Israel.

Boteach is full of praise for the African leader, whom he describes as a “hero.” Boteach told the Forward that he had discussed the accusations of war crimes and human rights violations with Kagame and his top advisers. The rabbi does not believe they are true. He compared Kagame’s situation to that of Israel, which has come under fire for taking actions it viewed as necessary for its self-defense.

“You need to look at the criticism on Rwanda through the same lens you look at criticism against Israel,” he said.

Neuman took a more nuanced approach. The AJC official urged critics to keep the broader context of events in Rwanda in mind when leveling accusations at Kagame. But he also said that the Rwanda government must bear in mind the need to “nurture the sympathy of the world.” Sympathy for the genocide-stricken nation “will not last forever” if the government does not heed this, he said.

During a visit to New York last September, Kagame won a stamp of approval from prominent members of the Jewish community during a panel discussion in which he shared the stage with author and Holocaust survivor Elie Wiesel, Boteach and Republican mega-donor Sheldon Adelson. The issue of Kagame’s human rights record was not raised onstage. When a heckler in the otherwise supportive audience tried to ask questions about this, security people forcefully removed him from the hall. Following the event, Boteach, Adelson and philanthropist Michael Steinhardt treated Kagame to a kosher dinner at a New York restaurant.

For Israel, having Rwanda as an ally holds special diplomatic importance. As a rotating member of the United Nations Security Council until the end of this year, Rwanda is among 15 nations that get to vote on key issues, including sanctions on Iran and U.N. involvement in Syria.

Israeli defense contractors have also been working with the government in Kigali for many years. More recently, there is a growing field for Israeli business investments. Energyia Global, an Israeli clean energy company, has started work on a $23 million solar energy project that will supply 8 percent of Rwanda’s electricity. The company’s co-founder and CEO, Yosef Abramowitz, said that it was the “zero corruption and 100 percent professionalism driven by the government” that made the investment in Rwanda possible.

Between the praise showered on Kagame by Israelis and American Jews and the accusations of war crimes hurled at him by critics, experts see a more complex picture of the Rwandan leader: someone who has redeemed a nation from the brink of destruction, but who has also deployed increasing authoritarianism at home and the use of violence abroad to maintain his position.

“For many years we’ve been willing to cut him some slack because we’ve seen from how far they’ve come,” Pham said, “but friends of Rwanda should honestly raise their concerns.”

Rwanda Leader Paul Kagame Gets Jewish Embrace — But What About Human Rights?