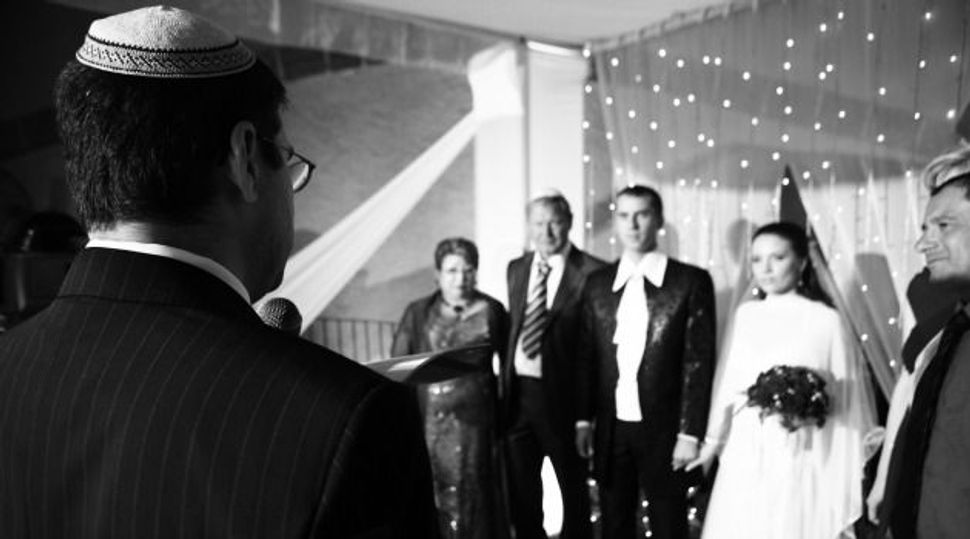 They live as part of Jewish society in the Jewish state, but the state itself does not consider them Jewish.

For Israel, some 330,000 immigrants, mostly from the former Soviet Union, represent a big assimilation problem and a big political problem, made worse by the fact that the only solution for this largely non-religious group is seen as a religious one. And the remedy lies exclusively in the hands of the country’s state-sponsored Orthodox rabbis, who, under Israeli civil law, have sole authority to determine the Jewish status of the state’s citizens.

Now, the latest effort to address this problem has collapsed, as the Orthodox political party that was key to reform on many other fronts has balked. The religious-Zionist Jewish Home party, a member of the current government coalition, supported recent legislation to draft Haredim, or ultra-Orthodox Jews, for the first time; approved a liberalizing overhaul of marriage procedures, and created a modest dedicated space at the Western Wall for non-Orthodox prayer.

Yet the same party backing these religious reforms — the most progressive passed by any recent Israeli government — appears to have sabotaged a bill to help would-be converts.

That promises to leave the large number of Russian immigrants in Israel who are not considered Jewish under Orthodox religious law in limbo. They came into Israel under an immigration law that permits anyone who can claim one Jewish grandparent to become a citizen. But this large population now faces the disabilities imposed by other laws that use Orthodox religious law to determine one’s status as a Jew. This includes marriage law in Israel, where there is no civil marriage, and only individuals recognized as Jewish under traditional religious law may marry other Jews. Non-Jews wishing to marry Jews are forced to go abroad to wed, and then apply to have their foreign marriages registered and recognized in Israel. Except for converts, Orthodox religious law considers a Jew to be only someone with a Jewish mother.

The Israeli reality TV star Alin Levy, whose parents were born in the FSU, is the latest prominent person to get caught in this bind. Despite living a Modern Orthodox lifestyle, she cannot marry unless she converts or goes abroad. And as a condition of converting, she claims, the state’s Chief Rabbinate demanded that she abandon her television career.

It is unclear how many Jews from the FSU might be interested in converting. As it is, this overwhelmingly secular population has displayed little enthusiasm to become religiously Jewish, even as they become ever more part of Israel’s secular Jewish society. But today, anybody who wants a state-recognized conversion has to go through the centralized Conversion Authority, whose religious courts have a reputation for being unwelcoming and intimidating. Elazar Stern, a coalition lawmaker from the centrist Hatnuah party, proposed decentralizing the operation and allowing all municipal rabbis to perform conversions.

This would not have diluted the Orthodox standards for conversion; the Chief Rabbinate, which currently supervises the Conversion Authority, oversees all municipal rabbis. But Stern hoped that it would allow prospective converts the freedom to at least choose a rabbi that they find welcoming.

The Jewish Home party initially supported Stern’s bill. But then, just before the Knesset’s Passover recess, the party turned against it. Jewish Home’s switch followed the lead of the Chief Rabbinate, which feared a reduction in day-to-day control of conversion.

“They prefer to strengthen the Chief Rabbinate instead of helping citizens,” Stern’s aide Tani Frank complained in an interview with the Forward.

The bill is currently frozen and seen as having reached a dead end, thanks to the effective veto of Jewish Home politicians in the government. “They fail to understand that there’s a solution and that they may, at some point, have to go against the rabbinate to bring it about,” Frank said.

The most surprising part of the saga is the attitude that drives the rabbinate’s opposition to the reform: It doesn’t trust its own rabbis around the country. Municipal rabbis are the face of the rabbinate to most citizens — the only state rabbis they will ever meet. They are responsible for registering weddings and running religious services in their regions. But there is a “concern” in the Chief Rabbinate that some of them couldn’t be trusted to perform conversions according to proper religious standards, a source in the organization familiar with the topic told the Forward.

The source, who did not have clearance to speak to the media and therefore requested anonymity, said that municipal rabbis currently fulfill functions that are important but “reversible and not so severe according to Halacha,” the Hebrew term for traditional religious law. Conversion, he said, is a different matter.

About 2,000 Israeli citizens convert each year — mostly immigrants from the FSU who are not considered halachically Jewish and their offspring. Yet as a result of births and continued immigration, the number of residents in this demographic group lacking Jewish status increases by more than 5,000 people annually.

According to Seth Farber, an Orthodox rabbi who directs ITIM, an advocacy group for converts and prospective converts, this growth poses challenges to the assimilation of these immigrants for which Israel doesn’t have answers.

In a letter Farber showed to the Forward, one couple wrote that they had “given up on our dream of a Jewish home in Israel, and as a result halted the conversion process” more than a year after the non-Jewish partner decided to convert. They blamed the “degrading and arrogant” approach of the conversion court to which they were summoned — one of four run by the Conversion Authority. This included repeated interrogation, they said, as to whether they go to church, despite stating that they don’t. Farber, whose office received the letter, said that there are many converts who do not even get as far as this couple.

Another West European immigrant told the Forward she was told to marry her Jewish fiancé the same day she converted if she wanted a marriage license. The rabbis’ demand stemmed from the fact that the couple were already living together. The rabbis insisted that they should not be in each other’s company unmarried after the conversion, because of stringent religious modesty laws that would now apply to her as a Jew.

As a result, her family members, who live in Europe, couldn’t attend her wedding last summer. The rabbis “said they didn’t care and that we should just bring wine and bourekas [stuffed pastries] and it would be okay,” the woman recalled. “They ruined the best day of my life.”

Her wedding-day conversion was actually her third conversion to Judaism. The woman said that she had undergone a Conservative conversion in Europe and a conversion with the New York Orthodox rabbi Marc Angel, rabbi emeritus of Congregation Shearith Israel, the Spanish and Portuguese Synagogue in Manhattan. Neither of these passed muster with the Israeli rabbinate.

The couple’s unmarried co-habitation provoked harsh comments from the Israeli conversion court, the woman said. Members of the conversion court told them they “live like animals,” she recounted. The process made her feel like a “nonkosher piece of meat,” she said. Though she is now converted and married, she insisted her name not be published, due to the sensitivity of the subject.

While some liberal Orthodox religious-Zionists like Farber argued for Stern’s reform bill, the right wing of the Religious Zionist camp fought it tooth and nail. The influential rabbi Shlomo Aviner, head of Jerusalem’s Ateret Cohanim yeshiva, told the Forward that conversion is just too important to be entrusted to local rabbis. “Each rabbi decides things for his community, but with conversion, you are making decisions for the whole Jewish nation,” he said. “The rabbinate for this is the Chief Rabbinate, and only it should decide.”