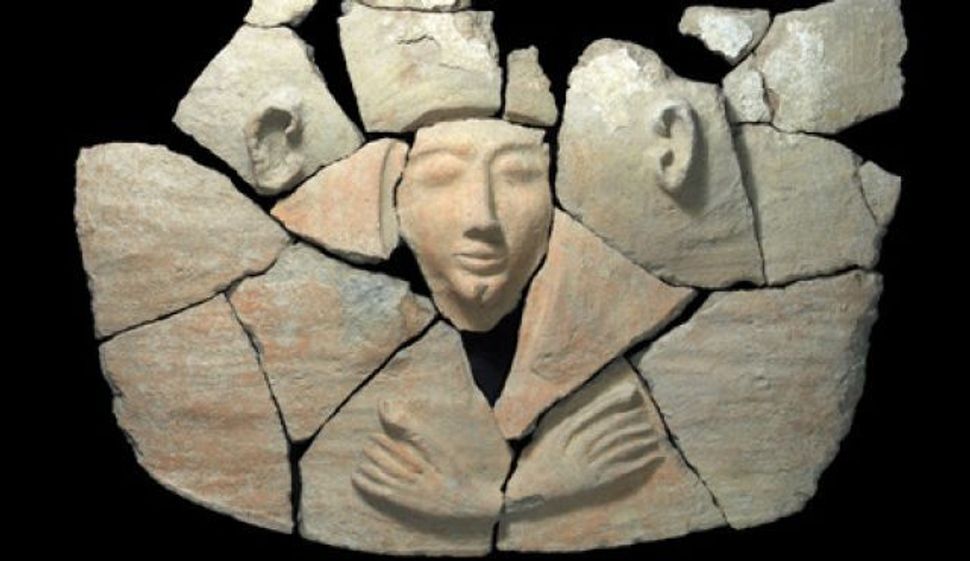 (Haaretz) — A 3,300-year-old Egyptian coffin from the time of the pharaohs has been discovered in the Jezreel Valley in northern Israel, the Israel Antiquities Authority announced.

The cylindrical clay coffin from the Late Bronze Age, which was discovered with the skeleton of an adult inside, has a cover fashioned in the image of a person, called an anthropoidal lid. It is the first anthropoidal coffin found in the country in 50 years.

A rare gold signet ring was discovered near the coffin, with the gold-encased scarab seal bearing the name of the Egyptian pharaoh Seti I. That Egyptian ruler is the father of Ramses II, identified by some scholars as the pharaoh mentioned in the biblical story of the Israelites’ exodus from Egypt, which Jews around the world will be celebrating on Passover next week.

The coffin, dating to the 13th century B.C.E., was discovered near Tel Shadud amid the skeleton of an adult and objects that appear to have been meant as religious offerings, including food storage vessels, tableware, cultic vessels and animal bones.

“As was the custom, it seems these were used as offerings for the gods, and were also meant to provide the dead with sustenance in the afterlife,” excavation directors Edwin van den Brink, Dan Kirzner and the Israel Antiquities Authority’s Ron Be’eri said in a statement.

The skeleton of an adult was found inside the clay coffin, and the researchers said the corpse appears to have belonged to an official of Canaanite origin who was engaged in the service of the Egyptian government, or to a wealthy person who imitated Egyptian funeral customs.

“An ordinary person could not afford the purchase of such a coffin,” the researchers said. “It is obvious the deceased was a member of the local elite.”

The discovery of the coffin at Tel Shadud is evidence of Egyptian control of the Jezreel Valley in the Late Bronze Age, the Israel Antiquities Authority said. During the period when the pharaohs governed the country, Egyptian culture greatly influenced the local Canaanite upper class.

The antiquities authority is looking into the possibility of sampling the DNA from inside the coffin to see if the deceased was originally a Canaanite or an Egyptian who was buried in Canaan.

The graves of two men and two women who may have been members of his family were also located near the coffin.

Next to the skeleton were buried pottery, a bronze dagger, bronze bowl and hammered pieces of bronze.