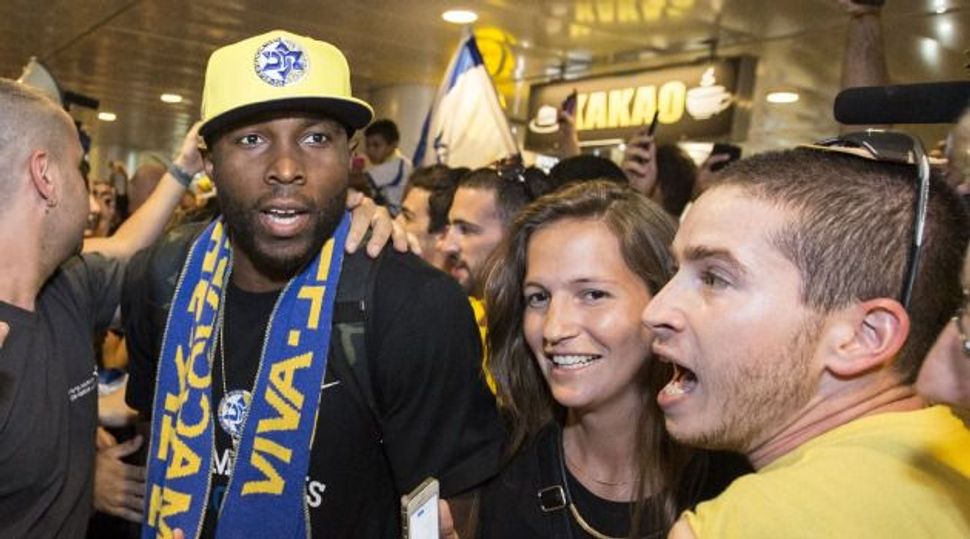 The excitement was almost enough to kill Israel’s 90-year-old president.

Right after Tel Aviv’s top basketball team won Europe’s championship crown in Milan in a nail-biting 96–86 victory that went into overtime, President Shimon Peres told the team’s coach by phone, “I watched the whole game and nearly had a heart attack.”

“You are heroes and have brought incredible pride to the State of Israel,” Peres told the Maccabi Electra Tel Aviv team, lauding their May 18 Euroleague victory.

The team’s return to Israel the day after its win appeared to more than vindicate Peres’s assessment that something extraordinary had happened. Thousands of fans, many of them dressed in Maccabi’s shade of yellow, gathered in Rabin Square for an open-air party where the players were cheered on, and everyone sang along to “We Are the Champions.”

It was the same day that the speaker of the Knesset set the date for the presidential election. But it was difficult to find reference to this long-awaited announcement, as images of the victory and the celebrations dominated television stations and print media. Prime Minister Benjamin Netanyahu put other duties on hold to host the team. He told the coach and players: “You brought great honor to Israel. I tell you that it was uplifting for all Israelis. You set an example.”

For many Israelis, their country’s prominence in the international arena for a reason completely unrelated to diplomatic matters was a welcome change. The recognition of a positive, apolitical national accomplishment was music to their ears.

In an interview with the Forward, the star of the game, David Blu, who scored 14 points and grabbed four rebounds, emphasized the point evident everywhere in the air: This was no mere team victory, nor was it even just a sports victory. “We didn’t just represent an organization or a city, we represented a people,” he said, “the Israeli people.”

In the thrill of the brief moment, few dwelled on the fact that the 12-member team consisted of seven non-Jewish foreigners and only five Israeli citizens, including three olim, or immigrants. Soon enough, some said that the country was getting carried away over a victory that shouldn’t, in actual fact, invoke national pride. Their critique was bound up with the broader questions of national identity that Israelis face.

Amal Jamal, author of “The Arab Public Sphere in Israel: Media Space and Cultural Resistance,” said that the victory was an “irrelevance” to most Israeli-Arabs, who constitute 20% of the population. They prefer soccer to basketball and view Maccabi Tel Aviv as a Jewish team, Jamal said.

But post-game reflection was not limited to the Arab sector on the question of just what nation was basking in the aura of national pride.

Noting the panoply of foreigners from Greece, Australia and elsewhere that made up the championship team’s majority, Zion Nanous, a sports journalist with the Mako website, posted on Facebook, “Great basketball team players triumphed against all odds and won the European Cup. No need to make this a national orgasm.”

Shalom Yerushalmi, formerly a political analyst with the daily Ma’ariv, claimed that a double standard is in play, given that Israel is taking a hard line against black foreigners from Sudan and Eritrea who have fled their countries and are seeking refugee status under international law, while it honors black and other foreign sportsmen with open arms.

“I have a question following the win of Maccabi Tel Aviv in the European Cup,” he wrote on the Maariv-affiliated NRG website. “If foreign workers… bring so much joy to so many people, why do we want to throw them out?”

He argued: “On the court in Milan yesterday, foreigners ran under a large Israeli flag that was hoisted in the stands. These players do not know Hebrew and barely know what the State of Israel is.”

Yerushalmi concluded by writing that for the team he supports, Hapoel Jerusalem, he does not expect to see a “bunch of mercenaries.” He insisted: “The base should be Israeli. If not, it cannot really represent me.”

Ilan Tamir, lecturer in communications at Bar-Ilan University, said that this kind of critique has received notable exposure in new media. “The classic newspapers featured it as a national achievement, but the new media are a different story,” he commented.

Haim Hagay, an expert in Israeli teams who is writing an ethnographic study of the Israeli sports press for his doctorate, said that Maccabi Tel Aviv is “not the sacred cow it was in the 1970s,” referring to the euphoria the team evoked when it won its first European Championship in 1977 (the latest was its sixth). This was partly due to the prominence of foreign players, he said, and partly due to the weakening of nationalistic identity since then.

But much of the Haredi community, who constitute 10% of the country’s population, has a hard time comprehending the joy at sports victories. In the summer, David Lau, the new Ashkenazi chief rabbi, told yeshiva students that they should not spend time watching basketball.

His supporters claimed he was not being racist, but rather stressing that players for Israeli teams are not actually Israelis, so there is no national pride in watching sports.

Following Maccabi Tel Aviv’s latest triumph, Shas lawmaker Nissim Ze’ev reportedly claimed that sports has become a “golden calf.” He said that people “made basketball and soccer a symbol of national pride instead of our rich Jewish culture.” Moshe Gafni of United Torah Judaism was quoted as saying: “We have become a country of idiots who do not respect the Torah. That’s what Israelis care about? A game for children in third grade?”

Part of Ze’ev’s reaction related to the origins of the players: “The team is imported from around the world. They are not Jews, but Israelis don’t care as long as they win.”

But despite the critics’ claim that Maccabi Tel Aviv’s achievements cannot be considered the achievements of Israelis or of Jews, the team actually reflects Israel-Diaspora ties and the ideal of aliyah.

David Blatt, the coach who built and directs the current line-up, is a Jewish immigrant to Israel from Boston. He made the move in 1981, after he had played basketball for Princeton University. An Israeli coach suggested that he move to Israel. There were no big bucks on offer; he was told to volunteer on a kibbutz and break into the country’s basketball scene. He did, and played for 12 years. Since 1993 he has coached, mostly in Israel but with a six-year stint abroad, in Italy, Russia and Greece.

Sylven Landesberg completed basic training in the Israeli army last year and took Israeli citizenship. The former “Freshman of the Year” for the University of Virginia Cavaliers was born to an American Jewish father and a non-Jewish mother from Trinidad and Tobago.

Alex Tyus, a key team member in the playoff run, is a practicing Jew. He converted to Judaism when he was a student at the University of Florida, after coming in contact with Jewish students and attending Hillel. Last season he played in Italy, and the previous season for Maccabi Ashdod. A citizen, he has also represented the Israeli national team.

Blu, the star of the final, was born to a Jewish mother. He has been a citizen for 12 years, represented Israel internationally and will retire and return to the United States in June. But he said that he will always maintain his connection with Israel.

“The enthusiasm for my Jewish identity has grown as I played here and lived here,” he told the Forward. “My mother died when I was 14, and when she died we stopped celebrating the Jewish holidays so much, but coming here has made me reconnect with Jewish life.”