Kidnapping Unites Jewish Community as Israel Splits Are Set Aside 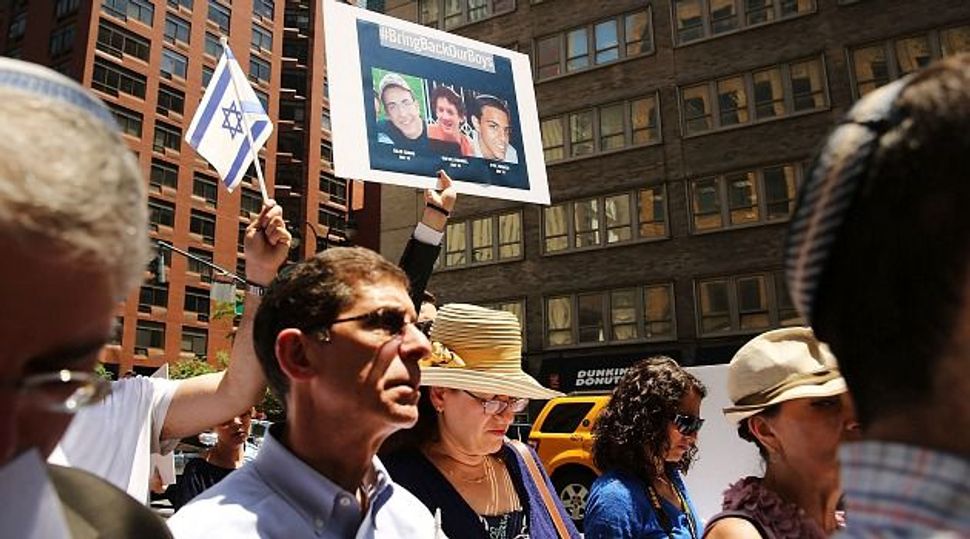 Rally for Teens: Americans rally outside the Israeli consulate to show support for the effort to bring back the kidnapped teenage boys. Image by getty images

In a rare moment of unity, the kidnapping of three Israeli teens in the West Bank has brought together a Jewish community deeply divided over Israel.

Debates over Israeli policy, often fraught with friction, were put aside as communal players from right to left joined in support of efforts to rescue the three yeshiva students and in prayers for their safe return. Much — though not all — of the almost reflexive digression into ideological statements and policy arguments was put on hold.

“These teens were not the perpetrators or the creators of the Occupation,” wrote Rabbi Michael Lerner, leader of the progressive Tikkun group. “They were children doing what their parents had brought them up to do and to be.”

In recent years, Israel, once a key unifying issue among American Jews from across a broad spectrum of religious and political beliefs, has become one of the community’s flashpoints. At the center of this internal conflict has been deep discord over the government’s settlement policies in the Israeli-occupied West Bank, its military rule over the 2.5 million Palestinians who live in the territory and its stance in peace talks with Palestinian leaders. But the June 13 news of three young Israelis being kidnapped while hitchhiking in the West Bank has suddenly put Jewish factions that barely speak to each other in the same boat.

“If there was a parade for this, you wouldn’t have all these people in the streets saying ‘NIF shouldn’t march’ or ‘the gay community shouldn’t march,’” said Rabbi Steve Gutow, referring to protests that took place before the recent Israel Day parade in New York against some of the participating groups, including the New Israel Fund. Gutow, president and CEO of the Jewish Council for Public Affairs, said that condemning the kidnapping of children is a universal value, not in any way a political statement. These types of actions, Gutow added, “are what divides between the civilized and the uncivilized world.”

The outpouring of support for the release of the kidnapped teens, who were hitchhiking to get back to their yeshiva in a West Bank settlement bloc before the Sabbath, was immediate and across the board. So was condemnation of their abduction, presumably by Palestinian terrorists.

“We pray for their safe return and urge everyone to include them in their prayers this Sabbath,” leaders of the Conference of Presidents of Major American Jewish Organizations said in a statement that set the tone for most other Jewish groups. Alongside condemnation of the kidnapping, groups and individuals organized prayers for the missing teens and put together solidarity rallies outside the Israeli Embassy in Washington and its consulate in New York.

The Presidents Conference, a national umbrella group of Jewish organizations, added in its statement a jab at the Palestinian Authority, which has recently sworn in a new government that enjoys the support of Hamas, a group regarded by Israel, the United States and many other countries as a terrorist organization. “The Palestinian Authority and the new ‘unity’ government must act decisively to assist in finding the youths and those responsible,” the group’s statement said.

Only some of the Presidents Conference’s member organizations joined the criticism of the P.A. But all vocally backed Israel’s demand for the return of the students. It was an opportunity for a broad array of activists to assert their inclusion in the communal tent, whose expanse is often contested. In the crisis of the moment, the tent flaps seemed suddenly to widen. “Those who don’t think Israel needs to be safe and secure,” Gutow said, “don’t fit in this tent.”

The young age of the victims evoked strong emotions on a human level, from activists on the communal margins to the establishment center. “As a mother, I understand how difficult it is,” said Rebecca Vilkomerson, executive director of Jewish Voice for Peace, a group that supports boycotting and divesting from Israel in order to bring an end to its occupation of the West Bank. In a tweet, JVP expressed its “firm hope for the safe return of three Israeli boys missing from a West Bank settlement,” adding that “all lives are precious.”

JVP’s statements avoided entering into the controversy over Israeli policies. But Vilkomerson later said in an interview that “unequal attention and weight” are given “to the lives of Israelis over the lives of Palestinians.”

Vilkomerson cited the May 15 shootings of two unarmed Palestinian youths from bullets that appeared to come from Israeli army snipers as the teens walked down a calm street in the West Bank town of Bitunya. Advocates for Israel, including the government’s former ambassador to Washington, Michael Oren, suggested publicly that Palestinians had staged the scene. An autopsy later found the two teens had died from live ammunition.

Prime Minister Benjamin Netanyahu’s government in Jerusalem has made a point of tying the abduction of the three yeshiva students to the formation of a new Palestinian unity government. Israeli political leaders argue that the P.A.’s acceptance of Hamas paved the way for the kidnapping. Netanyahu himself has charged that Hamas is responsible for the abduction, which occurred in a West Bank sector where Israel exercises exclusive jurisdiction. But thus far, Hamas has not assumed responsibility for the act, and Israel has not produced any evidence supporting Netanyahu’s charge.

In ordinary times, such an unsupported claim by Netanyahu would provoke fierce debate among American Jews. But even this claim went largely unchallenged in the current atmosphere of concern.

Hamas, while now part of the coalition supporting the P.A. government, has no seats in the Cabinet, which consists largely of technocrats. But mainstream groups such as the Anti-Defamation League adopted the Israeli narrative and put the blame on Hamas and on the P.A. for reconciling with Hamas and accepting its support. “Will they choose to continue on the path of aligning with forces promoting terror, violence and conflict?” the ADL asked in a statement, referring to the P.A. “Or will they reject this hatred and return to the steps necessary for reconciliation and peace?”

J Street, the dovish lobby that rarely sides with the current Israeli government, also laid the blame on Hamas. In a June 16 statement it quoted Secretary of State John Kerry, who spoke of “many indications pointing to the involvement of Hamas.” But J Street also stresse the positive role being played by the P.A. in supporting Israel’s efforts to locate the missing students.

Americans for Peace Now also offered prayers for the safety of the kidnapped teens and condemned their abduction unequivocally. But the group also supported the view of its sister organization in Israel “that this crisis should be viewed through the prism of Israel’s continued control of the West Bank and Gaza Strip.”

For Lerner, whose views on the occupation are similar, this case was not an occasion for fighting over Israeli policy. “It is appropriate to demand an end to the occupation of the West Bank, to the occupation of Tibet by China and Chechnya by Russia and an end to every other unjust denial of rights to people who want their freedom,” Lerner wrote. “Yet none of this should replace our outrage at the acts of kidnapping that go on in the meantime.”

Kidnapping Unites Jewish Community as Israel Splits Are Set Aside