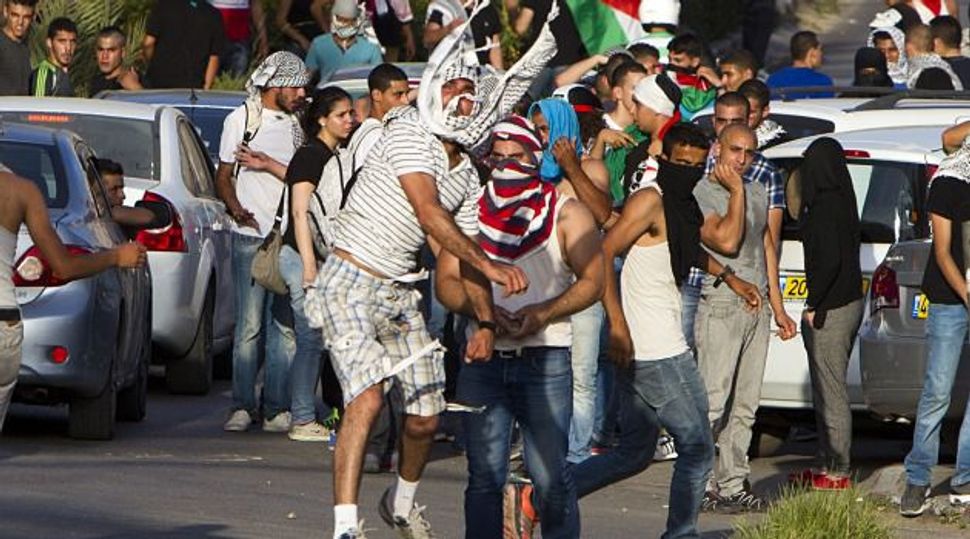 One Movement, Two Sides: The Islamic Movement in Israel split into two branches in the 1990s. The Southern Branch is seen as relatively moderate, while the Norther pursues a hard-line agenda, calling for the abduction of soldiers during a protest at Umm-al-Fahn. Image by Getty Images

Once Israel completes its latest military campaign in Gaza against Hamas, the government has its sights set on a domestic enemy who shares the Islamist group’s ideology and aims.

Prime Minister Benjamin Netanyahu announced at the end of June that he is working on criminalizing the Islamic Movement, a radical organization based inside Israel’s pre-1967 borders.

The Islamic Movement promotes Islam among Arab citizens of Israel through its social, religious and political activities. It split back in the 1990s, when the southern branch accepted the Oslo peace process. This branch is seen as relatively moderate and participates in the Israeli democratic process, forming part of the United Arab List, which has three seats in the Knesset.

By contrast, the northern branch boycotts Israeli politics and refuses to stand for the Knesset. It rejected the Oslo process, and follows a hard-line agenda. Its main focus is welfare and political education, and the highlight of its calendar is an annual rally where it trumpets claims that Israel plans to destroy the Al-Aqsa Mosque in Jerusalem.

The leader of the Islamic Movement’s northern branch, Raed Salah, served two years in an Israeli prison for raising millions of dollars for Hamas. He has been banned from visiting the United Kingdom as well as being charged in Israel for incitement to violence after allegedly making blood libel claims. While there are no reliable estimates of how many people sympathize with it, the group attracts tens of thousands of people to its “Al-Aqsa Mosque in Danger” rally — one of the key events that would be halted if the group were declared illegal.

The catalyst for Netanyahu’s planned crackdown came during the search for the missing Jewish teenagers in June, when calls were heard at a rally in the northern Israel city of Umm al-Fahm for the abduction of soldiers. While the protest wasn’t organized by the Islamic Movement, it took place in its heartland.

Netanyahu declared: “In many cases, those behind such calls and demonstrations are from the northern branch of the Islamic Movement. It constantly preaches against the State of Israel, and its people publicly identify with terrorist organizations such as Hamas.

“Therefore, I directed the relevant authorities to consider declaring the northern branch of the Islamic Movement an illegal organization. This would give the security authorities significant tools in the struggle against this movement.”

The actual process for the ban will take place through Israel’s legal system, and government lawyers will need to put forward a case to support it, highlighting how exactly its activities fall foul of the law. The government is expected to allege links with terrorist groups and to substantiate its case with these allegations.

There was applause for Netanyahu’s announcement on the Israeli right. Ari Briggs, a senior official in the Regavim activist group, told the Forward that he sees the move as parallel to attempts to crack down on extremists from the Israeli right who perpetrate “price tag” attacks on Palestinians and their property. The Islamic Movement is “as damaging to Jewish-Arab relations in this country, if not more so, [as] the crazy people doing ‘price tags,’” he said.

Ahmad Tibi, leader of the Knesset Ta’al faction and the best-known Arab in Israeli politics, is furious, claiming a double-standard is in operation whereby Jewish politicians can say what they want while Arab activists can’t. “If parties were outlawed due to a sentence, there would be no parties in Knesset or in the coalition,” he told the Forward.

Some in the Israeli government have pointed out that the Muslim Brotherhood, whose ideology the Islamic Movement represents, is illegal in states surrounding Israel. “In all countries in the region they are illegal, and only in Israel they incite and strive freely against the existence of the state,” transportation minister Yisrael Katz declared, calling this situation “absurd.” But Tibi considers this is irrelevant “because Israel is claiming it’s a democracy.” He commented, “If you are joining the totalitarian countries’ club, you can do the same.”

Asad Ghanem, an Arab professor of political science at Haifa University, believes that outlawing the Islamic Movement’s northern branch would undermine Israel’s democratic credentials. “If you want to include Arabs, not exclude them, you should accept their political representatives,” he said.

In his view, banning the movement is not only unjustified, but also unwise. “If they exclude them [and put them] outside the boundaries of the law, then you [can] expect them to do nothing or to do something which is from their point of view more effective,” he said, referring to possible violent acts.

The cause-and-effect dynamic of a ban is the big question in the security establishment. “There is a continuous debate in security circles as to whether to ban it and drive it underground or keep it above ground,” said Hillel Frisch, researcher at Bar Ilan University’s Begin-Sadat Center for Strategic Studies.

Frisch, an expert on Islamist movements, said that Netanyahu’s decision actually runs against the grain of the security establishment, where there is a “pretty large consensus that it’s best to keep it above ground.”

Serving security officials are not commenting on the subject, but Shaul Shay, former deputy head of the Israel National Security Council, told the Forward that he veers toward keeping it permitted. “There is no doubt that this Islamist party, by its definition, is a horrible organization, but the question is more tactical than principled,” he said. “I think it’s better to permit a certain degree of illegal actions of the party and channel them into nonviolent actions than to put very strong pressure and force them to go underground.”

He thinks that banning the group could cause the aggressiveness of its activities to “spiral” and have limited impact, because “in a digital era, effective delegimization of an organization is limited.”