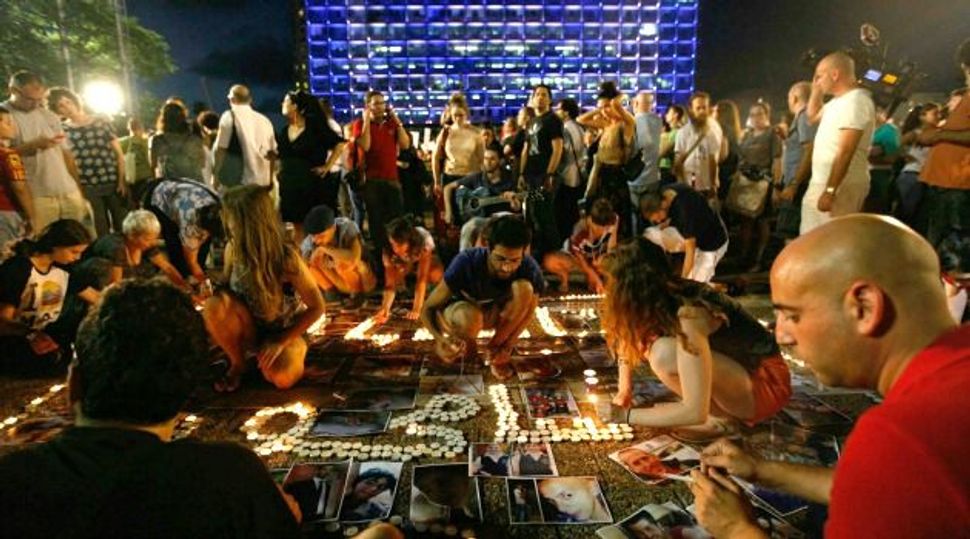 (Haaretz) — Thousands assembled at Tel Aviv’s Rabin Square on Saturday evening for what became the largest protest against the Israeli military operation in Gaza thus far. According to official estimates some 7,000 protesters attended.

Meanwhile, a smaller group rallied in support of the operation in Gaza. The police served as a barrier between the groups to prevent clashes.

The former demonstration was organized by Hadash, the leftist political party, and the organizations Combatants for Peace and The Parents Circle Families Forum. Several hours before the protest was slated to begin the police announced that it was canceled for fear of rocket fire, but once news that the cease-fire would be extended surfaced, the demonstration was once again given the green light.

Protesters at the event called for an immediate end to hostilities and for the prompt resumption of peace talks. In one of the plaza’s corners memorial candles were lit among pictures of fallen – both Israelis and Palestinians. Two Philippine women who attended the protest laid a bouquet of flowers in memory of the IDF casualties. “We aren’t a part of the demonstration,” one of them explained. “We came to show our gratitude to Israel for its help with the casualties of the typhoon in the Philippines last year.”

Among the people to give speeches at the event were Capt. Assaf Ya’akobovich (Res.) and Salim Tabib of Ramallah. The two are active in an organization devoted to finding a peaceful solution to the Israeli-Palestinian conflict. They called for both sides to immediately put down their arms.

Especially moving was the speech given by Ben Kfir, a resident of Ashkelon, whose daughter was murdered by a member of Hamas in 2003. “In Gaza they are digging concrete tunnels and we are erecting a separation fence,” Kfir said. “How sad it is that we can’t channel these efforts for peace.” He also said “The infrastructure of terrorism is ignorance, poverty and despair. It is with these we must deal.” 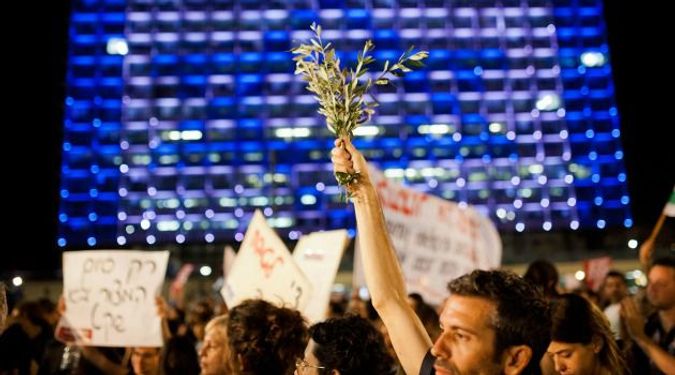 MK Dov Khenin (Hadash) called on the Israeli government to support a Palestinian unity government headed by Mahmoud Abbas. “So many heartbreaking moments happened this month,” Khenin said at the rally. “A son crying over his father’s grave, a mother weeping for her son, and many pictures of the wounded and dead. Behind each picture is a name, a family. We must answer truthfully: Has a drop of all this bloodshed really helped bring us to a better place?”

Prof. Eva Illouz also gave a speech at the demonstration. She commented on the right-wing incitement. “The left has 150 years of experience dealing with this incitement and it knows how to combat it,” she said.

The ill-will felt towards the Israeli left could be gaged well among the group of right-wing protesters that the police corralled in a separate part of the plaza. They continually shouted “Death to the leftists” and expressed hope that “a rocket from Gaza” would kill them. In addition they merrily sang “Why is there no school in Gaza? Because no more kids are left.” Some protesters tried to convince this group to stop singing these songs as they were detrimental to the message of support for the IDF that they were trying to promote, but to no avail.

Later in the evening these right-wing protesters tried to break through the police barrier into the greater demonstration and even succeeded for a short while to block Ibn Gevirol St., one of Tel Aviv’s major arteries. The police quickly pushed them out of the street with cavalry. During the clashes four protesters were arrested. Due to these outbursts of violence the police asked the organizers to cut the protest short. The demonstrators eventually left without incident.