Anti-Israel Professor Returns to Trinity College — Will Controversy Come Back Too? 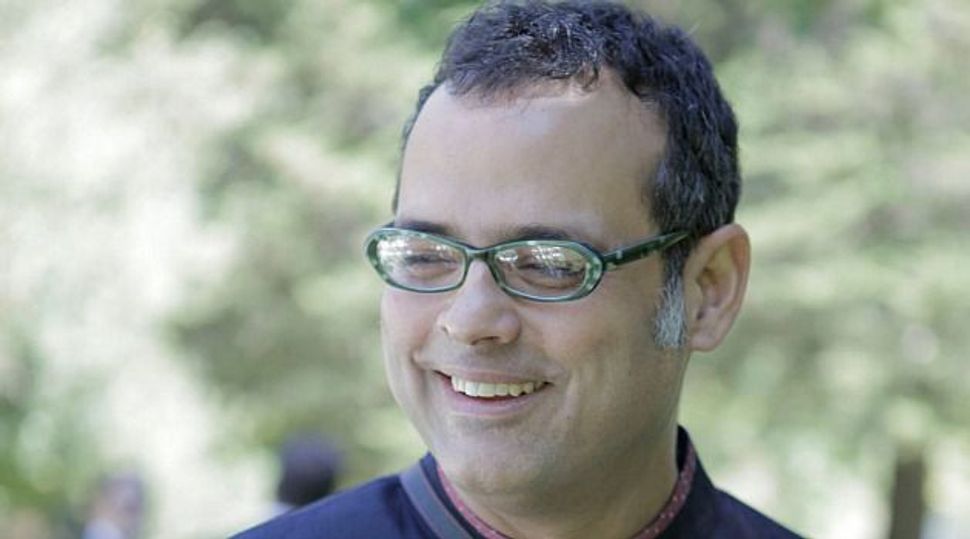 Image by courtesy of Vijay Pradash

Professor Vijay Prashad returned this week along with students and faculty to Trinity College in Hartford, Connecticut, after a two-year sabbatical.

The scholar, as charismatic as he is controversial, has been at the center of a debate pitting pro-Israel colleagues and activists against the college administration. The feud centers on Prashad’s support for the academic boycott of Israel and the impact these views should have on his career.

E-mail exchanges obtained by the Forward and interviews with key players offer a dramatic new look at the fight over Prashad that rocked Trinity four years ago — including one from the anguished president of the college who admitted having sleepless nights over the issue.

“Whatever happens,” then-Trinity President James Jones wrote, “I will at the end of the day have to take responsibility for our actions, knowing that unless we take the pressure out of the cooker, it may explode in untoward ways that will harm the College.”

The Prashad feud mirrors in many ways the fierce fights over Israel now roiling campuses from coast to coast. At the University of Illinois, administrators pulled an offer of a position for Professor Steven Salaita because of his anti-Israel tweets during the Gaza war. And pro-boycott activists are planning new rounds of protests against Israel as students flood back to college for the new academic year.

The fight over Prashad could prove instructive for both sides in current and future cases. It depicts the role played by Jewish organizations from outside the campus, the internal strife among faculty members, and above all the insistence of all parties that the debate cannot be seen as infringing on academic freedom. Trinity resolved the issue by separating boycott talk from official college business. It is a resolution that kept both sides less than satisfied, but allowed tensions to subside.

Born in India, Prashad studied in the United States and has become a prominent scholar and journalist, taking on what he describes as a Marxist point of view when examining world affairs. As such, Prashad acquired a reputation as a harsh critic of American foreign policy, of Israel and its actions toward the Palestinians, and of Hindu nationalism.

College administrators have viewed Prashad as a rising star. He is a magnet for students flocking to his courses and a source of prestige for the institution thanks to his nationally recognized work and persona.

But supporters of Israel on campus and in the Jewish community of Hartford, Connecticut, have followed with increasing concern Prashad’s writings on Israel and were especially alarmed when he joined the advisory board of the U.S. Campaign for the Academic and Cultural Boycott of Israel. When Prashad was appointed in 2010 to head the college’s newly established Trinity Institute for Interdisciplinary Studies (TIIS), the war of letters broke out.

“We write to protest the appointment of Professor Vijay Prashad to head the College’s new Institute for Interdisciplinary Studies,” opened a group of 14 professors their letter to Trinity’s dean and to the college president. “We do so because we believe that the prominent role he has played in promoting a boycott of Israeli universities and of study abroad in Israel puts him at odds with the fundamental values of the academy.”

Prashad immediately responded with a lengthy letter to TIIS board explaining his views. “Nothing I write, I believe, is anti-Israel,” he stated, adding that the boycott movement he supports does not demand boycotting Israel but “only makes recommendations.”

He followed up with a private letter to Jones, then president of Trinity, calling the campaign against his nomination a “political assault.” Prashad told the Forward he had offered several times to resign from his new post.

Responding the next day, president Jones wrote that he had “lain awake much of the night” contemplating the issue. Meanwhile, pressure continued to mount.

The faculty letter, organized by Ron Kiener, a professor of religion and head of Trinity’s Jewish studies program, drew the attention of Hartford’s Jewish communal leaders who also decided to take action.

Trinity was established in 1823 as an Episcopalian liberal arts college. It began to accept female students in 1969. In recent decades the school became a popular choice for Jewish students, who now make up more than 10% of the student body.

Regional Jewish leaders first looked into the Parshad nomination in early June 2010, but their attempts to arrange a meeting with Trinity’s president were met with refusal. Kiener, in a strongly worded letter to Jones, protested the snub. “I absolutely and unequivocally recommend to you that you personally take the meeting with the leaders of the state’s Jewish community,” he wrote. “Never in my worst nightmare could I imagine a scenario in which the leaders of the Jewish community…would ask to meet with the President of Trinity College and not be granted a meeting.”

Jones agreed and on September 14 he sat down with Robert Fishman, executive director of the Connecticut Jewish federation, Gary Jones, regional director of the Anti-Defamation League, and Laura Zimmerman, associate vice president of the Jewish Community Relations Council for Greater Hartford.

“We understood that outsiders are less effective on campuses than insiders,” Fishman told the Forward, “that’s why we came to the table at Trinity with the backing of insiders so the president will see how serious it is.”

The Jewish leaders did not ask for Prashad’s dismissal, but they expressed their concern over his appointment. They also asked for assurances that Trinity as an institution will not support academic boycott on Israel. Jones, according to participants, gave them a verbal commitment that Trinity College will continue to oppose boycott and that Prashad, when speaking on this issue, will not do so on behalf of the institution.

“We wanted him to know that we didn’t go directly to Jewish donors to weigh in,” he said, “but we left it open that this was a card to play if the verbal commitment wasn’t honored.”

Jones turned down the Forward’s requests for comment on the issue, saying it would be improper for him to speak because he has since retired.

Prashad, a prolific writer in both academic and popular publications, said he did not use his Trinity affiliation when writing about Israel. He did, however, take issue with the Jewish community’s choice to take the case directly to the college administration. “When they brought in three outsiders to pressure the president, that struck me as peculiar and unseemly.” Fishman, in response, said that he does “not generally sit down with BDS supporters.”

Trinity, at the end of the day, chose to back Prashad and forcefully turned down attempts to demote him. At the same time, the college made clear it does not support boycotting Israel.

Former dean Rena Fraden, wrote a response letter to petitioners in which she gave Prashad her full backing. “Until I have reason to believe that he has violated academic freedom in practice here at Trinity, I stand by my appointment and will not ask him to resign from the directorship,” Fraden wrote in a an email she later provided to the Forward. Fraden stated in the letter that she does not judge faculty members by their political views and stressed that academic freedom is “paramount” to her decision.

Critics of Prashad found the administration’s response unsatisfactory, though they admitted that the professor did not promote boycott on campus since taking the position as TIIS director and even hosted at least one Israeli cultural event.

When seen as breaking that rule by telling a South African newspaper in a 2011 interview that he would “close my door to an Israeli institution that does not make a forthright criticism, as an institution, of the occupation,” Kiener alerted the administration, but no action was taken.

Both sides to the debate have forcefully turned down claims that their actions infringed on academic freedom. Prashad argued that his support for boycotting Israeli academics couldn’t be viewed as limiting academic freedom. Signers of the petition, on the other hand, tried to make clear they are not speaking out against Prashad because of his views, but rather because he supports academic boycott on Israel.

“Many professors believe that the protection of academic freedom regarding political statements means that there will not be any critical pushback,” said Kiener. “I believe that you can say whatever you want and then its part of the marketplace. There is no blanket protection.”

Tensions were slow to cool at Trinity. Prashad got caught in national media headlights and became a target for Fox News after suggesting the May 1, 2011 killing of Osama Bin Laden was illegal.

Earlier this year, Prashad reignited the debate over Israel, after publically denouncing Trinity college presidents’ decision to sign on to a letter opposing the decision of the American Studies Association to boycott Israel.

Now, back at campus, Prashad looks back at the debate and concludes it was a “terrible thing for a college” to have its faculty members choose a side on a political debate. But, he noted, that such tensions are part and parcel when dealing with Israel.

Mark Silk, director of Leonard Greenberg Center for the Study of Religion in Public Life at Trinity who also signed the petition against Prashad noted that the heated debate among faculty members didn’t create any long lasting damage to relations on campus. “After all, what’s the point of having academic institutions if there are no debates?” he asked.

Both Prashad and his critics view the debate as over and even report amicable personal relations among faculty members of both sides of the divide.

But activists and Jewish communal leaders look forward with fear that recent events in Gaza will make life on campus much more difficult than during the Prashad debate.

“I expect this upcoming semester to be terrible,” Kiener said. Israel’s Gaza operation, he noted “will only deepen the call for BDS on campus and I won’t be surprised to hear an overt anti-Semitic tone.”

Anti-Israel Professor Returns to Trinity College — Will Controversy Come Back Too?