Why Is Government Seeking To Kill United Against Nuclear Iran Lawsuit? 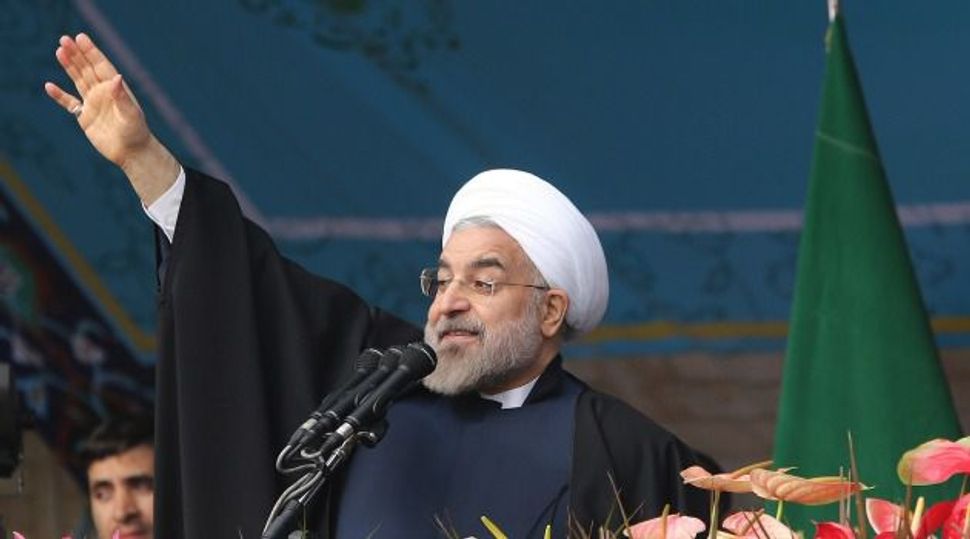 Classified Questions: Hassan Rouhani’s government is in the midst of tough talks on a nuclear deal as Washington intervenes in complaint that UANI abused its watchdog mission to aid big donor. Image by getty images

When federal investigators found in 2005 that two senior staffers with the American Israel Public Affairs Committee had received classified information from a midlevel Pentagon official, they pressured the pro-Israel lobby to fire the two men. Then they prosecuted the pair, and the Pentagon official who gave them the information, under the 1917 Espionage Act.

That was under the administration of George W. Bush. In September the Justice Department under President Obama disclosed that another nongovernmental lobbying group had somehow gained possession of highly sensitive, classified information.

But in this case the government is protecting United Against Nuclear Iran, a group that has worked closely with the Jewish community, by moving to quash a private civil suit against it.

The Justice Department is doing so on the grounds that trying the case will reveal the secret information in UANI’s possession. But legal experts observing the case are riveted by the unprecedented nature of the government’s intervention.

“It’s hard to construct a scenario that will explain the government’s actions,” said Steven Aftergood, director of the project on government secrecy at the Federation of American Scientists, who added: “It’s a mystery.”

The government’s power to simply kill lawsuits before they’re tried under the so-called “state secrets privilege” is a controversial one. It has, among other things, been used in the past to stop lawsuits filed against the state by alleged victims of government misconduct. It’s a power, ironically, that Obama’s attorney general, Eric Holder, had vowed to limit following its frequent invocation by the Bush administration. In one instance, the Bush Justice Department used it to quash a suit filed by a man suspected but ultimately exonerated of terrorism. Maher Arar’s suit charged that the government had illegally detained him and secretly shipped him off, with no due process, to Syria where he was tortured.

But the government’s use of this power in the UANI case, legal experts say, stands out from others for several reasons. For one, it’s the first time anyone can recall the government stepping in to completely kill a case between two private parties rather than to stop specific witnesses from being called to testify or specific documents from being subpoenaed. Also unprecedented is the government’s refusal to offer any explanation.

”I can’t remember another time in history when the government tried to blow up a lawsuit between two private parties without telling us why, even in broad, general terms,” Ben Wizner, director of the American Civil Liberties Union’s privacy and technology division, told Mother Jones magazine.

Founded six years ago by a bipartisan slate of politicians, former ambassadors, veterans of America’s security establishment and scholars, UANI aims to engage the private sector in battling Iran’s nuclear ambitions. One of its key tactics for achieving this goal has been tracking closely, and publicly disclosing, international companies doing business with Iran. In one case, two years ago, UANI launched a campaign against the Italian automaker Fiat for selling cars and trucks to Iran. The organization asked Jennifer Lopez, the company’s celebrity presenter, to drop her endorsement. (She declined.)

The UANI case dates back to 2013, when Victor Restis, a Greek ship owner, filed a defamation lawsuit in New York against the group. Restis, a controversial businessman who had previous legal troubles in Greece, claims he was a victim of UANI, which named him as someone conducting business with the Islamic state.

Restis maintains that he had no such ties. As part of his suit, he is demanding that UANI disclose documents, including a list of the group’s donors. The Greek plaintiff believes that one reputed key donor, Jewish hedge fund millionaire Thomas Kaplan, could be behind his being named, because of business rivalries Kaplan has with Restis. UANI’s CEO, former ambassador Mark Wallace, is a director on the board of Kaplan’s company, Tigris Financial Group, one of the country’s largest investors in gold and other precious metals.

Wallace reports on 2012 IRS documents — the most recent available — that he works 30 hours per week for UANI as the group’s top lay leader. But he had not, as of then at least, gotten paid by the group since 2009. How much Kaplan pays him for his work at Tigris, a privately held company, and how many hours he puts in there, is not public.

When the Justice Department petitioned the court [to dismiss]( (http://www.cnn.com/2014/09/13/politics/white-house-invokes-state-secrets-lawsuit/ ‘to dismiss’) Restis’s lawsuit September 12, its assertion that the suit would expose government secrets and thus endanger national security raised multiple questions. Outside observers wondered what government secrets a nongovernmental organization that had never engaged in any government contracts might possess, and from whom it got them. The administration’s actions were also puzzling because of its otherwise zealous pursuit of those who leak classified information. Under Obama, the Justice Department has used the Espionage Act to prosecute more leakers than all his predecessors combined.

Groups and individual known to be critical of Israel have speculated that UANI’s ties with Israel run deep and include intelligence sharing that the Justice Department is now trying to keep under wraps. Clues suggesting such cooperation lay not only in the presence of former Mossad chief Meir Dagan on UANI’s board; according to Restis’s lawsuit, the Greek ship owner was also approached by Israeli businessman Rami Ungar, who tried to settle the suit on behalf of unidentified supporters of UANI.

Another reason for the federal officials’ action could be fear that the suit would reveal classified information provided by American intelligence agencies themselves directly to UANI. If true, this would suggest that the government of the United States had broken the law by providing classified information to a private body and that UANI had allegedly done the same by holding such information.

Jewish groups that have worked closely with UANI include The Israel Project, the Jewish Community Relations Council of New York and the Conference of Presidents of Major American Jewish Organizations. Alan Solow, who served as chairman of the Presidents Conference from 2009 to 2011, served at the same time as a member of UANI’s advisory board.

Once decided, the UANI-Restis case will provide important guidance as to the direction Obama and Holder wish to take regarding the use of the state secrets privilege. It will give a clear sense of whether the Justice Department under Holder will continue to limit the use of this privilege or will instead now seek a broader mandate, similar to that of the Bush administration.

For UANI, the case, if it ever reaches a trial, can either dispel or confirm claims about its leaders’ alleged conflict of interest. Speaking to the Forward on September 22, Wallace rejected any notion that UANI under his leadership went after Restis to help the business interests of his friend and boss, and alleged UANI donor, Kaplan. “That’s a ridiculous assertion,” Wallace said.

He also dismissed suggestions that the outcome of the Restis case could adversely impact a new initiative based on UANI that he and others involved in the group are launching to focus more broadly on countering terrorist groups.

The new organization, the Counter Extremism Project, carefully refrained from defining Islamist extremism as its focus, but Wallace made clear that even if not mentioned by name, it is the Islamists that CEP is worried about. “The only extremism right now that is a threat to our national security are those who seek to pervert Islam to an insidious ideology,” he said. The lion’s share of his group’s activity will consequently be focused on such groups as Islamic State in Iraq and Syria, Al Qaeda and Boko Haram, Wallace said.

CEP is made up of many of the same faces that populate UANI’s board, including Wallace, former Bush White House homeland security adviser Fran Townsend, former Obama arms control coordinator Gary Samore and former independent senator Joe Lieberman. Its donors’ list is also secret, but the group acknowledged that Kaplan is one the contributors to the new operations.

In a September 22 New York press conference launching the initiative, its leaders declared that CEP’s mission was to “peel the onion of illicit financing” that allows extremist groups to operate.

Also on September 22, the New York judge hearing the UANI case scheduled a conference for early October to debate the government’s request to dismiss the lawsuit. If the court upholds this request, the mystery shrouding the case will remain sealed in court files.

Aftergood believes the case raises serious concerns about government secrecy and privacy. “The fact that one of the parties identified by UANI is disputing it in court raises a question about UANI’s sources and the way it conducts its business,” he said.

Why Is Government Seeking To Kill United Against Nuclear Iran Lawsuit?