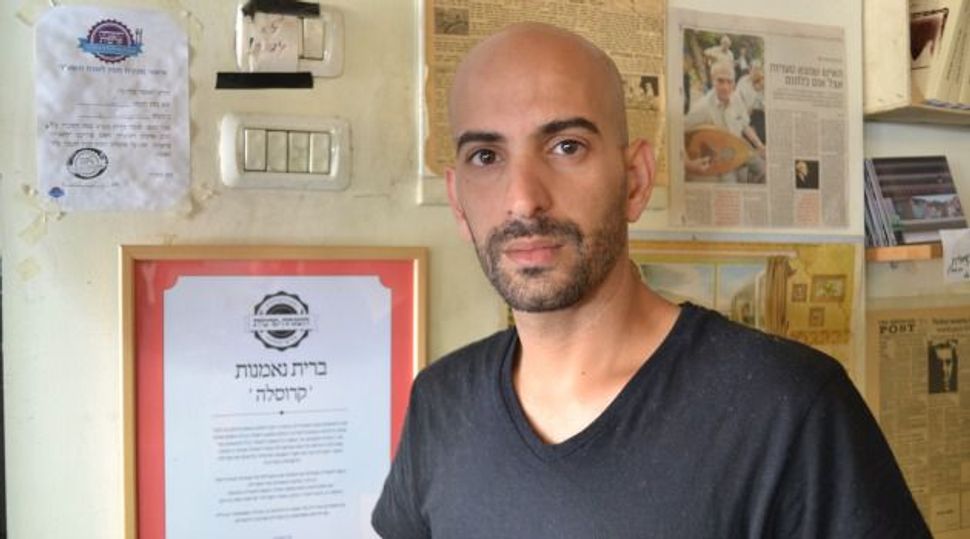 New Definition: Yonatan Vadai, owner of Carousela, is one of a small but growing number of restaurant owners using a new certification that challenges the Israeli rabbinate’s monopoly on the word ‘kosher.’ Image by Naomi Zeveloff

Carousela is an offbeat Jerusalem cafe with ornate wooden seats, vintage photographs of Yemenite women, posters of the British Mandate-era “Palestine Post” and a menu with several different types of shakshuka, or eggs poached in tomato sauce.

But that’s not what makes this restaurant so unusual. That would be its kashrut status.

Carousela is one of the only eateries in Jerusalem with a private kosher accreditation from a new group called Hashgacha Pratit. The group’s name is a Hebrew play on words, meaning both “private supervision” and “divine providence,” and it aims to fundamentally change the way Israel does kosher.

As it stands today, kosher certification in the Holy Land is controlled by the state-sponsored Chief Rabbinate, the Israeli authority in charge of Halacha, or Jewish law. Unlike in the United States, where private groups like Star-K or the Orthodox Union set kosher standards, in Israel kosher restaurants, grocery stores and factories must pass muster with the state rabbinate. To use the word “kosher” in advertising or publicity without the rabbinate’s approval is a violation of the 1983 Kosher Fraud Law, punishable by a fine of $270 to $540, and by the publication of the offending business’s name on a rabbinate website.

Over the past two years, restaurateurs in Jerusalem have become increasingly vocal in their frustration with the rabbinate, which they characterize as an unchecked bureaucracy that extracts hefty fees and provides little oversight in return. But they have been unwilling to forgo the certification, lest they lose their traditionally observant customers.

Enter Hashgacha Pratit. Though the group doesn’t use the word “kosher” on its certificates, it trains and evaluates restaurants in line with Jewish dietary law. Implicitly, the group challenges the relationship between religion and state in Israel by conveying to the Jerusalem public that the rabbinate isn’t the only kosher guarantor in Israel.

So far, Hashgacha Pratit has certified eight Jerusalem restaurants and has won the support of prominent Jerusalemites, including Deputy Mayor Rachel Azaria. But the group has a long way to go before it becomes mainstream.

“We are on a grassroots level where Judaism is being revitalized,” said Aaron Leibowitz, the Orthodox rabbi behind Hashgacha Pratit. “A lot of places identify with what we’re doing.”

The rabbinate, for its part, maintains that businesses claiming to be kosher without its teudah, or certificate, are breaking the law. “It is not only the law, but the public trust,” said Ziv Maor, a spokesman for the rabbinate. “When someone sells nonkosher food as kosher, well, the public should be concerned.”

Carousela’s owner, Yonatan Vadai, opted for Hashgacha Pratit certification earlier this year. He opened the restaurant in 2009 and immediately sought a teudah from the rabbinate. It was an economic decision, he said, to appeal to kosher observant customers. But he quickly became disillusioned when he learned he would be paying a monthly fee directly to the mashgiach, or kashrut inspector, who supervised him, an arrangement that seemed to him to be ripe for abuse. To Vadai’s frustration, the mashgiach did little more during his twice-weekly than glance at the restaurant’s shopping receipts, without providing in-depth guidance on how to run a kosher kitchen. But if the mashgiach was too lenient, the area supervisor, who visited once a month, was overly harsh, Vadai said. “He used to come like a sheriff, without asking, opening the door and shouting. It was really unpleasant.”

Three years ago, Vadai stopped paying his monthly fee. This led to a confrontation with the supervisor, he said, in which Vadai gave back his certificate. (When asked why Carousela lost its teudah, Maor said that Vadai refused to let inspectors inside to make sure the kitchen was cleaned appropriately for Passover. Vadai disputes this account.)

Carousela began a new era as a nonkosher restaurant and lost several kosher observant customers. “Some people came to me and told me, ‘I’m sorry, we will not come here anymore,’” Vadai said.

But Carousela soon afterward became the staging ground for Jerusalem’s restaurant revolt of 2012, a highly publicized movement to challenge the rabbinate’s monopoly on the word “kosher.” And Hashgacha Pratit, in turn, was born of that campaign.

Today, Avivit Ravia, Hashgacha Pratit’s kosher supervisor, visits Carousela several times a week. Ravia was trained in kosher certification by Emunah, an Orthodox women’s Zionist organization, but was barred from working as a rabbinate-approved mashgiach because of her gender. After Emunah petitioned the Israeli High Court, the rabbinate changed its position and Ravia and her classmates were allowed to take the mashgiach exam. In the meantime, Ravia has been teaching Carousela’s staff the intricacies of kosher law.

“There are many people who believe in us and believe in the idea. People are asking questions. ‘How can I be sure that it is really kosher when there is no mashgiach here all the time?’ But we are working from here,” Ravia said, pointing to her heart. “We really want to do things in a good way.”

Another Jerusalem restaurant certified by Hashgacha Pratit is Topolino, in Jerusalem’s Mahane Yehuda market. Topolino’s owner and chef, Shye Ghini, said he had no issues with the rabbinate, except for when it came to the greens served at his Italian restaurant. Kosher restaurants in Israel must serve a bug-free type of lettuce commonly called Gush Katif, after the Gaza settlement where the produce was originally grown. But Ghini said that the Gush Katif greens were limp, flavorless and loaded with pesticides. Buoyed by a 2012 halachic ruling by Israel’s chief Sephardic rabbi that cautioned against using the lettuce — but was never adopted as rabbinate policy — Ghini refused to serve the Gush Katif greens. Instead, he sourced other greens that he cleaned with vinegar and water. That decision cost him his teudah and, he estimates, 30% of his clientele.

Ghini acquired the Hashgacha Pratit certification six months ago; it does not require Gush Katif greens. “Some people want rabbanut, some people want Leibowitz,” Ghini said, referring to the Hashgacha Pratit certificate, which is signed by Rabbi Aaron Leibowitz. “I don’t know if the customers I lost came back, but new people came. The business is back to where it was.”

The Jerusalem rabbinate fined both Topolino and Carousela, contending that they used the term “kosher” in written material on the Internet in violation of the Kosher Fraud Law. Ghini and Vadai deny this and are now appealing the fine in Israel’s high court with the help of the Israel Religious Action Center, the public and legal advocacy arm of the Reform movement in Israel. They are also petitioning the court to strike down the Kosher Fraud Law, which would upend Israel’s kosher certification system.

Though Hashgacha Pratit is not involved in the case, Leibowitz wants to bring the issue of the rabbinate’s monopoly on the word “kosher” to the highest level of Israel’s legal system. “The drive behind our project is ideology and activism,” he said. “When the rabbanut threatens us with legal action, our response is, ‘Make our day.’”

Hashgacha Pratit’s clientele has slowly grown larger. But the vast majority of restaurants in Jerusalem still look to the rabbinate for kosher certification. Eyal Vaknin, the owner of Fortuna, a kosher meat restaurant around the corner from Topolino, said the teudah is a “guarantee for you and your customers.” Hashgacha Pratit and the restaurants it represents are simply “troublemakers,” he said. “If you go by the rules of the rabbanut you have no problem.”

Up the block, at Cafe Mizrachi, another Hashgacha Pratit restaurant in Mahane Yehuda, the customers seemed unaware that their packed lunch spot had chosen to buck the rabbinate. But Tirza Biron, a teacher in Jerusalem, said she was glad to hear it. “Whatever doesn’t have the rabbanut, I am for it,” she said. “I think Israel should separate religion and state as soon as possible.”

Oded Segal, who was wearing a yarmulke, was also surprised to learn that the restaurant did not have a traditional teudah. “She told me it’s kosher,” he said of the waitress. When he eats at a meat restaurant, he said, he expects the highest kosher standards, higher even than the rabbinate’s.

But since Café Mizrachi is a dairy restaurant, he felt comfortable relying on his own personal kosher certification system — his intuition.

“I see with my own eyes what I’m eating, and it is enough for me.”