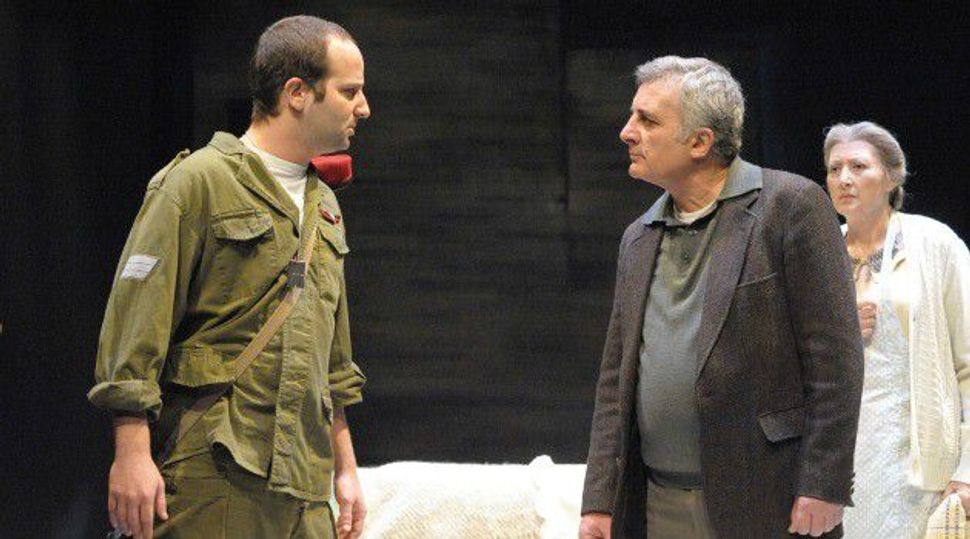 Controversial: One of Theater J’s disputed productions was 2011’s ‘Return to Haifa,’ which critics claimed took an anti-Israel approach. Image by Stan Barouh

UPDATE: This story has been updated to include new information from Theater J.

The Jewish theater company in the nation’s capital is struggling to find its footing in the face of increasing efforts by donors and funders to steer it away from dealing with controversies related to Israel.

Theater J, a nationally acclaimed group under the auspices of the Washington DC Jewish Community Center, is battling a decision by the JCC to cancel its annual Voices From a Changing Middle East Festival. The theatrical festival, which in the past has included works critical of Israeli policy, was asked to accept a rigorous vetting process of artists this year to limit that criticism.

“Increasingly, Theater J is being kept from programming as freely, as fiercely, and expressing itself as fully as it needs,” the artistic director, Ari Roth, wrote to the company’s executive committee in September, in an internal document obtained by the Forward. “We find the culture of open discourse and dissent within our Jewish Community Center to be evaporating.”

Theater J and the DCJCC are not the only institutions caught between donors concerned about negative depictions of Israel and creators arguing for artistic freedom; New York City’s Metropolitan Opera is still reeling from the protests against its decision to produce “The Death of Klinghoffer”; the JCC in Manhattan came under fire in 2011 for partnering with progressive organizations, and in San Francisco, the Jewish film festival was the first, in 2009, to face pressure from donors to change its programming.

“It’s pervasive,” said Elise Bernhardt, former president and CEO of the now-defunct Foundation for Jewish Culture. “At the end of the day, they are shooting themselves in the foot.” Bernhardt said that attempts to censor Jewish art will only deter young members from being involved in the community.

Theater J had entered the planning stage for its 2014–2015 season bruised from the controversy over “The Admission,” a play by Israeli playwright Motti Lerner dealing with the expulsion of Arabs from their village during Israel’s War of Independence. Following an organized campaign of activists who threatened to cut donations to the Jewish Federation of Greater Washington, a funder of the DCJCC, the theater found a workable compromise by scaling back the production while keeping the play on its program.

But this solution did not quell the larger debate. In several meetings this past summer, Roth, the theater’s executive committee and JCC executive director Carole Zawatsky tried to find ways to avoid another showdown. The discussions remained behind closed doors, but reports and documents later obtained by the Forward clearly indicate the sense of distress among theater leaders because of external pressure. Roth warned that recent attempts to intervene in the theater’s choices could put at risk the future of its partnership with the DCJCC.

“The Center wants to stand united with Federation in support of Israel, at war and at peace; aligned with the Government of Israel,” Roth wrote, referring to the JCC. “The theater wants to shine a line on trouble-spots as part of a comprehensive engagement with Israel.”

At issue was the future of the Voices From a Changing Middle East Festival as well as new requirements regarding vetting of artists. The latter issue came up following an incident in April in which the DCJCC canceled a planned performance by a Brooklyn-based group, The Shondes, after finding out that one of the band members supported BDS, a movement that advocates boycotting, divesting from and sanctioning Israel as a means of pressuring the government on its occupation of the West Bank.

Roth, according to knowledgeable members of Washington’s Jewish community, proposed several alternatives meant to distance Theater J from the DCJCC to ensure the former’s artistic independence. One suggestion called for spinning off the controversial festival into a separate organization, not sponsored by the JCC. Eventually, all offers were turned down. Currently, the festival is not included in the theater’s program.

Zawatsky and Roth declined requests from the Forward to interview them. But they provided written statements.

Zawatsky said that her organization has “a strong commitment to presenting programming both about Israel and from Israeli artists, journalists and thought leaders.” The DCJCC, she added, is “proud of the diverse voices we continue to bring to our community year after year,” and noted that over the past few years the center hosted events with Israeli artists aligned with the left, including film director Dror Moreh, singer Achinoam Nini and author David Grossman.

Roth told the Forward in his written statement, “Theater J has not moved to cancel anything. The DCJCC has made an executive decision and informed me and our Theater J Council of such. I’m committed to the future of the Voices From a Changing Middle East Festival and would never move to cancel such an acclaimed, important signature initiative.”

A source close to the DCJCC stressed that while the Voices From a Changing Middle East festival is not on the calendar, it does not necessarily mean that content on these issues is erased from the programming.

This explanation did little to assuage the concerns of at least one board member, who resigned in protest. In a letter sent on November 6, Deborah Carliner, a longtime supporter of the theater, wrote that she was “dismayed by, disappointed in, and disapproving of actions taken by the DCJCC in the last year.” Carliner did not make her resignation public, but when approached by the Forward she said she hoped her move would “generate a discussion” about the limitations put on the theater company by the DCJCC. In her letter, Carliner argued that the decision to cancel the festival was “detrimental to the arts and the DCJCC and a sad commentary” on narrowing the theater’s mission.

“The JCC hasn’t been able to protect Theater J,” said Deborah Kaufman, who has closely followed the issue of artistic freedom in the Jewish world in the film she co-created with Alan Snitow, “Between Two Worlds.” “The JCC doesn’t understand that they have a professional theater that is operating under top-notch standards.”

Bernhardt, on the other hand, sympathized with the JCC, noting that Zawatsky has dealt in the past “in a very smart way” with pressure regarding the theater’s independence. “I can only imagine that there is a threat on her institution that is so grave that she was forced to make a Solomon’s decision,” she said.

Bernhardt encountered similar pressure when she ran the FJC. The decision to fund an Israeli documentary, “The Law in These Parts,” which discussed the legal aspects of Israel’s occupation of the West Bank, led to harsh criticism from some donors and board members. “It caused such a firestorm,” she recalled, saying it took her many months of damage control to deal with the reactions. “People who were otherwise rational just lost their minds.”