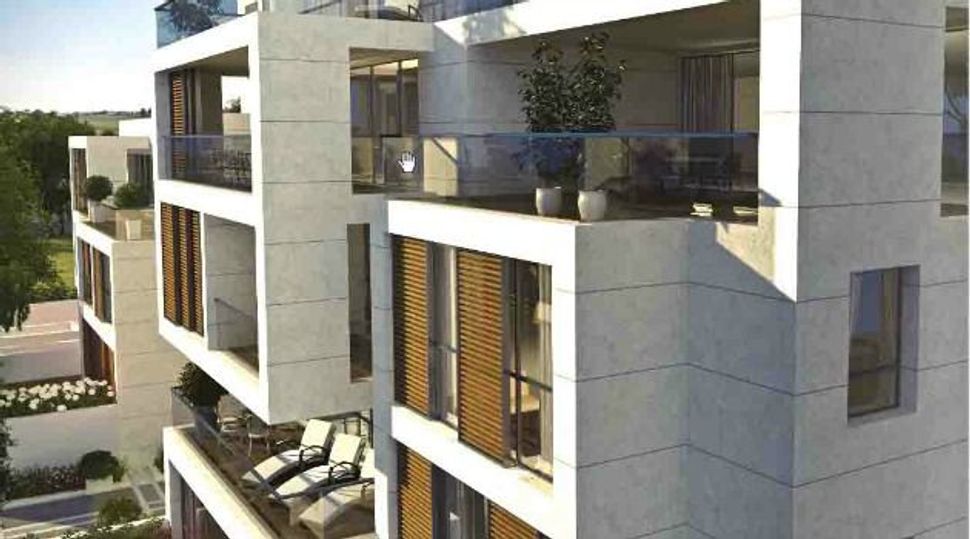 Image by Courtesy of The Hampton Synagogue

That’s the philosophy behind a new luxury apartment project in Israel called The Hamptons in Herzliya Pituach that’s attempting to link two very swanky locales in the service of strengthening Diaspora Jews’ connections to Israel — and selling high-end apartments.

The 34-unit building is the brainchild of Rabbi Marc Schneier of The Hampton Synagogue, an Orthodox congregation on Long Island’s posh East End. The synagogue has one of the most affluent memberships in the country and is also very generous toward Israel: In just two weekends last summer, congregants raised more than $1 million for an Israel emergency campaign and another $535,000 for United Hatzalah, the Israeli emergency rescue service.

But this project aims to get community members to go beyond opening their checkbooks for Israel.

“This is a campaign to challenge Jews in the Diaspora to raise their commitment from giving to Israel to owning a piece of Israel,” Schneier, who used to work in real estate, told JTA. “Owning only strengthens your commitment, it only intensifies your relationship, it only reinforces your dedication and devotion.”

It’s unabashedly Hamptons-style Zionism. Prices start at $1 million, and the two- and three-bedroom units and penthouses feature high-end finishes, swimming pool access and Mediterranean views. The building will also feature a Hampton Synagogue prayer room, complete with replicas of the engraved donor plaques that adorn the Long Island synagogue — so as to “create a presence for these donors and benefactors also in Israel,” Schneier says.

Shelly Levine, the real estate agent in Israel working on the project, says buying a home in Israel is a first step to getting Diaspora Jews to spend more time in the country.

“Once they own, they’ll come,” she said. “This is a project to make people not only give their donation from a distance, but to feel a part of Israel, a part of the land, a part of the people.”

The idea for the project, which is being developed by the Ofer Investments Group, grew out of a conversation between Schneier, Levine and her late husband, PR guru Charley Levine, who died last week at age 62 following an aneurysm suffered over the summer. The Levines immigrated to Israel from the United States in 1978.

Ownership is not limited to members of Schneier’s synagogue. In addition to the Hamptons, the project will be marketed in affluent areas elsewhere in the Diaspora, including Miami and Paris. Schneier says he wants The Hamptons in Herzliya Pituach to become a model for other affluent Diaspora communities.

With Israeli real estate increasingly out of reach for ordinary Israelis, advocates for affordable housing in Israel have complained about absentee foreign owners driving up home prices and spurring developers to focus on the luxury market for overseas buyers at the expense of building affordable units for locals. In Jerusalem, parts of some neighborhoods are largely dark except for holiday periods when their foreign owners are in town. Levine says that phenomenon is not a factor in Herzliya Pituach, where foreign ownership is relatively scarce.

An upscale Tel Aviv suburb on the Mediterranean coast just north of the city, Herzliya Pituach is a natural choice for a “sister city” for the Hamptons. Like the Hamptons, it’s on the beach, expensive — and residency there is a status symbol.

The condo project, part of a larger complex that is to be made up of seven other buildings, is situated a short walk from the beach. Developers estimate that the Hamptons building will be ready for occupancy in about three years. Schneier says the condo project is a crowning achievement of his synagogue’s 25th anniversary next year. Since Schneier founded it in 1990, The Hampton Synagogue has become a place not just to pray, but for the affluent and the influential to see and be seen. Hillary Clinton and Steven Spielberg have stopped by, and its roster of summer speakers has included top Israeli political figures, performers and intellectuals. Last summer’s highlights included Broadway star Harvey Fierstein, author Joseph Telushkin, singer David Broza and Bill Bratton, the New York City police commissioner.

The synagogue is open year-round, but Schneier is only there from May through November; the peak is the summer season. Schneier divides the rest of his time between New York and Palm Beach, Fla., where he is a guest rabbi twice a month, and traveling around the world promoting the Muslim-Jewish reconciliation work he does as part of his Foundation for Ethnic Understanding.

Schneier says he hasn’t decided yet what his presence in Herzliya Pituach will be, but he expects to have a residence there — which he’ll get at a discounted rate because of his role in the project. A promotional video that the project recently released features Schneier standing in front of the Long Island coast and talking about his personal connection to Herzliya Pituach (he summered there in 1989).

“This is not a mass appeal to make aliyah,” Schneier said. “This is really about trying to find a conduit to elevate people’s commitment to Israel.”