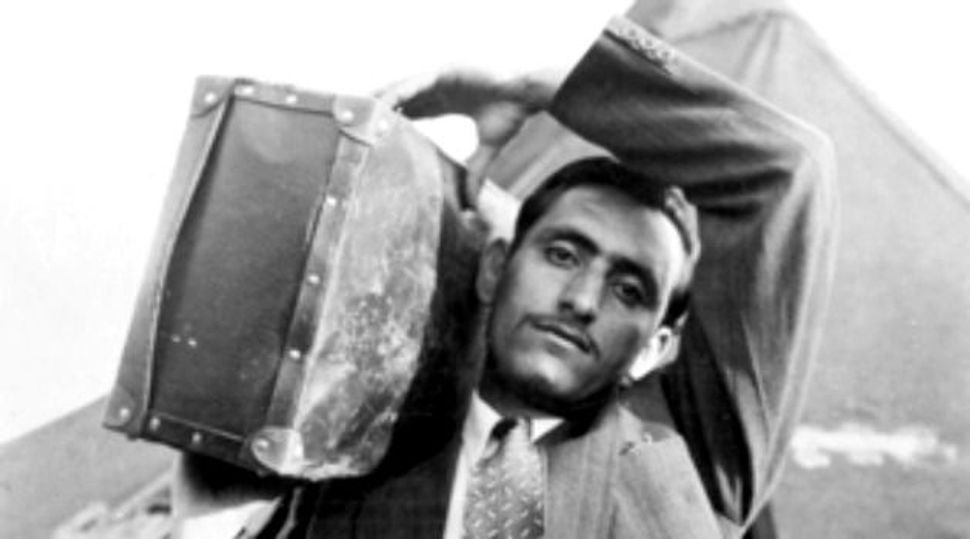 Remember the Refugees: An Iraqi Jew lands in a transit camp in Israel during the 1950s. Image by Courtesy of Justice for Jews from Arab countries

(Haaretz) — For Meir Kahlon, chairman of the World Organization of Jews from Arab Countries, this is a historic week. For the first time, Israel has officially recognized his suffering, that of his family and some 850,000 other Jews who left, were expelled or fled from their homes in Syria, Libya, Morocco, Algeria, Tunisia, Iran, Iraq, Yemen, Egypt, Lebanon and other Arab and Muslim countries around the time of the founding of the State of Israel and afterwards.

“Until now, they spoke about the Arab refugees and not the Jewish refugees. Today we are marking the remembrance day commemorating the expulsion of the Jews of Arab lands,” shouted Kahlon emotionally into the microphone at Bar-Ilan University, where a seminar on the topic was held last Thursday with the title “Exodus, Emigration, Expulsion and Uprooting.”

November 30 is the official day the State of Israel marks for the first time as the national day of commemoration for Jewish refugees from Arab lands and Iran, based on a law sponsored by MK Shimon Ohayon (Yisrael Beiteinu) and passed this summer by the Knesset. The date has a special meaning – it is the day after November 29, the day in 1947 that the United Nations General Assembly approved the partition plan for the Palestine Mandate and the creation of a Jewish state. November 30, the day after the decision, is the day the Arabs started their concerted attacks on the Jews.

“The Arab nations did not accept the UN partition plan, and the riots against the Jews started. We want to remember this day as the Nakba [catastrophe in Arabic, used to refer by Palestinians to Israel’s Independence Day] Day of the Jews of Arab lands,” Kahlon told Haaretz. “It is not just the Nakba of the Palestinians – it is also our Nakba, Jews of Arab lands who were expelled and slaughtered.”

Almost a million Jews lived in Arab and Muslim countries in 1948 when Israel was founded. The largest Jewish community was in Morocco, with 250,000 Jews. Today are only a few tens of thousands of Jews left in all the Arab countries together.

Kahlon was born in 1938 in Tripoli, the capital of Libya. The city had a Jewish population of 40,000 until 1948. His father, Shalom Kahlon, came to Tripoli from Al Khums (also known as Khoms), a town in northwest Libya on the Mediterranean Sea. There Shalom met his wife, Margalit Gita Fadlon. One of his uncles was the head of the Jewish community in Zuwara, on the sea near the Tunisian border. One of his ancestors was the famous rabbi Binyamin Kahlon.

Kahlon’s mother was killed in the Holocaust of Libyan Jews in 1942. “They came to take my father to the labor camps. My mother did not want to open the door. The Germans and the Italian fascists hit the door, my mother fell and died a day later,” he recounted.

Later the family fled Tripoli with the help of bribes and found refuge in Zuwara. “The Jews already did not feel safe in Libya, but continued to live [their lives], build and work. In 1945 133 of them were murdered in the pogroms in Tripoli, in which synagogues were burnt down and hundreds of Jewish businesses were destroyed,” he added.

When he was 8 years old, Kahlon’s older sister taught him the lyrics of the song by Yehoshua Friedman “A dunam here and a dunam there,” on the work of the Jewish National Fund: “I will tell you, little girl, and you, little boy, how it is in the land of Israel. Land is redeemed: A dunam here, and a dunam there, clump by clump – that is how we redeem our people’s land, from north to south. On the wall hangs a box, a blue box. For every cent that goes inside, land is redeemed.”

In 1949, when he was 11 and without his mother, he came to Israel along with his father and younger brother on the ship Komemiyut. In Israel he worked in a wide number of public positions and management roles – until he realized that the country had pushed aside his family history, along with that of many others who came to Israel from Arab countries.

“We were always of secondary importance. In the educational system they never asked me to tell the story of my mother and father. They did not worry about my learning it. It pained me. I was angry when they talked only about the pogroms, the suffering and the Holocaust of European Jewry, and not our Holocaust. True, the number of our Jews who were murdered was smaller than that in Poland – but it cannot be that for the matriculation exams they learned about the Kishinev pogroms and did not mention the pogroms against the Jews of Arab lands. In Libya they took people to the camps too. Libyan Jews also hid and suffered,” said Kahlon.

In the Libyan Jews Heritage Center in Or Yehuda, the forgotten history is documented. In the memorial room are the names of Libyan Jews who were murdered, including the grandfather of businessman Yitzhak Tshuva, Rabbi Yosef Tshuva, who was stabbed to death in 1948 in his synagogue in Tripoli.

The organization Justice for Jews from Arab Countries joined Kahlon, who has also been the chairman of the Union for Libyan Immigrants since 1992, and other immigrant groups in their struggle for recognition. The goal was to raise awareness of the issue, in order to ensure that in any future peace negotiations not only the Palestinian refugees would receive compensation, but also the Jewish refugees from Arab countries who were uprooted from their homes.

“Every time the world talks about refugees from the Middle East [they] only emphasize the Palestinian refugees. The fact is there were two populations of refugees,” says Dr. Stanley Urman. Urman, a founder of JJAC, its current executive vice president and former executive director, lives in Montreal. The organization’s goal is make sure that the narrative of the suffering and rights of the Jews from Arab lands are also on the negotiating table, since they were also refugees as part of the same struggle, at the same time and in similar numbers, he says.

In recent years, Urman has been researching the UN’s activities concerning the refugees, and points out the lack of equality in the UN’s treatment of Palestinian and Jewish refugees. He counted 197 UN General Assembly and Security Council decisions between 1946 and 2014 concerning Palestinian refugees. Yet there is not a single UN resolution that emphasizes the suffering and rights of the Jews from Arab lands, he points out.

The exception is the famous Security Council Resolution 242 passed in November 1967 after the Six-Day War. “Achieving a just settlement of the refugee problem,” states section 2(b) of the resolution, without providing any details of which refugees it is talking about. Representatives of Britain and the United States said afterwards that they used this wording intentionally so as to also recognize the rights of the Jewish refugees, says Urman.

If the suffering of the Jews from Arab countries is not part of any future peace agreement, it will be the State of Israel’s final betrayal of Middle Eastern Jewry and the end of their hopes, he warns.

Prime Minister Benjamin Netanyahu said in a statement: “We mark today for the first time the exodus and expulsion of hundreds of thousands of Jews from Arab countries and from Iran in the first years after the state of Israel was founded. It is not for nothing that this day is marked the day after November 29th – [when] the Arab countries that did not agree with the United Nations resolution establishing the Jewish state forced the Jews in their territory to leave their homes, leaving behind them their property. In some cases, the expulsion was carried out alongside pogroms and violence against Jews. We acted, and we’ll continue to act, so that they and their demands will not be forgotten.”