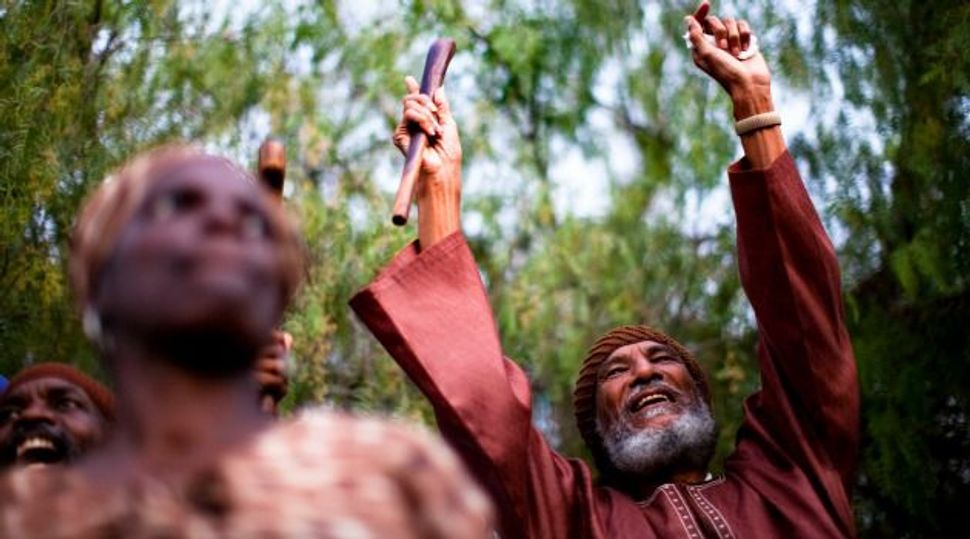 When 77-year-old Rabbi Richard Nolan recalls Ben Ammi ben Israel, the leader of the Hebrew Israelite community in Israel who died last weekend, their shared hometown of Chicago is wrapped up in that recollection.

And the image is bleak.

“There was degradation, segregation, discrimination, lack of education and opportunity,” Nolan said. “A people who had been lynched and raped, been through the black Holocaust.”

Nolan is one of a handful of Chicago spiritual leaders who emerged in the ’50s and ’60s to declare African Americans as heirs to a more uplifting past: Blacks brought to America, he said, were descended from the biblical Israelites and had a sacred, ancestral covenant with God. Drawing from older teachers and peers, Nolan and others described American blacks as a people severed from their traditions by hundreds of years of slavery who should return to the Almighty.

Ben Ammi ben Israel, who passed away in Israel on Saturday at the age of 75, emerged out of this era and would go on to found the African Hebrew Israelite community in Dimona. In his passing, he leaves behind thousands in that community, which he established in 1969. In his hometown of Chicago, he leaves behind contemporaries who recall him with a mixture of respect and admiration, but also awareness of how their religious and ideological paths diverged — in particular regarding their interaction with mainstream Jewry and when and how to emigrate to Israel.

Nolan met Ben Ammi, born Ben Carter, in the 1960s at Hebrew classes in Chicago. They were studying with another Hebrew Israelite rabbi named Abihu Reuben, who gave Ben Ammi his Hebrew name.

“There were Hebrew classes everywhere, we held them on the south side, on the west side, classes over here, classes over there, in temples, in homes, they spread like wildfire,” recalled Nolan, who now leads the Universal Kingdom of Yah House of Israel in Harvey, Illinois.

Israelite communities had blossomed in Chicago over the previous decades. They drew ideology, at least in part, from the teachings of Rabbi Wentworth A. Matthew, founder of Harlem’s Commandment Keepers Ethiopian Hebrew Congregation in New York, a hugely influential synagogue that around 1920 also taught that black Americans were Israelites. Reuben had studied with Matthew and had been ordained through his rabbinical college in New York.

All the Israelites shared some central tenets, but factions emerged, specifically over questions of repatriating to Africa, a prospect that had appealed to black nationalists in earlier decades, including the early Commandment Keepers. Ben Ammi rose quickly to prominence as a charismatic orator, advocating for immediate black repatriation to an ancestral homeland.

But Nolan and others believed the time wasn’t right for a massive emigration. Among Ben Ammi’s prominent opponents were Rabbi James Hodges, founder of Chicago’s Temple of Ysrael Kingdom Center, who is today 87, and Rabbi Robert Devine, the founder of the House of Israel Hebrew Culture Center, who is now 88. Along with Reuben, they were then reaching out to the larger Jewish world, hoping, perhaps, that they could carve out a better life for their communities in America.

“I heard that he wants to go back to the land,” Devine remembered, referring to Ben Ammi. “I didn’t agree with his philosophy. I thought it wasn’t time; everything happens in its time.”

Initially Ben Ammi and those favoring emigration proposed Liberia as a possible national home. In 1967, Ben Ammi and other peers gathered about 300 followers and left for that country.

Four months after Ben Ammi’s departure, Hodges, Nolan and Devine founded the United Leaders Council of Hebrew Israelites, with a declared goal of “unit[ing] as many Hebrew organizations as possible in a confederation.” Under Devine’s leadership, the council worked with the Chicago board of rabbis and with the Fellowship of Multi-Racial Jews.

“Everybody had his own ideal,” Hodges said, describing where he and Ben Ammi differed. “Some brothers were more profound with nationality than they were with religion. Some didn’t cater to what we were doing. Some of the brothers didn’t want to deal with the Jewish community at all. We were saying, ‘What’s the problem with the Jews?’”

Hodges, Nolan and Devine didn’t rule out emigration. But they also sought broader recognition of their spiritual communities in the mainstream Jewish world.

Meanwhile Ben Ammi’s community, after two difficult years in Liberia, began the process of relocating to Israel after receiving what they described as divine messages instructing them to move to the Holy Land.

Re-establishing his community in Israel was far from straightforward. Hebrew Israelites were detained at Ben Gurion International Airport after their intentions of permanent relocation were revealed. They were housed in Dimona, a city in the desert, far removed from the country’s population centers, while the minister of absorption deliberated along with rabbinical authorities over the community’s Jewishness. (It was suggested that the group convert, and initially a few members began the process, but Ben Ammi forbade this).

The group members, then calling themselves the Original Hebrew Israelite Nation of Jerusalem, overstayed their tourist visas. They could not work legally, but Israelites from the United States still trickled in. When threatened with deportation, Ben Ammi denounced Israel as a “racist Jim Crow country” for not recognizing the Israelites’ immigration as valid under Israel’s Law of Return. Israelites staged sit-ins and demonstrations during which they destroyed their American passports.

Ben Ammi actively recruited from the Israelite community in Chicago, Hodges recalled, along with other cities, such as Philadelphia, New York and Atlanta.

“He set himself up as somewhat of a messiah,” Hodges said, referring to one of the titles Ben Ammi used in the Dimona community.

Despite their differences, Rabbi Capers Funnye, who studied under Devine and now leads Chicago’s Beth Shalom B’nai Zaken Ethiopian Hebrew Congregation, is mourning Ben Ammi’s death. “Condolences go out to his community,” said Funnye, whose congregation is today Chicago’s most well-known Hebrew Israelite synagogue. “We pray that that the Eternal comforts them.”

Some congregants of Funnye’s synagogue used to live in Dimona. But Funnye stresses the difference between Ben Ammi’s practice and his synagogue’s, which is associated with New York’s Commandment Keepers community and the Israelite Board of Rabbis, in Queens.

“There was a divergence,” he said. “The ideology Ben Ammi introduced to the community was very far afield from the traditions of Judaism that I was taught and that I teach.” He noted Ben Ammi’s claim to have received divine messages directly from an angel. The Dimona community also practices strict veganism; polygamy is also permitted.

The coalition of non-emigrationist Hebrew Israelites headed by Devine disbanded in the 1970s. Nolan and Hodges still live in Illinois. Devine now resides in Mississippi. Each leads his respective community these days, deeply observant but largely off the radar of the bigger Jewish community, and with little connection to the State of Israel.

Ben Ammi, who continued to build up his community in Israel, went on to become an international figure. Funnye formally converted to Conservative Judaism and now sits on Chicago’s board of rabbis, perhaps a testament to his predecessors’ faith in the eventual fruits of cooperating with wider Jewry.

In Israel, Ben Ammi also softened his separatist tone in later years, especially after Israel allowed his community to settle in the country permanently and legally. These days, the Hebrew Israelites are more integrated with Israeli society.

Nolan never visited Dimona but admits that what Ben Ammi did was historic.

“There was something electric about him. You could tell why everyone followed him,” said John L. Jackson, the author of “Thin Description,” a study of the Dimona community. “Even as an ethnographer I could see this. You could see the power he had to convince people to sell all of their belongings, to do something that might seem preposterous.”