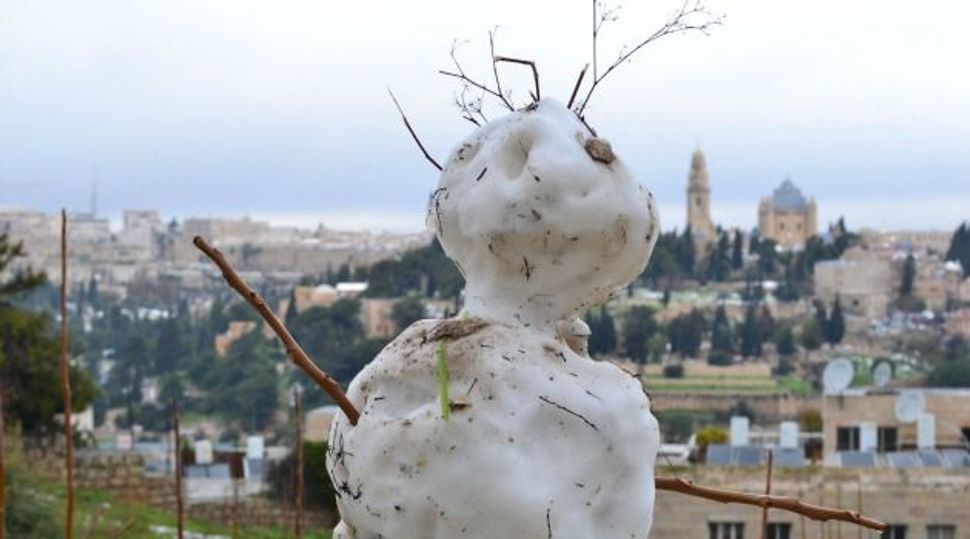 A rare winter storm eased away from Israel on Thursday, leaving behind a coating of the white stuff around Jerusalem and power outages, but little serious damage.

As the snow turned to icy rain, cold-phobic Israelis ventured out Thursday after many cowered inside the day before.

One man who works at a convenience store off of Hebron Road in Jerusalem pooh-poohed the panic over the white stuff.

The man, who didn’t want to give his name, conceded he’s not a big fan of the chilly season in the Holy Land: “I’m more of a summer person.”

A day earlier, Ron Kaskash had a very different take on the icy rain that was falling outside of Holy Land Souvenirs, the shop where he sells Judaica and olive wood trinkets in Jerusalem’s Old City.

Israel’s first snow storm of the year blew in Tuesday night with heavy wind, ripping branches off trees and tearing mezuzahs, or Jewish prayer scrolls, off door frames. (At least that’s what happened to the mezuzah on this reporter’s door.) By late Wednesday the storm had accelerated into rain, hail and finally a wintry blizzard, coating Jerusalem’s iconic stone buildings with a thin layer of white. All roads to Jerusalem were closed as of Wednesday afternoon.

Across Israel and the Palestinian Territories, people prepared for the weather. In Gaza, municipal officials warned against the catastrophic effects of the storm with more than 100,000 people left homeless after Israel’s Operation Protective Edge.

At Kibbutz El-Ron in the Golan Heights, nearly two feet of snow had accumulated by early evening. David Herman, a senior member of the kibbutz, said that he was concerned about the fruit trees, which were bending under the heavy wet snow. “We do have water and electricity and that is a great thing so far,” he said.

Outside of Old City’s Jaffa Gate in Jerusalem, where a pile of salt bags sat at the ready, a group of Orthodox Jewish teens made snowballs from the slush and threw them at cars below. Orthodox men walked with their Borselino hats covered in plastic bags. And Israeli policemen — who usually make up a heavy presence in the tense Old City — wore full body snowsuits with fur trim.

Bundled in a long black coat that was quickly accumulating white flakes, Leo Cohen said he came to Jerusalem from Be’er Sheva to pray at the Western Wall, but that because of the weather he would be spending the night at a Jerusalem yeshiva. “It’s good,” he said of the snow. “It’s beautiful.”

Kaskash said that he had also changed his plans because of the snow, and would be sleeping in his store instead of returning home to the Mount of Olives area. As tourists sped by looking for shelter, Kakash shouted at them in English, Hebrew and Italian to come inside or purchase an umbrella. His was one of the only shops open. The snow, he said, was “good business.” “You see, there’s only me here.” 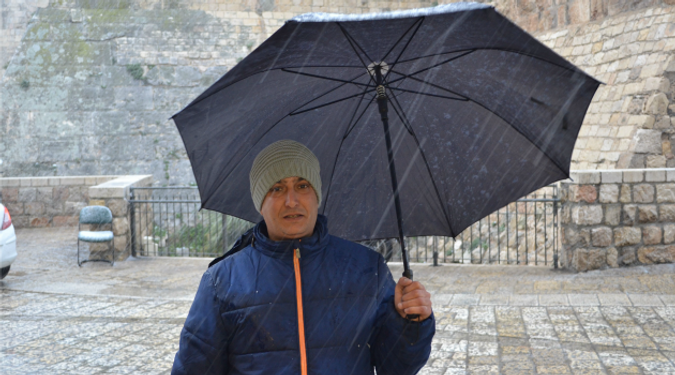 Rami Samara, a half Jewish, half Palestinian Christian tour guide from Jerusalem’s Old City said that he continued giving tours today in spite of the weather. Several other tour guides he knew had cancelled.

He agreed with Kaskash: “It’s nice, it’s from God. You know in this land, we don’t have snow,” he said. “Only one or two days maximum.”

Wind and rain struck the Gaza Strip, where infrastructure and thousands of homes were destroyed in a 50-day war with Israel last summer.

“Even nature is angry. I hope God is not angry with us … I am frightened for the fate of those without shelters, whose houses Israel destroyed,” said Gaza City resident Abu Ahmed, heading to buy fuel for a fire.