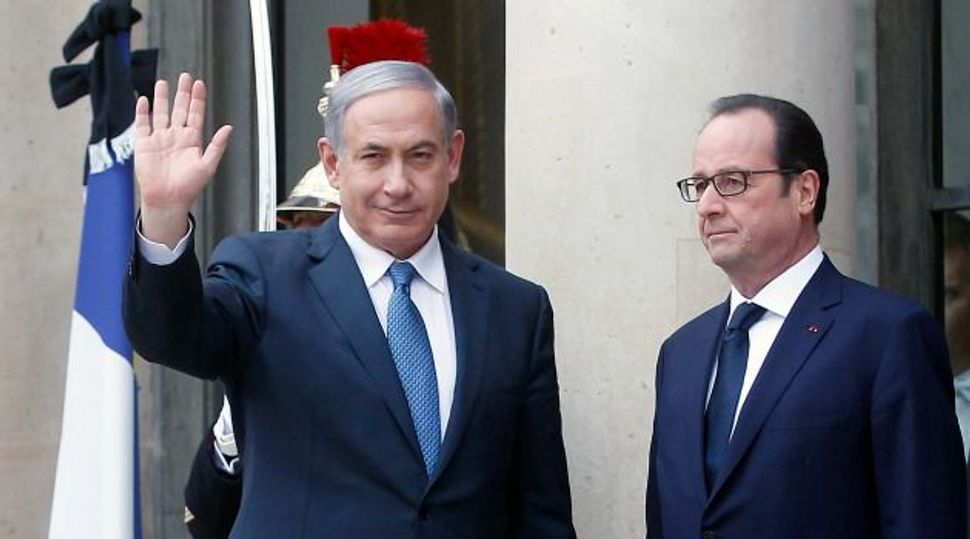 Chilly Meeting: French President Francois Hollande makes little effort to cover up his displeasure at the decision of Benjamin Netanyahu to attend the anti-terror march in Paris. Image by getty images

French President Francois Hollande asked Prime Minister Benjamin Netanyahu not to come to Paris for the march against terror on Sunday, but the Israel premier decided to attend anyway after hearing that political rivals were going to be there, according to an Israeli source who was involved in the contacts between the Elysees Palace and the Prime Minister’s Office in Jerusalem. The fact that this message had been conveyed was first reported by Channel 2.

After the French government began to send invitations to world leaders to participate in the rally against terror, Hollande’s national security adviser, Jacques Audibert, contacted his Israeli counterpart, Yossi Cohen, and said that Hollande would prefer that Netanyahu not attend, the source said.

Audibert explained that Hollande wanted the event to focus on demonstrating solidarity with France, and to avoid anything liable to divert attention to other controversial issues, like Jewish-Muslim relations or the Israeli-Palestinian conflict. Audibert said that Hollande hoped that Netanyahu would understand the difficulties his arrival might pose and would announce that he would not be attending.

The source noted that one of the French concerns – not conveyed to representatives of the Israeli government – was that Netanyahu would take advantage of the event for campaign purposes and make speeches, especially about the Jews of France. Such statements, the Elysee Palace feared, would hurt the demonstration of solidarity the French government was trying to promote as part of dealing with the terror attacks. 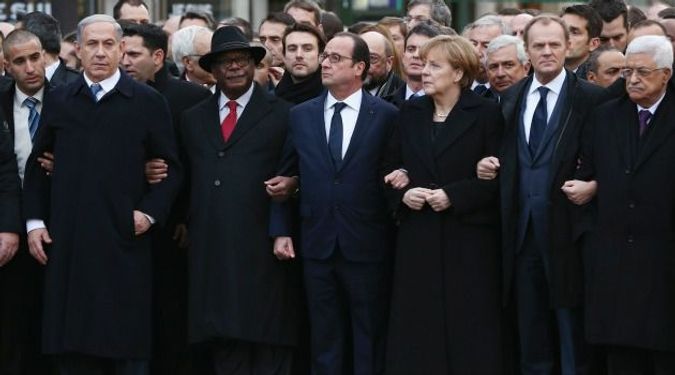 According to the source, Netanyahu at first acquiesced to the French request. In any case, the Shin Bet security service unit that protects public figures considered the arrangements for the prime minister’s security to be complex. And so, on Saturday evening, Netanyahu’s people announced that he would not be flying to Paris because of security concerns. Netanyahu told the French he would come to France on Tuesday for a Jewish community event.

The French apparently sent the same message to Palestinian Authority President Mahmoud Abbas. Like Netanyahu, Abbas acceded to the French request and released a strange statement about the same time Netanyahu released his, that he would not be attending the event because of the bad weather.

However, on Saturday night, Foreign Minister Avigdor Lieberman and Economy Minister Naftali Bennett announced their intention to go to Paris and take part in the march and meet with the Jewish community. When Netanyahu heard they were going, he informed the French he would be attending the march after all.

According to the source, when Cohen informed Audibert that Netanyahu would be attending the event after all, Audibert angrily told Cohen that the prime minister’s conduct would have an adverse effect on ties between the two countries as long as Hollande was president of France and Netanyahu was prime minister of Israel.

Audibert made it clear that in light of Netanyahu’s intention to arrive, an invitation would also be extended to Abbas. And indeed, several hours after Abbas announced that he would not be traveling to Paris, his office issued a statement stating that he would in fact be at the march.

Hollande’s anger at Netanyahu was evident during the ceremony held Sunday evening following the march at the Grand Synagogue in Paris, an event attended by hundreds of members of the local Jewish community.

Hollande sat through most of the ceremony, but when Netanyahu’s turn at the podium arrived, the French president got up from his seat and made an early exit.

Upset at Netanyahu, Hollande also presumably preferred to avoid a rerun of the 2012 ceremony for the victims of the Toulouse shooting – to which Netanyahu arrived just as he was commencing his elections campaign.

The French weekly La Canard Enchaine revealed then that Hollande complained in closed talks after that event that he found it unfortunate that Netanyahu had come to Paris to conduct a “two-staged election campaign,” starting with a memorial for those murdered at the Jewish school in Tolouse, followed by a his speech at a ceremony there. The French president was quoted by the report saying that it was only because he came with Netanyahu to the ceremony that the Israeli prime minister toned down his speech.

Sources in the Prime Minister’s Bureau said Sunday that when contacts were first made with the French over Netanyahu’s trip this week, they were told that the visit could “cause difficulties.” According to the sources, the Israelis understood that the French were referring mainly to security issues. They added that after the security arrangements were made, Hollande told Netanyahu in a phone call on Saturday evening that he would be happy to see him.

Associates of Netanyahu said that at no point did the French tie Netanyahu’s visit in with that of Abbas.