Who Are Israel’s French Immigrants — and Why Did They Come? 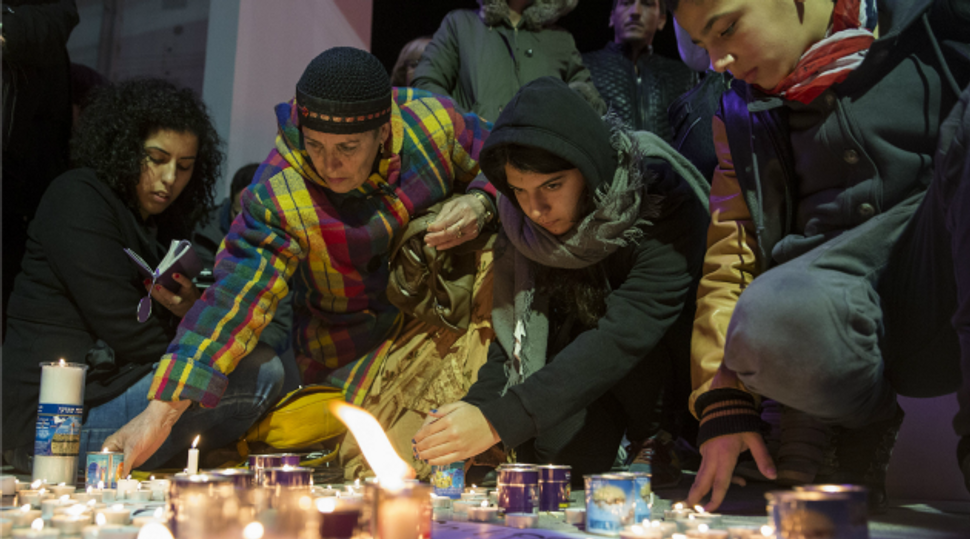 Growing Community: French Israelis light candles in the coastal city of Netanya to mourn the victims of the Paris terror attacks. Image by getty images

As French Jews in Israel watched the overwhelming show of solidarity against terrorism by French citizens following the recent attacks in Paris, many spoke of feeling alienated rather than comforted by the outpouring.

France, they say, would never have staged the huge demonstration it did on January 11 had the attacks targeted Jews alone.

“The demonstration in Paris was heartwarming, but I’m pretty sure that if what happened in Charlie Hebdo didn’t happen and just the Hyper Casher event had occurred, the reaction wouldn’t have been the same at all,” Hanna Harboun, a 24-year-old Parisian living in Israel wrote in an email to the Forward. “Don’t get me wrong, there are people who are non-Jewish and understand what is going on for us in France, but it’s a tiny minority.”

Harboun, who is in Israel on a post-college program sponsored by the Israeli government, started weighing the question of aliyah, or immigration, over the summer after three yeshiva boys were kidnapped and killed in the Israeli-occupied West Bank in the lead up to Israel’s war with Gaza. “In France, all you could see on the news was how the French soccer team made it to the next round of the World Cup,” she said. “I felt deeply ashamed and didn’t feel like living in a country where a part of my identity didn’t matter to anyone, where the pain of those families mattered to no one.”

In April she will become an Israeli citizen, joining three grandparents and several aunts and cousins. Her parents will be joining in a few months time.

Soon after the deadly terrorist attacks by Muslim extremists on the satirical weekly Charlie Hebdo and a kosher grocery store in Paris, Israeli Prime Minister Benjamin Netanyahu sparked controversy when he called on French Jews to move to Israel. Natan Sharansky, chairman of the Jewish Agency for Israel, called it “a mistake and not smart” to say to French Jews “Immigrate now,” adding that this was also “insulting” to the French. “I really believe that anti-Semitism is not our ally, and we do not have to act as if it is,” Sharansky said. “We need to say that if they want to be an active part of Jewish history, there is no better place than Israel.”

But even before Netanyahu’s call, thousands reached this conclusion on their own.

French olim made up the largest portion of the 26,500 new immigrants to Israel last year, according to the Jewish Agency. In 2014, 7,000 French Jews — or more than 1% of France’s Jewish population of about 500,000 — moved to Israel, double the number that did so the previous year. Israel’s population of some 95,000 immigrants from France is hardly monolithic; the community comprises Ashkenazi, Sephardic, Orthodox and secular Jews.

According to Avi Zana, director general of AMI, an Israel-based group facilitating French immigration, about a third of French olim are families, another third are retired people and the final third are young single people who move to Israel after high school or university. Some elite families maintain strong professional ties to France, with one parent working abroad during the week and then returning to Israel for the Sabbath. These frequent flyer families are sometimes called the “Boeing olim.”

The core of the French Israeli community is made up of traditionally religious Sephardim who trace their roots to North Africa. When Morocco, Algiers, Tunisia and other North African states gained their independence in the 1950s and 60s, Jews in these countries immigrated to France and developed a Jewish infrastructure there with schools and kosher shops. Recent acts of anti-Semitism committed by self-declared Muslim jihadists in France — from the 2012 murder of three children and a rabbi at a Toulouse Jewish school to the attack on the kosher market — have targeted these identifiably Jewish institutions and their patrons, leading to a feeling of vulnerability among religiously traditional Jews in particular. French Jews in Israel also speak about the 2006 kidnapping of Ilan Halimi, who died from torture-inflicted wounds by a group that called itself the Gang of Barbarians.

Harboun’s lament about French apathy to Jewish killings notwithstanding, these episodes did not pass without a response by French citizens and their government, albeit nothing as enormous as now. After Halimi’s torture and murder between 33,000 (as estimated by police) and up to 200,000 (as estimated by the organizers) people marched in Paris. Thousands of others marched in protests against the atrocity around the country. Participants included leaders of all the major parties and Christian, Jewish and Muslim religious leaders. The killings in Toulouse, which also included the murder of several French Muslim soldiers, generated protest marches by several thousand in Paris and several other cities in which marchers held up signs reading, “We will never forget.”

But French Jews also recall the 1980 bombing of the French Israeli Liberal Union synagogue that killed four — the first attack of its kind since World War II — and Prime Minister Raymond Barre’s famous gaffe after the incident, in which he distinguished Jews from “innocent French people” killed in the incident. That episode led French Jews to feel that they weren’t on equal footing with their fellow citizens. Among French Jews in Israel that feeling that has been reawakened today.

Zana described the “push and pull” effect of anti-Semitism and Zionism that brings French Jews to Israel. “The people in the core of the community want to go with a kippah, to speak freely about Israel and to wear a Magen David on their necks,” he said. “But if you want to come to Israel it is not enough to have the phenomenon of ‘push.’ You have to feel something special for Israel.”

A relatively new phenomenon is the arrival of thousands of young, secular but kosher-keeping French Jews in their 20s and 30s. Though many of these Jews identify strongly with Israel, they were lured in part by Israel’s startup economy. “We used to say, to become a millionaire in Israel you have to arrive as a billionaire,” said Yonathan Aflalo, a 29-year-old who completed a doctorate in computer science at the Technion, the Israeli Institute of Technology in Haifa, and then decided to stay. “And now Israel has a strong economy.”

These young French olim — many of whom arrive without partners or children — typically settle in Tel Aviv’s Bograshov district, named for a major thoroughfare that cuts from the city center to the ocean. Their arrival has marked Tel Aviv as the second most popular place for French immigrants after Netanya, a coastal city in the North.

Tel Aviv’s French community has left its mark on the culinary life of the city. French immigrants used to bemoan the lack of good bread in Israel; now baguettes and croissants are easy to come by. In some coffee shops, like Adraba on Ben Yehuda Street, French is more common than Hebrew. “When you go there, you are in France,” said Elodie Guenoun, who runs a French-language events web site called My Little Tel Aviv.

Originally from Toulouse, Guenoun moved to Israel by way of Paris after the 2013 Jewish school attack in her hometown. “I was really afraid for my future in France,” she said. “I don’t have children; it was a good moment.”

But relocating from France to Israel isn’t always a seamless experience. Israel doesn’t recognize certain higher degrees earned abroad. The issue of safety also does not vanish. Israel is no safe haven from terror — or wars. Four French Jews were killed in Operation Protective Edge, the Israeli military campaign against Hamas last summer in Gaza.

Many French olim said that even though Israel might be less secure than France, knowing that they are a priority of the Israeli authorities gives them peace of mind. “I feel less threatened in Israel because at least here I have a government that cares about me,” Aflalo said. “There is an army that will try to do everything possible to protect me. In France we don’t feel that.”

Sarah Silverberg, a 33-year-old marketing coordinator who moved to Israel from Paris in 1996 with her family, looked at things a bit differently. At the time of her family’s move, Silverberg said, her father, the CEO of a large Italian computer company, was facing anti-Semitic comments at work. Given her family’s Holocaust history, her father didn’t want to take any chances and moved the family to Jerusalem. After spending her early teens in Paris living the “material life,” Silverberg hated Jerusalem’s austerity. Then the second intifada started, and things seemed worse. “My parents took me away from safe Paris to Israel where there was bombing everywhere,” she said. “I was blaming them a lot.”

Silverberg now believes that Jews should leave France — and in fact all of Europe — but should consider moving to the United States or Canada where there are more economic opportunities, in addition to Israel. “I don’t believe in the honesty of the world and the people in France protesting together with ‘I am Charlie,’ ‘I am Jewish,’ ‘I am a policeman.’ It is words. Words will never save you against guns. For me, it is a joke.”

Still, for all their alienation, some olim continue to feel that France remains a part of them. “I still love France,” said Carole, a 34-year-old in Tel Aviv who asked to omit her last name because she hasn’t yet gone public with her recent move to Israel. “But I think that France doesn’t love me.”

Who Are Israel’s French Immigrants — and Why Did They Come?