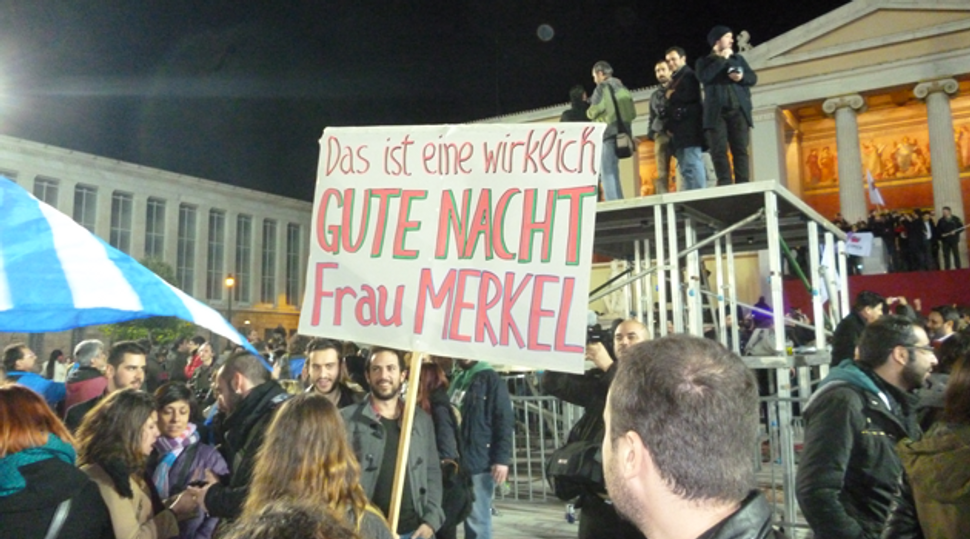 Good Night Merkel: Voters in Greece celebrate election results with a jibe at the German chancellor who they felt was responsible for the austerity measures they have just vetoed. Image by Richard Schwartz 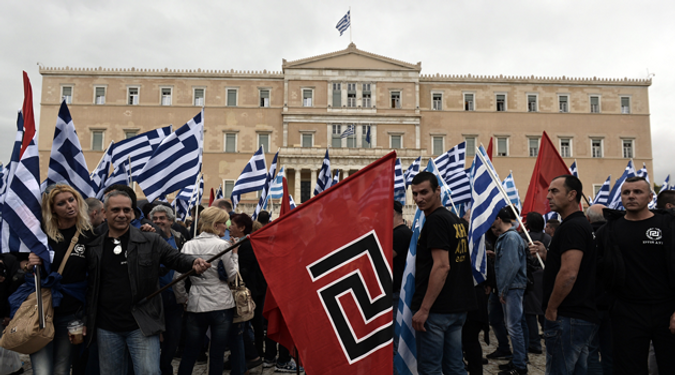 Down with Dawn: Supporters of the right-wing Golden Dawn party rally outside Greek parliament in June 2014. Image by Louisa Gouliamaki/AFP/Getty Images

If Greek Jews are calmly greeting the election of a hard left party strongly critical of Israel, one reason may be that they have been hit no less hard than other Greeks by the country’s current economic devastation, which the election victors vow to reverse.

At the Jewish Museum of Greece, in Athens, a relaxed security guard opens the door the day after the general election in which Syriza, an anti-austerity party, won its thumping victory. In a side room, an on-duty police officer is listening to developments on the radio. Asked if she is optimistic about the result, the receptionist says, “Of course. We have to be optimistic. There is no other way.”

According to the Greek Jewish blogger Abravanel (an online pseudonym), five years of austerity have led to Greece shedding 25% of its gross domestic product. Under the austerity, imposed by the European Commission, the European Central Bank and the International Monetary Fund, unemployment soared to 28%, generating “suffering, immense social hardships and a huge brain drain of its youngest and brightest,” Abravanel wrote me in an email.

The international groups imposed this budget austerity in exchange for loans so that Greece could service its debt, much of it to German banks, after years of government spending far beyond its tax revenues. Even Abravanel acknowledged the decades of poor governance and economic squandering. But the remedy, he said, has been “horribly managed” by the European Union. The program’s results have fallen far short of expectations and have, he says, been driven mainly by concern for “the well-being of private banks and German petty election politics.”

But there is one other reason that Jews have, by and large, been at least quiet about Syriza’s triumph. Moises Constantinis, president of the Central Board of Jewish Communities in Greece, is clearly rattled by the enduring popularity of Golden Dawn, a far-right party that he describes as “Hitlerite.” Speaking after the election, Constantinis officially welcomed the result, congratulating Syriza and promising to continue supporting “national struggles.”

The inaptly named Golden Dawn garnered 6.28% of the vote, entitling it to 17 of the new parliament’s 300 seats, undiminished from its presence in the previous legislature. That might not seem like much. But the openly neo-Nazi party surpassed what were, until recently, popular and crucial mainstream factions, such as To Potami, a centre-left party, and PASOK, the longtime socialist party that was one of the two main pillars of the previous government.

“Greek Jewry is shocked by the fact that a pro-Nazi party is the third political power in Greece, the country that gave birth to democracy,” Constantinis said. Golden Dawn “continues to misguide part of the Greek people by exploiting poverty and suffering,” he added. 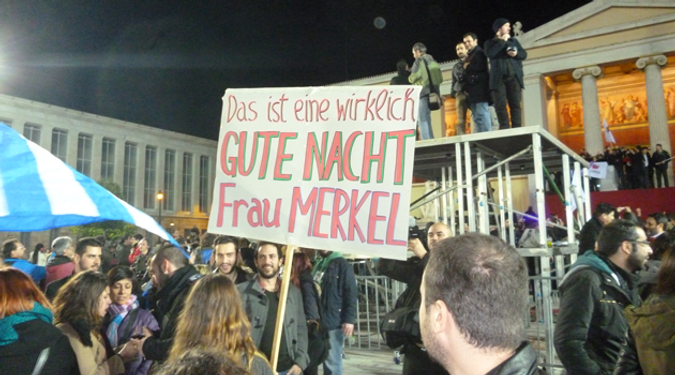 Good Night Merkel: Voters in Greece celebrate election results with a jibe at the German chancellor who they felt was responsible for the austerity measures they have just vetoed. Image by Richard Schwartz

Disturbingly, Syriza, which won 37% of the vote and fell two seats short of achieving an absolute parliamentary majority on its own, has chosen as its coalition partner the second most right-wing party in the election: Independent Greeks. Known under the acronym ANEL and led by the politically promiscuous Panos Kammenos, ANEL would probably be seen as the equivalent of other far-right populist parties in Europe, were it not for the fact that Golden Dawn is even more extreme. In January, Kammenos, a former Cabinet minister, declared in a much-ridiculed TV interview that Jews in Greece do not pay taxes.

Such anti-Semitic stereotyping can pop up unchallenged from time to time in mainstream public discourse. But the notion that Greece is deeply anti-Semitic is a little misleading, one Jewish museum official told me. “With all the troubles and economic despair,” she explained, “Jews are very low on the radar of most Greeks, Golden Dawn notwithstanding.”

The impact of the Holocaust on Greece was particularly severe. Eighty-six percent of the country’s pre-World War II Jewish population of more than 77,000 was exterminated. At the end of the war, only some 10,000 were left. Greece’s Jewish population today is estimated to be roughly half that number, with the majority in Athens and Thessaloniki, and functioning communities in half a dozen other towns.

Greek Jews, whose presence in the country dates to antiquity, consider themselves fully integrated into Greek society. The community has a strong Sephardic component, its members having arrived at the invitation of the Ottoman Empire that ruled Greece when Spain expelled its Jews in the 15th century. Although the community’s profile is low, the first kosher restaurant in Athens since World War II, Gostijo, with a mainly Sephardic menu, has received glowing reviews from mainstream media. (Rigorous research by this reporter confirms that it is worth a visit.)

Constantinis believes that the idea of emigration does not appeal to those Jews who remain, apart from the general brain drain of young talent as a result of the economic crisis. “There is nothing stopping Jewish involvement with the vast majority of political parties in Greece, and we have excellent relationships with the two main parties, Nea Demokratia and Syriza,” he said.

While there were no mainstream Jewish parliamentary candidates in the just completed election, Jewish political involvement is evident at the municipal level. The community’s most prominent office-holder is Hasdai Capon, deputy mayor of Greece’s second city, Thessaloniki.

The impact of the election result on Greece’s relations with Israel remains to be seen. Some cooling off is likely. Syriza supports a two-state solution to resolve Israel’s conflict with the Palestinians and the occupation of the West Bank — albeit, unlike Israel, one based on the country’s 1967 borders. The party also denounced Israel’s conduct during last summer’s Gaza war, decrying the large death toll of Palestinian civilians. Overall, it has a declared distaste for what has been a growing rapprochement between the Greek and Israeli governments.

This rapprochement has developed significantly over the past few years as Israel’s relations with Turkey, Greece’s prime geopolitical rival, have deteriorated. Just last October, the two governments signed 10 agreements for cooperation in various areas at a meeting of senior officials in Jerusalem.

A state visit by Israeli President Shimon Peres in 2012 included a meeting with Syriza’s leader, Alexis Tsipras, who will now serve as prime minister. The Greek-Israel friendship group in the last parliament, moreover, was not devoid of Syriza members. But Syriza’s overwhelming support for Palestinian political aspirations will not make relations easy. In addition, with Kammenos as defense minister, the next political meeting of a 2012 bilateral defense pact could well be awkward.

Nevertheless, the Israeli government quickly congratulated Syriza on its victory. Tammy Ben-Haim, deputy head of mission at the Israeli Embassy in Athens, said Israel looked forward to “continuing cooperation between two countries that have much in common.”

As for the Greek Jewish community, blogger Abravanel took a rather cynical view. “The Tsipras government is a good thing if you’re a dead Jew,” he said, referring to the victims of the Nazis. “Your memory is cherished, and you will probably enjoy more respect and greater recognition. If you’re an alive Jew, things will probably stay the same.”