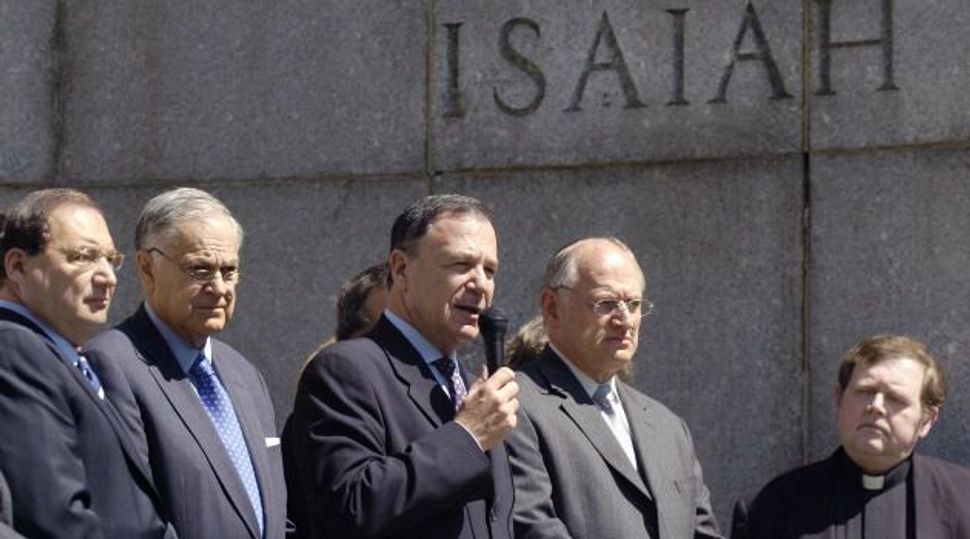 Representing the Establishment: The ADL’s Abe Foxman (left) and other JEwish leaders listen to Dan Gillerman, Israel’s former ambassador to the U.N., speaking about genocide in Sudan. Image by Getty Images

For advocates of Israel, a couple of weeks in March have managed to rattle a message built into America’s DNA through decades of hard work.

In the new reality created by Israel’s March 17 election and the events surrounding it, Israel’s commitment to peace and to pluralism is being questioned by key audiences whose full support was never in doubt before. And this is forcing backers of Israel to re-examine how they now pitch their message to politicians, decision-makers and the American public.

For some, this will mean at least one big change.

“It’s clear you won’t be leading with, ‘Israel wants a two-state solution,’” said Jennifer Laszlo Mizrahi, former head of The Israel Project and veteran expert on pro-Israel public advocacy. “This has always been a very important message, but messages need to be credible.”

But other activists say that they intend going on doing pretty much the same thing — highlighting the negative role played by Palestinian negotiators and stressing Israel’s history of willingness to talk and to compromise.

“These are messages that have resonated, and I’m confident will continue to resonate, across the political spectrum,” said Jason Isaacson, associate executive director of policy at the American Jewish Committee. He added another important message that needs to be highlighted: the mutual strategic benefits the United States and Israel gain from their relationship.

The key issues for those tasked with marketing Israel to American policymakers, lawmakers and the general public is dealing with Prime Minister Benjamin Netanyahu’s statement, just before Israelis went to the polls, that he would not allow a Palestinian state to be formed on his watch, and his dark warning to supporters on election day that “Arab voters are coming out in droves to the polls.” On election day, the Facebook page of Netanyahu’s party, Likud, also warned pointedly that it was “American money” that was bringing out these Arabs to vote.

Netanyahu’s stunningly strong election day victory following dismal polling for Likud just days earlier suggested to many that these 11th-hour appeals helped save him. But the Israeli leader’s public rejection of a two-state solution drew harsh global criticism and led the Obama administration to announce that it would consider alternatives to direct negotiations between Israel and the Palestinians. So far, the administration has not been assuaged by the Israeli leader’s post-election attempts to back away from his seemingly clear statements.

For pro-Israel activists, a public impression that Israel has rejected the two-state solution would be a devastating blow. For decades, almost since the birth of the state, they have based much of their work on depicting Israel as the side seeking peace and the Palestinians as the rejectionists. And since the Oslo peace process began, in 1993, the idea that Israel supports two states for two peoples, subject to Israel’s own legitimate security needs, has been crucial to projecting this stance.

For many of these advocates, salvaging Israel’s standing in America will now require one big shift in the way supporters of Israel make their arguments: the role of Netanyahu himself in their discourse. For years, pro-Israel activists, acutely aware of the telegenic Israeli leader’s widespread popularity in America, deployed Netanyahu as a key asset. With Netanyahu now evoking more highly polarized reactions, advocates will seek to treat him as a distraction from the bigger picture rather than as the embodiment of Israeli policy.

“Remember, it’s the same Israel,” Isaacson urged, stressing that the people of Israel and their yearning for peace have not changed following the March 17 elections.

For the duration of the Obama administration at least, it is likely that attempts to fix relations between Israeli and American leaders are doomed for failure. In response, said Abraham Foxman, national director of the Anti-Defamation League, American Jewish leaders should stress that “The relationship between our two countries is bigger than Netanyahu and Obama…We have to make sure that people understand what is out there and move away from the personality issue.”

Another challenge facing supporters of Israel is refuting the charge of racism following Netanyahu’s election day warning to his followers about Arab voters. This comment grabbed the headlines in the United States and led President Obama to warn that it could “erode the name of democracy” in Israel. For many Americans, who have gone through their own nation’s journey on equal rights, such a blunt and openly hostile racial call by a national leader is utterly at odds with their image of Israel. For some, that image may be affected by the apparent reward Netanyahu received in turn from the voters.

The response, said Josh Block, president and CEO of TIP, should focus on facts and numbers. These show that 29% more Israeli Arabs were elected to the new Knesset in comparison with the outgoing Knesset, and a record number of women were elected to Israel’s parliament as well.

“When you get past the rhetoric of those who want to undermine Israel, you get to the reality, which is that Israel is a more pluralistic state than any other country in the region,” Block said.

But fixing the damage that Netanyahu’s election eve comments caused with the public is only part of the problem for pro-Israel advocates.

Another part of it is the need to mend fences with congressional Democrats.

Following Netanyahu’s speech to Congress, and the events surrounding the address, many Democrats have grown impatient with the Israeli leader, whom they view as a partisan figure working on behalf of the Republicans. A sense of alienation shared by many Democrats could, some activists fear, trickle into the relationship between the two countries, making it harder to count on congressional Democrats’ almost automatic support for Israeli-related legislation.

A Democratic source familiar with the thinking of party congressional leaders argued that this fear was misplaced. Nothing has changed in the fundamentals of relations between Israel and Democratic lawmakers, this source said. They will continue to vote overwhelmingly for funding aid to Israel in all its forms, and will cooperate closely with pro-Israeli advocates.

It remains true that an Iranian nuclear deal, if reached, would likely find most Democrats on Obama’s side. Few are expected to side with Republicans in opposing an agreement that Israel views as a bad deal. But these numbers, the Democratic source noted, haven’t changed in the past month and will not be affected by Netanyahu’s recent comments.

Outreach efforts to Democrats, led by the American Israel Public Affairs Committee and by the Israeli Embassy, are already underway in an attempt to ease tensions and smooth the way for future cooperation.

Democratic media consultant and former Clinton administration aide Steve Rabinowitz said Democrats can be trusted to continue supporting Israel, but relations with them would benefit from some maintenance work.

“The faster that AIPAC and government representatives work to appear to genuinely be trying to fix those feelings, the better,” he said, urging them to do “more of the same, but with even more feeling.”