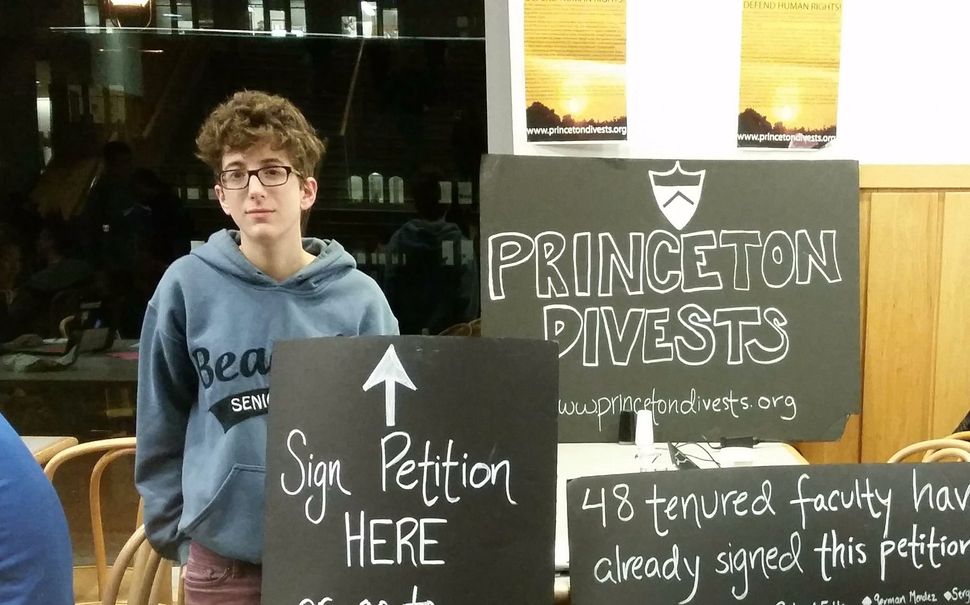 Princeton University undergraduates have defeated a referendum on divestment from Israel by a narrow margin.

The referendum on divestment — the first ever on an American campus in which all undergrads were allowed to vote — lost by a margin of 52.5% to 47.5%. Some 2,032 students, or almost 39% of all undergraduates at the Ivy League school, participated in the balloting, which ran from April 20 through April 22.

The referendum, whose results were announced Friday, was initiated by the Princeton Divests Coalition. The proposal put to the students asked whether the school’s trustees should be called on to divest from “multinational corporations that maintain the infrastructure of the Israeli occupation of the West Bank, facilitate Israel’s and Egypt’s collective punishment of Palestinian civilians in the West Bank and Gaza Strip, or facilitate state repression against Palestinians by Israeli, Egyptian, and Palestinian Authority security.”

Other student bodies, such as those at the University of Michigan and Stanford University, have taken stances on divestment. But their decisions were the products of votes by student governments. Princeton’s referendum marked the first time that an entire student body had the opportunity to vote, which put the issue not just in the hands of the especially fervent or well informed, but also in the hands of students who previously had little or no knowledge of the Israeli-Palestinian conflict.

“Hearing and talking to some of my classmates who are clearly very passionate about this issue has made me more aware of the issues and I’ve definitely noticed an increase in campus-wide interest in this issue,” said Kathleen Ma, a freshman.

The idea of mobilizing students to learn and care about the issue was a key factor in choosing to initiate a referendum, said Katie Horvath, a member of the Princeton Divests Coalition and the former president of Princeton Committee on Palestine.

But after the results were announced the No Divest Campaign, the umbrella group for those opposing divestment, condemned the referendum in an official statement. “We hope the rejection of this referendum will mark the last time the Student Government puts to a vote such a divisive issue so far outside the scope of campus life and beyond the purview of student opinion,” the statement said.

There will, however, be at least one more: Princeton graduate students are due to hold a referendum on the same divestment proposal next week.