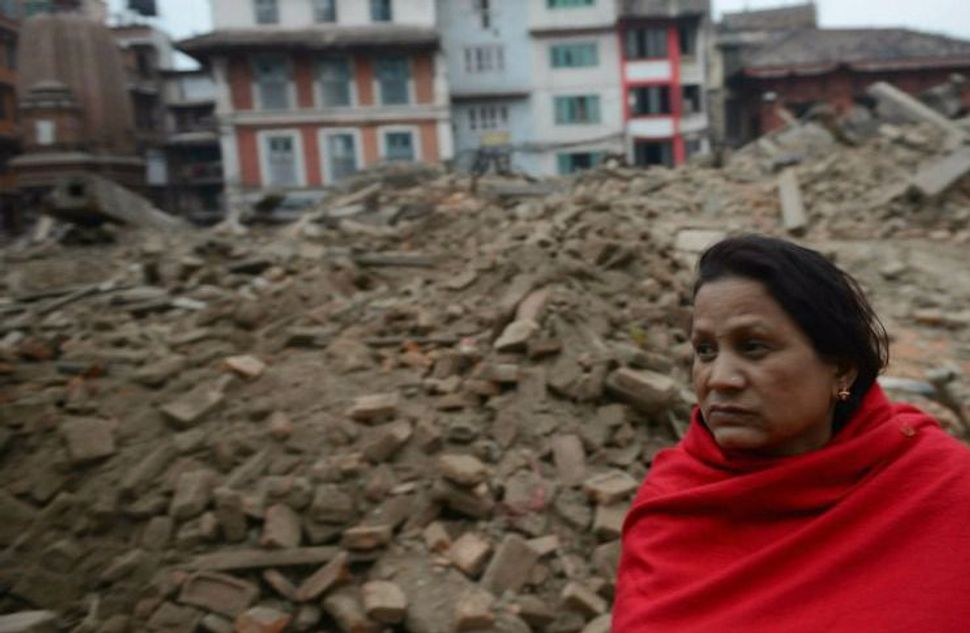 Israeli backpackers traded stories of narrow escapes from the massive earthquake that rocked Nepal and dozens of would-be surrogate parents held out hope they could complete adoptions of newborn babies in the Himalayan nation.

As the death climbed above 1,900 from the devastating temblor, Israel emerged as one of the worst affected foreign nations as thousands scrambled to find missing relatives and friends.

Nepal is a popular tourist destination for young Israelis on post-army treks across South Asia. Gay Israelis and couples with fertility problems also travel to Nepal to have children via surrogate mothers.

Roee Dormea and Eli Amar, both 23, were still missing as of Sunday afternoon. According to Ben Ami Zilber, a family friend, the pair were either traveling on the Langtang Trek on the Tibetan border or were on what Israelis call the Frozen Lakes Trek, located nearby.

“It is kind of vague for us, so we don’t know exactly where they are,” he said. “We are waiting and hoping for the best.” 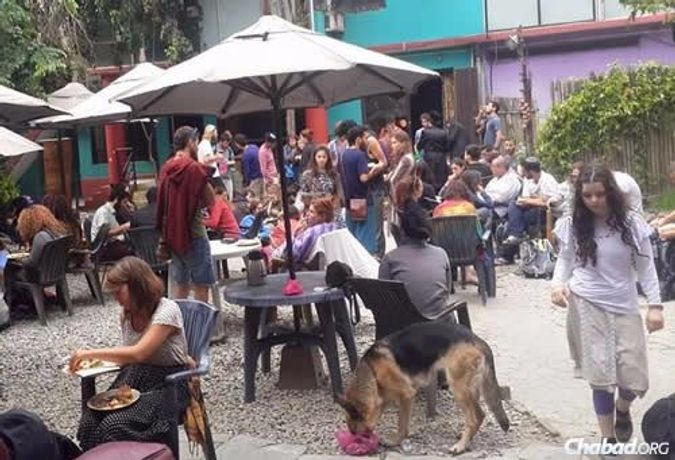 Israelis stranded by the massive earthquake gather at the Chabad center in Kathmandu. Image by Courtesy of Chabad.org

According to the foreign ministry, about 2,000 Israelis are believed to be in Nepal.

As of Sunday afternoon, about 200 Israelis had not made contact with officials or relatives. Those who have been in contact have reported only minor injuries.

Desperate Israelis have taken to the internet in their search, posting photos and contact information on a new Facebook page called Nepal Earthquake Updates and Finding Israelis.

A post about 24-year-old Atar Dan, was shared more than 35,000 times on Facebook. According to his brother, Ohad Dan, Atar was traveling from Kathmandu to Mount Everest with another Israeli friend. He was last in contact with his family on April 22. 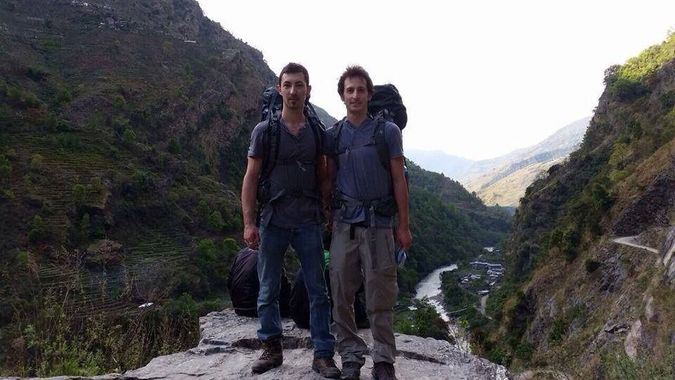 Ohad said that his family experienced a “meltdown” when it hadn’t heard from Atar for many hours after the quake. On Sunday morning Atar finally got in contact from an Internet cafe in a village outside Kathmandu. He was unaware of the scope of the devastation. Nor did he realize that tens of thousands of Israelis were sharing his photo online.

“We are very relieved,” said Ohad.

Tevel Btzedek, an Israeli organization that brings Israeli, American and European Jews to Nepal, Burundi, Haiti and Israel on volunteer programs, said that its 40 volunteers and 7 staff members were accounted for. According to associate director Elana Kaminka, one village where the organization worked, called Kalimati, was all but demolished. 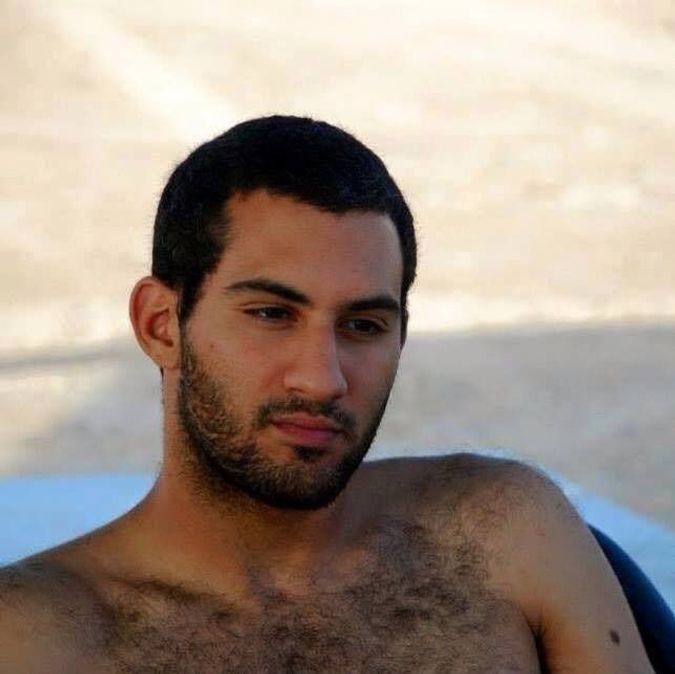 “They don’t have a cent, when they lose their homes they can’t rebuild,” she said. For now, the volunteers are staying put in order to assist in disaster relief. The organization has put a call for donations on its Facebook page.

The Israeli embassy in Kathmandu has become a gathering place for stranded Israelis; about 150 of them are sleeping in tents in the embassy yard. Another 100 Israelis have taken up residence in the Chabad house.

Rabbi Chezki Lifshitz was in the middle of the Torah reading on Saturday when he felt the ground shake.

It was “as if a small windmill was underground and was moving the entire area,” the Kathmandu Chabad rabbi said.

That night, by the end of the first phase of Nepal’s worst earthquake in 80 years, hundreds of Israelis were crowded into Lifshitz’s courtyard, huddled in their tents and sleeping bags. Local hospitals were saturated with patients, so Lifshitz recruited local doctors to treat lightly injured Israelis at his home.

“All the Israelis got here quickly and just stayed here in shock,” Lifshitz told the Israeli radio station Reshet Bet on Saturday night. “People were frightened and scared. The buildings here are swaying as if they’re a leaf in the wind.”

The Israeli government and the Magen David Adom medical service have flown over personnel and supplies to assist in disaster relief.

260-person Israel Defense Forces mission carrying 95 tons of supplies and 40 doctors was scheduled to depart for Nepal on Sunday night, where they will remain for two weeks.

When it arrives on Monday, half the Israeli team will set up a field hospital — including operating rooms, X-ray equipment and pediatric care — to provide emergency medical services to the wounded. The other half will conduct search-and-rescue missions in collapsed buildings.

IDF spokesman Lt. Col. Peter Lerner expects Israel’s field hospital to be the first in operation in Nepal. In the past, the IDF has set up field hospitals following natural disasters in Haiti, the Philippines and Japan.

“It’s one of the missions the IDF sees itself prepared for and willing to do,” Lerner told JTA. “The Home Front Command is ultimately built to carry out evacuation-type scenarios in Israel, so they are planning and preparing and executing for buildings that have collapsed here. If we can take that knowledge and help people across the world who are in desperation, it’s the right thing to do.”

According to the foreign ministry, 25 newborn infants are stuck in Nepal with their new Israeli parents who are waiting to take them back to Israel. These babies’ biological fathers are Israeli men and their biological mothers are anonymous egg donors. The babies are typically carried to term by Indian surrogates who cross the Nepalese border to give birth.

In order for a baby born to a surrogate to receive Israeli citizenship, the child must undergo a DNA test in Nepal. The DNA sample is sent to Israel for verification, and then a judge allows the infant to enter Israel. The process can take several weeks after birth. The foreign ministry is now expediting the procedure with the hopes of getting infants and parents to Israel as soon as possible.

Dana Magdassi, the founder of Lotus Surrogacy, an organization that facilitates Nepalese surrogacy for Israeli parents, said that 10 babies and their 11 Israeli parents are stuck in Kathmandu. They are living in tents outside of the Israeli embassy after they left apartment buildings in the city.

“[The Israeli parents] said that tiles were coming off the walls and things were falling down,” Magdassi said. “They said that some of them took the babies and ran barefoot with a blanket and they stayed many hours on the street, they were not allowed to go upstairs.”

“Some of the babies are only a week old,” she added. “They don’t have enough diapers, food supplies and bottles. [The parents] can’t bathe the babies, they can’t give them normal treatment.”

Magdassi said that she doesn’t know what will happen to the remaining surrogate mothers. Several of them are due to give birth in five weeks, and hospitals are already severely overcrowded.

“We are more worried now about the pregnant surrogates that we still have there.”