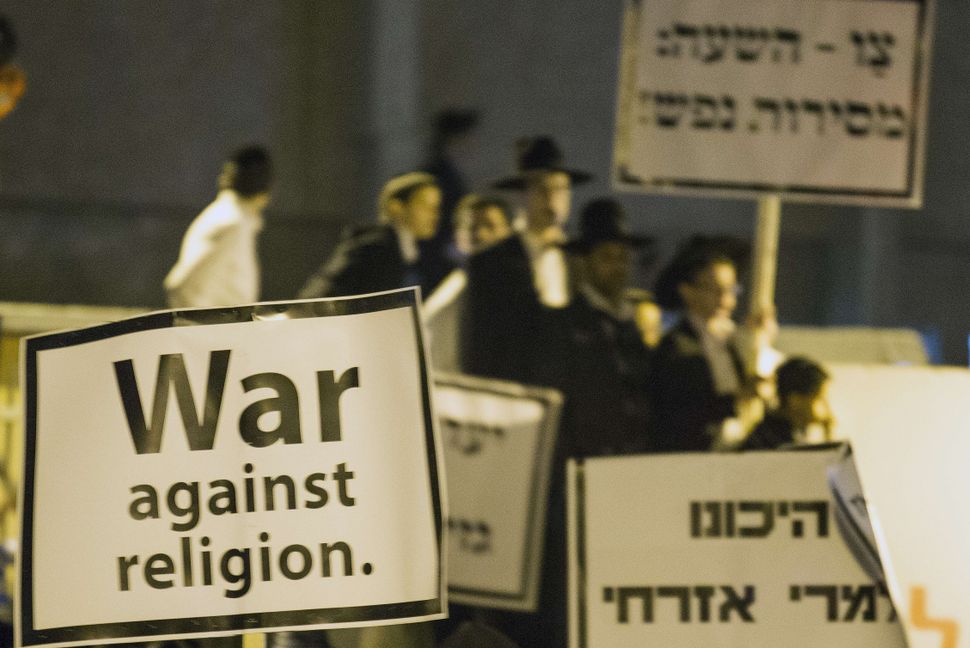 At 21 years old, Yaakov Liwer is eligible to join the Israeli military. But instead, the tall redhead spends his days studying at a yeshiva in Jerusalem’s ultra-Orthodox Geula neighborhood.

“I wanted to go [to the Israeli Defense Forces],” he explained. “I feel a connection. But Halacha says that people that learn are not allowed to go.”

Until recently, Liwer’s choice of Torah study over military service would have exposed him, at least in principle, to the threat of a jail sentence. But no longer. In late April, Prime Minister Benjamin Netanyahu effectively reversed a law to impose jail time on members of the ultra-Orthodox, or Haredi community who dodge the draft. The 2014 law was one of the most controversial pieces of legislation in recent Israeli history, sparking massive protests in Israel and even among New York’s ultra-Orthodox Jews.

The reversal was one condition of a deal the prime minister forged with United Torah Judaism to bring the Haredi political party into the governing coalition he was attempting to assemble by a May 6 deadline following Israeli elections in March. Netanyahu’s concession is a symbol of renewed Haredi power in the new Israeli government, whose completion was expected soon. And it had the law’s original proponents fuming.

“I am asking you and asking everybody, why should my children sacrifice their lives. and my neighbor, who is Haredi, sit in a yeshiva and study?” said Yaakov Peri, a lawmaker with the centrist Yesh Atid party, which pushed the law through.

Representatives for UTJ did not respond to several requests for comment.

The law aimed to force Haredim, who have been effectively exempt from such service for decades, to shoulder an equal burden of national defense. Besides the principle of equity, their service in the Israeli military, the foremost platform for advancement in Israeli society, was billed as the linchpin for lifting Haredim out of the poverty in which many are mired and into prosperous Israel.

Military conscription is mandatory for most Israelis over the age of 18. But not everybody serves. Arab citizens of Israel, who make up 20% of the population, aren’t drafted into the IDF (though the country’s Druse minority do serve, as do some Bedouin). While their secular and nationalist Orthodox counterparts serve in the IDF, Haredi men typically spend their late teens and much of their 20s, and even beyond, in yeshiva, by which time the army has lost interest in them. Over the past several years, Haredi enlistment has been on a slow upward climb. According to Gilad Malach of the Israeli Democracy Institute, only some 25% of eligible Haredi men complete national service.

The 2014 legislation was pushed through to change this. It contained both short-term and long-term goals, said Malach. For the first three years, until 2017, Haredim would be integrated into the military in small numbers that increased yearly. Men between the ages of 22 and 28 were exempt from service, whether they worked or studied Torah. After 2017, all males were expected to report to the military, save for 1,800 high-achieving yeshiva scholars. If they didn’t, they would be subject to the same punishment as other Israeli draft dodgers — typically a 30-day jail sentence followed by enlistment.

Though the threat of jail time for Haredim never materialized, the mere suggestion sparked a conflagration in the Haredi world. Opponents said that mandatory service was an affront to the Haredi lifestyle.

“Even if criminal sanctions are never imposed, the mere fact that a Jew learning Torah full-time might theoretically be subject to criminal sanctions makes a statement that Torah learning has no societal value and constitutes a criminal failure to contribute to the state,” columnist Jonathan Rosenblum wrote in Yated Neeman, a Haredi newspaper, in 2014.

According to several observers, the 2014 law had set Haredim — a portion of whom reject the premise of the modern state of Israel on theological grounds — on a collision course with the Israeli government. Pundits predicted that come 2017, thousands of young Haredi men would camp out in Israeli jails rather than report for duty, with hundreds of thousands of supporters rallying to their defense on the outside.

“I think it creates a situation where people become martyrs in their own community: ‘I would rather go to jail than do this,’” said Bobby Brown, a former Netanyahu speechwriter and political observer.

Not only was the law itself a source of controversy, the law’s effects were, too. Peri claimed that Haredi enlistment was up by 40% in the year span 2013 to 2014, when the law was passed. But Hiddush, an Israeli organization focused on religious pluralism and ending the privileged position of Orthodox Judaism in Israel, said that Peri was conflating figures from before and after the law went into effect. In fact, Hiddush reported, the law actually provoked a 40% downward trend in enlistment. When asked for the most up-to-date figures, the IDF said that in 2014 the government set a goal of enlisting 2,000 Haredim and drafted 1,972.

To Brown and others, the UTJ coalition agreement has done more than reverse the 2014 law, it has derailed the collision course. “I think the country in many ways breathed a little sigh of relief,” he said.

Some say the averted clash could also potentially open up a healthier dialogue about how to get Haredim into the military. One proposal on the table is for the government to cut public aid to Haredi institutions and individuals if the IDF fails to meet enlistment quotas. “We felt that economic measures are the only realistic measures,” said Uri Regev, Hiddush’s president.

But Peri, who was part of a governmental committee tasked at looking at the issue, is convinced that economic sanctions would simply not work. “First of all, it is almost impossible to implement, and secondly, Haredi society can raise a lot of money from abroad in order to pay fines,” he said.

Malach said it could be difficult to implement economic sanctions at this time, given that the coalition agreement has also produced higher budgets for Haredi yeshivas. “The Haredim that learn Torah will get a lot of money, so maybe there will be another reason that they won’t go in a growing number to the army,” he said. “The economic motivation to stay in yeshiva might be stronger than the motivation to go in the army.”

For another Geula yeshiva student, Naftali Gottesman, the threat of jail and economic sanctions are one and the same. “Either way, you are fighting with us,” he said. “You hit us in the front or hit us in the back.”

He and several other military-aged boys, including Liwer, outside the Geula yeshiva said that they felt they were fulfilling their national duties by studying Torah. Jewish law, Gottesman said, commands part of society to be scholars and the other part to be soldiers. They were not opposed to the principle of enlistment, per se, but they said that the military did not operate under Jewish legal standards, which made it an iffy proposition for people like them.

So what should a young Haredi man do if he’s interested in the military?

“He should ask his rabbi,” Liwer said.