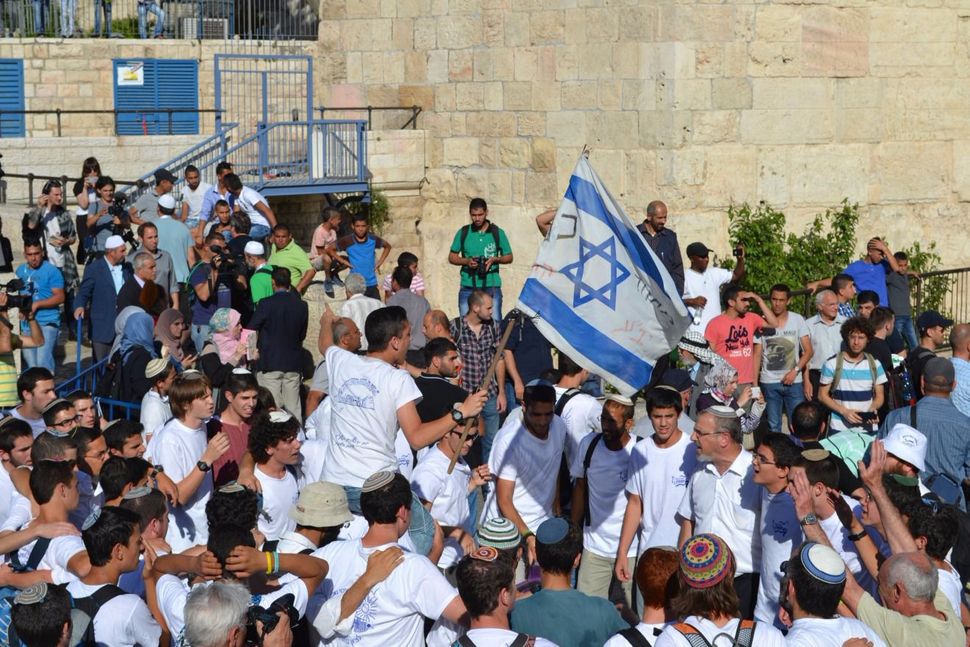 Damascus Gate is one of the liveliest parts of Jerusalem’s Old City, with a sneaker bazaar, a vegetable market and a street food cart vending cups of hot, seasoned corn.

But the shopping corridor was empty of Palestinian shoppers and merchants, the storefronts bolted shut, on Sunday afternoon, normally a business day in the Middle East.

Israeli police had blocked off the area for Jerusalem Day, when tens of thousands of Jewish teenage boys barrel through the Muslim Quarter waving Israeli flags.

The holiday was created as a celebration of Israel’s 1967 capture of the Western Wall and East Jerusalem from the Jordanians. Israel annexed the eastern part of the city after the war, a move rejected by the international community.

“It’s a holiday for me,” said 18-year-old Inan Bar-Lev. “This is the day we returned to Jerusalem.” 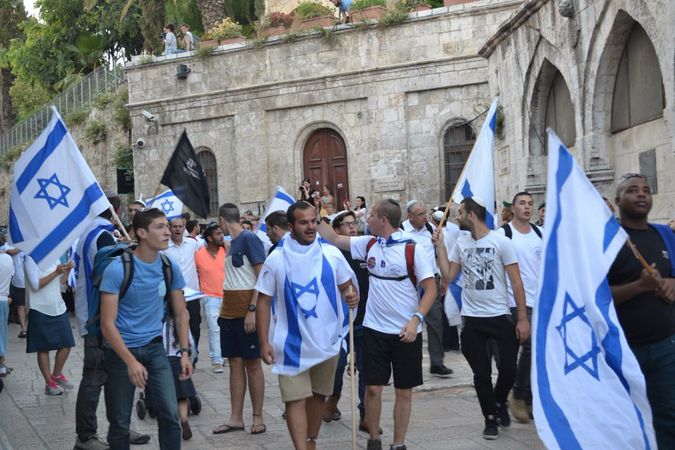 Jews march to mark Jerusalem Day, which commemorates the capture of East Jerusalem in the 1967 war. Image by Naomi Zeveloff

Teenage boys were bussed in from all over the country for the event. Many wore white T-shirts from their yeshivas, including the one run by Ateret Cohanim, an organization whose mission is to bring Jewish settlers into Jerusalem and to force Palestinians out.

The parade kicked off in late afternoon, with the young men dancing in circles with flags in the pavilion in front of Damascus Gate. They sang “Jerusalem of Gold,” the 1967 Naomi Shemer anthem.

“I came to dance with the flags,” said 17-year-old Dror Carmel. “It’s very important to show all the Arabs we have a strong nation.”

“Don’t say that! It’s radical!” chided a boy next to him.

Carmel was pulled away into the crowd, but shouted back to me: “We love Israel and we don’t want anyone to die! Thank you!”

In recent years the Jerusalem Day parade has turned into an ultra-nationalist event, with participants shouting “Death to Arabs” and “Muhammed is Dead.”

This year, a civil rights group petitioned the High Court to redirect the parade route out of Palestinian areas of Jerusalem to avoid violent clashes. The court rejected the petition. But it also said that police must arrest those who chant racist slogans.

A small Palestinian demonstration amassed behind a guardrail at a nearby overlook. Protestors waved Palestinian flags and shouted at the Jewish revelers below. 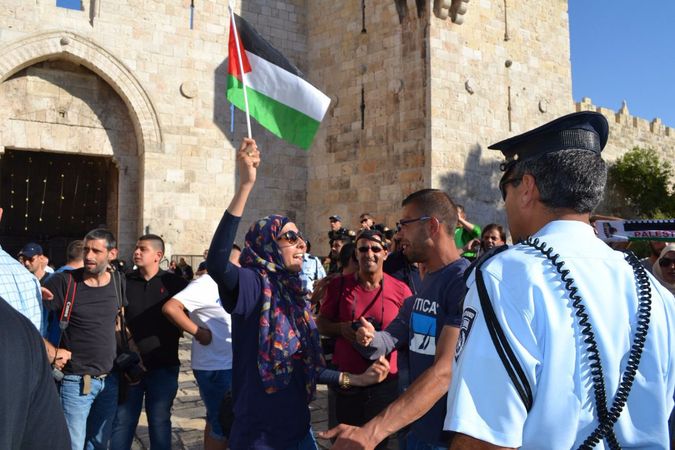 Some observers said the event was calmer this year than in the recent past, perhaps because of the heightened police presence or more scrutiny.

According to news reports, Palestinians injured two police officers by throwing stones. Police arrested six Palestinians, and dragged protesters away by their legs and arms.

The parade continued through the Muslim Quarter, past the Austrian Hospice, the iconic Jerusalem hostel from which tourists gawked at the procession.

Some Jewish parade-goers dismantled their Israeli flags, wearing them draped around their shoulders as capes, as headscarves and as oversized bibs. They used the leftover sticks to pound on the corrugated metal awnings covering Muslim storefronts.

Many of the participants seemed concerned over the parade’s public image.

When I told one young man that I worked for a Jewish newspaper, he demanded to know if I was working in cahoots with liberal organizations.

“Are you the New Israel Fund? Are you J Street?” he asked. “I’m sure you’re a nice person but it’s my personal policy not to talk.”

“Why are you taking pictures?” asked another. “Where do you work?”

Outside of the Austrian Hospice, a man in a dark T-shirt passed out red carnations.

He was volunteering that day with Tag Meir, a group that organizes against Jewish extremist “price tag” attacks against Palestinians.

I asked him whom he was giving the flowers to in such an unsympathetic crowd.

Gesturing to the parade-goers, he said: “But they don’t like flowers. It’s to bring some light. It’s back to the 60s.”

On my way back out of the Old City, I met Yasser Qous, a 39-year-old Palestinan shop owner who lives and works in the Muslim Quarter.

He said that the Jerusalem Day parade made him worry that Israelis are attempting to make Jerusalem like Hebron, where small numbers of Jewish settlers live protected by heavy military presence in the predominantly Palestinian city.

Quos had been locked out of his neighborhood for four hours since the parade began earlier that afternoon. I asked him when he could return home.

“Not until they open the gate for us.”