At Hadar Goldin’s funeral in Kfar Saba, Israel, last year, a slim casket draped by an Israeli flag was lowered into the ground. But the body of Goldin, a 23-year-old soldier, was 50 miles away in Gaza, where it has been held captive by Hamas since last summer’s war with Israel.

The Israel Defense Forces retrieved enough of Goldin’s remains so that its chief military rabbi permitted a funeral to take place. But while the burial helped Goldin’s family members to accept his death, they have been unable to fully move forward.

Now, as negotiations are reportedly being held over a long-term Israel-Hamas ceasefire, his family has launched a quiet campaign to bring his body back to Israel.

“He was declared dead, but he is also a prisoner of war,” said his mother, Leah Goldin.

Goldin was killed in one of the most high profile events during Operation Protective Edge in the breakdown of a shaky ceasefire between Israel and Hamas. On August 1, 2014, Hamas fighters ambushed Goldin and two other Israeli soldiers, making away with Goldin’s body through the tunnel from which they emerged. Unsure at that point if Goldin was dead or alive, the IDF implemented what it calls the Hannibal Directive, a controversial order to act in whatever way necessary avoid the capture of a soldier, even if it means endangering that soldier’s life. In the hours after Goldin’s disappearance, the IDF unleashed a massive bombardment in Rafah, killing 135 Palestinian civilians according to Amnesty International. The attacks continued even after the IDF determined that Goldin had died, a day later. Amnesty said it found strong evidence of war crimes in Israel’s behavior on so-called “Black Friday,” a charge that Israel vehemently rejects.

Israel’s Military Advocate General is looking into the use of the Hannibal Directive to determine if a criminal investigation into the IDF’s behavior is warranted. The MAG has not released its findings.

A year after the war, Israel and Hamas are said to be discussing a long-term ceasefire via international intermediaries. It could pave the way for the rehabilitation of the Gaza Strip, where 17,000 homes were destroyed in last summer’s war. Israel has denied that it is engaging in such talks, while Hamas has told Arab media that there has been “positive” contact between the sides. 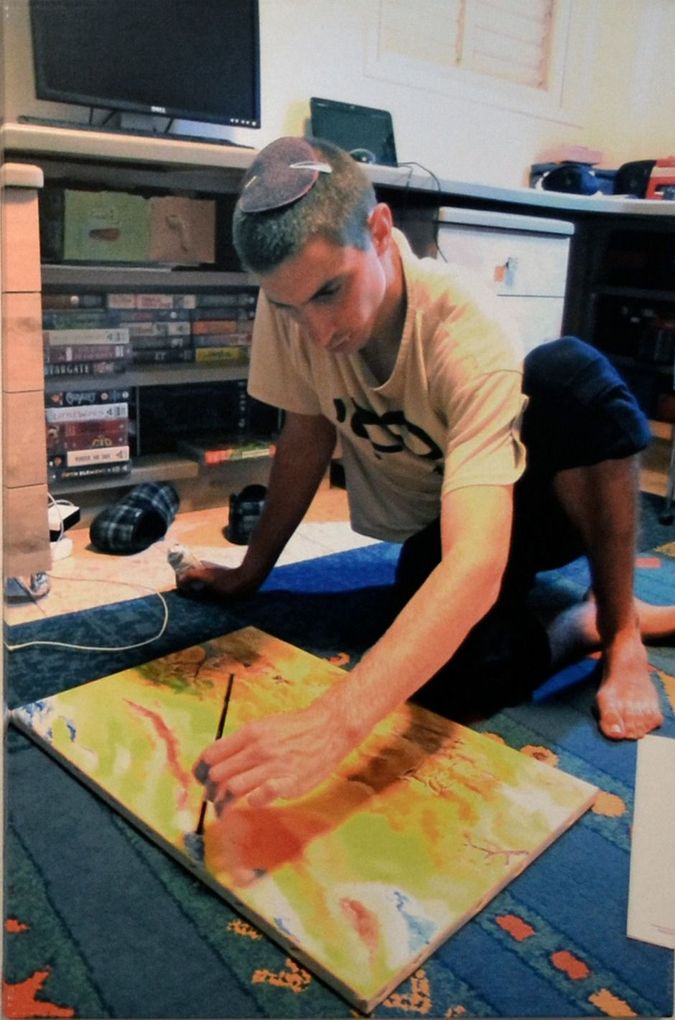 Artist: Hadar Goldin is shown painting in a December 2013 photograph by his mother. This painting and a number of other works are on display at the Ein Hod artists’ village. Image by Leah Goldin

Meanwhile, Israel is said to have approached Hamas through a third party to retrieve four Israelis, two dead and two alive, from the Gaza Strip. In addition to Goldin’s body, Hamas is also holding the remains of Oron Shaul, a soldier who was killed along with six other Israeli fighters in Operation Protective Edge when an anti-tank mine exploded under his armored vehicle in July. Hamas claimed that it captured Shaul alive, but the IDF later confirmed that he was dead. Hamas is also holding Avera Mengistu, an Ethiopian Israeli who jumped the border fence into Gaza last year. Hamas is also believed to have a Bedouin Israeli from the Negev.

According to Gershon Baskin, an Israeli with close knowledge of Hamas and the backchannel negotiator to release Israeli soldier Gilad Shalit from Hamas in 2011, negotiations over the captives’ release have not yet begun. The reason, said Baskin, is that Hamas demands to deal first with the issue of Palestinian prisoners who were freed in exchange for Shalit and then rearrested by Israel during last summer’s lead-up to the war. According to documents published by Israel’s MAG, at least 50 of the 1,027 prisoners released were rearrested. Most of them were accused of committing a new offense and had their original term reinstated, and a half dozen violated the terms of their parole and received shorter sentences. A Hamas spokesperson did not return a request for comment.

Analysts say that the fact that Hamas does not have a live soldier in its grasp tips the negotiations in Israel’s favor. While the Israeli public is sensitive to the mourning families, it knows that bringing the soldiers home won’t change their fate. Nor does the plight of the two Israeli civilians who wandered into the strip — both from marginalized groups in Israeli society — hold the same sway in the public imagination as a soldier captured while defending the state of Israel. The lack of public outcry translates into extra time for Israel.

“The pressure is not acute,” said Yoram Schweitzer, a senior research fellow at the Institute for National Security Studies. “Not from a time perspective and not in the price that Israel is willing to pay.”

Now that the yearlong mourning period has ended, the Goldin family says it’s time to bring its son back. The family is walking a fine line in its efforts to put Goldin on the public agenda. On the one hand, it wants to raise awareness about him when most Israelis have moved well beyond last summer’s war. But on the other hand it doesn’t want to be seen as unduly pressuring the government particularly now that many Israelis are critical of the Shalit deal. Israeli media has estimated that six Jews — including the three teenagers Eyal Yifrach, Gilad Shaar and Naftali Frenkel who were kidnapped and murdered in the 2014 run up to the Gaza engagement — were killed either directly by prisoners released in the Shalit deal or with their involvement.

“Whenever we started to raise the issue of bringing Hadar home, the feedback we got from friends was ‘Wow, but what would be the price?’” said Leah Goldin.

The family’s answer is to publicly lambast Hamas for holding its son rather than criticize the Israeli government. Knowing that a prisoner exchange is unrealistic, Leah Goldin wants his release to be tied to the reconstruction of Gaza. “Just bring back the bodies,” she said, “and Gaza can be like Singapore.” The family has no specific proposal, but it is peddling the broad concept with Israeli lawmakers like Justice Minister Ayelet Shaked, Knesset speaker Yudi Edelstein and Knesset member Gilad Arden.

Speaking on the condition of anonymity, a senior Israeli official said that “of course” Israel is committed to bringing the bodies home, adding that it is a “complex process with many challenges.”

Though the current Israeli climate lessens the likelihood of a prisoner swap for the two soldiers’ remains, there is plenty of precedent for such a deal, dating back to the 1950s. Since Israel’s founding war, the government has committed itself to bringing soldiers killed in enemy territory back home to fulfill the principle of “kever Israel,” the burial of Jews in the “grave of Israel.”

In at least one case, Israel didn’t know if it was trading prisoners for soldiers or their remains. In 2006 the United Nations negotiated the release of Israeli soldiers Ehud Goldwasser and Eldad Regev from Hezbollah in return for convicted terrorist Samir al Quntar, four other Lebanese militants and more than 200 bodies of Arab fighters. Up until the 11th hour, Israelis held onto hope that the soldiers would return home alive, but it turned out they were killed in the initial cross-border ambush that sparked the 2006 Lebanon War.

Just a few weeks into its efforts, the Goldin family has taken an understated approach, especially compared with the years-long media campaign waged by Shalit’s parents. However, the family is also looking to influence opinion abroad: in July, Goldin’s twin brother, Tzur Goldin, spoke at a Washington, D.C. conference of Christians United for Israel, the hawkish pro-Israel evangelical organization. 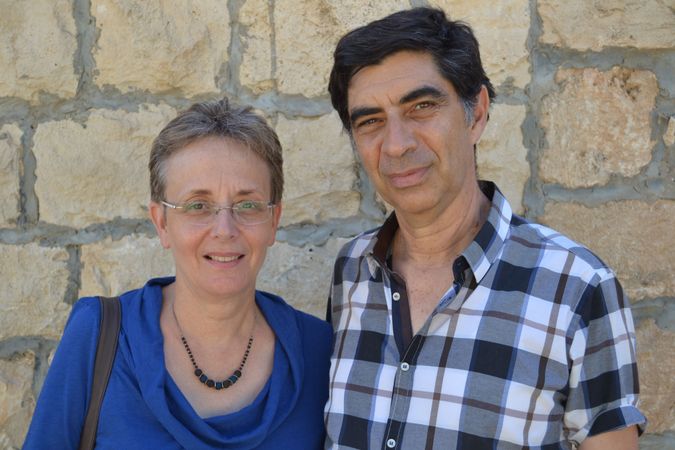 Parents: Leah and Simcha Goldin are quietly pushing the relevant governing bodies to bring them their son’s remains. Image by Naomi Zeveloff

Goldin’s parents also told his story through an art exhibit in the Ein Hod artist village outside Haifa. More than a dozen of Goldin’s drawings and paintings were on display showcasing the 23-year-old’s artistry, from doodles he drew in the margins of his mother’s Sabbath shopping lists to acrylic paintings of the Negev. Leah Goldin explained that her children had an artistic dialogue from a young age. In addition to his twin, Tzur, Goldin is survived by two other siblings, Ayelet, 36, and Hemi, 32, a Jerusalem lawyer who is part of a well-known dance troupe in Israel.

Mutual friends of Goldin and Shaul, the other missing IDF member, have tied their efforts together, creating a logo of two hands making a heart shape with a large space in between, to show that the heart is missing a piece. They are trying to make the image go viral by asking supporters around the world to post photographs online with their hands making the sign.

Shaul’s family turned down a request for an interview. Since no part of his body was recovered, the family did not have a funeral, though it did sit shiva, observing the traditional Jewish mourning period.

If Goldin is not returned in the near future, his family has hinted that it might push harder.

“We insist that the return of the fallen soldiers be a national mission of the highest priority,” Tzur told Israeli President Reuven Rivlin at a meeting in June, “and not a family’s personal interest.”

Reach Naomi Zeveloff at [email protected] or on Twitter, @naomizeveloff