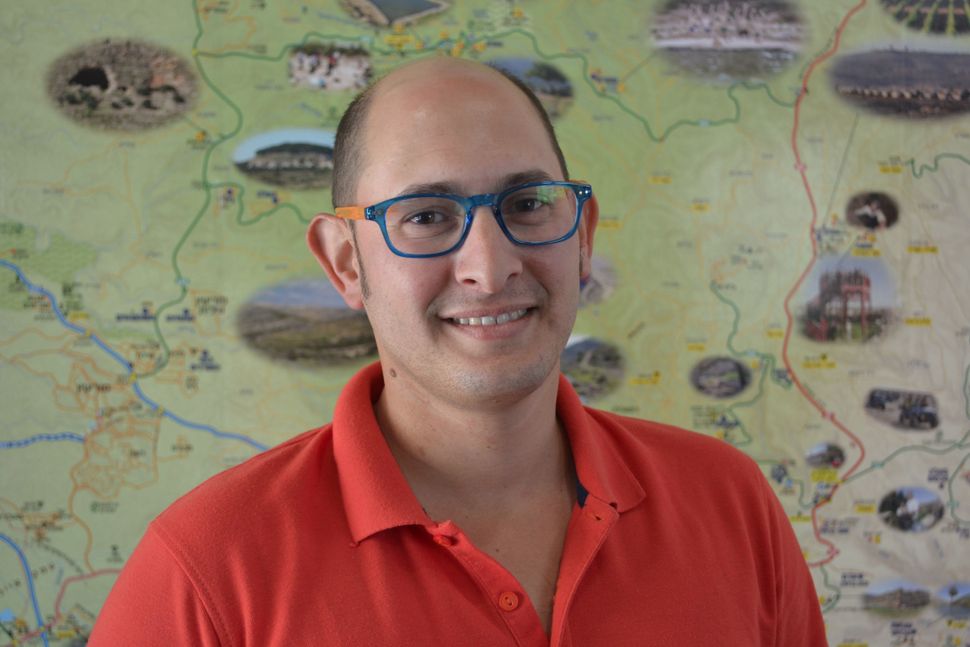 Assaf Lessner is head of marketing at Binyamin Tourism. Image by Naomi Zeveloff

Shiloh, West Bank — On a Thursday in June, a group of Christian tourists from San Jose, California, stood in a shady grove in Shiloh, a Jewish settlement in the Israeli-occupied West Bank.

Their tour guide, Yisrael ben Arie, who was wearing an “Ancient Shiloh” T-shirt and work boots, explained that they were standing on a stage where real-life Bible stories played out. An ancient Israelite society once existed here, he said, evidenced by a dusty stone rectangle that might have housed the Tabernacle.

Visiting Shiloh is a way to “see the Bible coming alive,” said Mary Lou Perez, who was there with her husband, Osbaldo Perez, pastor of San Jose’s Jubilee Christian Center, an evangelical church.

It’s an experience, she said, that would be much more vivid if her group of 130 could stay overnight in the West Bank. As of today, there are no large hotels in the Israeli settlements. Staying in a Palestinian city like Ramallah, Jericho or Bethlehem was out of the question for Perez’s tour, which she said was avoiding those areas out of safety concerns.

Instead, her group was staying in a Jerusalem hotel. It was a shame, said Perez, who was on her third Christian trip to Israel and the West Bank.

“Why won’t Israel or whoever is in charge of this build a nice big one?” she said.

The next time Perez comes back, she might get her wish. Last June, the tourism ministry announced that it would cover 20% of hotel construction costs in the West Bank. The program is essentially seed money to set up a hotel infrastructure in an area where many tourists visit — estimates are about 1 million a year — but few stay overnight. While there are many bed and breakfasts, today there is just one hotel in the settlements, the privately funded, Bible-themed Eshel Hashomron, in Ariel.

Tourist lodging in the settlements has been the cause of controversy of late. In January, Palestinian rights activists launched a boycott of Airbnb, the private home rental service, when it was revealed that the site included dozens of listings in Jewish-only settlements in the West Bank, all of which were labeled as being inside Israel instead of on occupied land.

For many settlers involved in tourism, blurring the line between Israel and the West Bank is exactly the point. They want the territories Israel captured during the Six Day War to be a typical stop on every tourist’s itinerary, just like the Tel Aviv beaches or the Dead Sea. The rationale is twofold: to bring more money to the settlements and to dispel preconceived notions about settlers by showing foreigners a good time in “Judea and Samaria,” the biblical terms many Israelis use for the West Bank.

In addition to biblical sites, there is plenty on offer for the secular tourist, from zip lines in Efrat to wine tasting in Psagot. At the entrance to Shiloh, an off-roading company advertises bumpy rides on the West Bank’s rural roads. The visitors center there sells cold sodas, settler-made olive oil soaps and a Second Temple “do-it-yourself kit.”

“People make their opinion without visiting or seeing this place, and we want to make it accessible,” said Assaf Lessner, head of marketing at Binyamin Tourism, which advances tourism in the Binyamin region in the northern central West Bank. His company had the biggest tent at a Tel Aviv tourism expo this year. A sign hangs in his office, asking visitors to hashtag their photos on social media with #go_binyamin, offering a prize for the best photos. 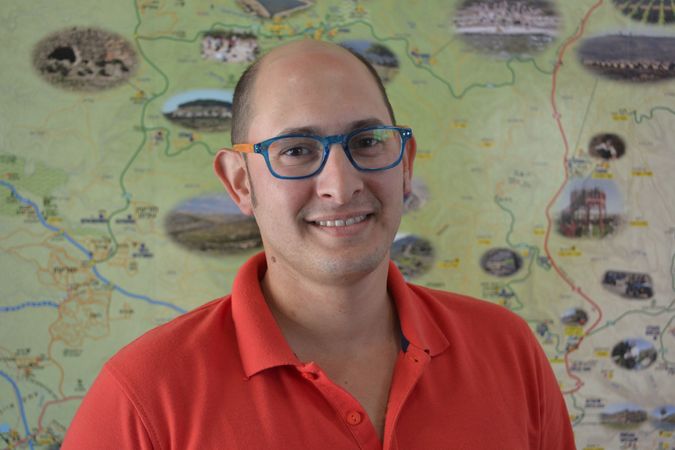 Assaf Lessner is head of marketing at Binyamin Tourism. Image by Naomi Zeveloff

Christians make up about half of the tourists who visit the Binyamin region. It’s a market that settler leaders would like to grow by positioning the West Bank as an area bursting with biblical history, not contemporary conflict, checkpoints and soldiers.

“Being here is remembering what Jesus did for us,” Mary Lou Perez said. Osbaldo Perez added that it is easier to transmit his message to his congregants once they have seen Bible sites with their own eyes. “When we are here, we can relate to it more,” he said.

Settler tourism leaders contend that Israel is losing out on tourist dollars by not putting the West Bank’s biblical gems, like the Cave of the Patriarchs, in the flashpoint city of Hebron, front and center on every travel brochure. Of the 3 million tourists who visited Israel in 2015, just over half were Christian.

“Tourism is aligned with the international conversation about Israel,” said Avi Zimmerman, head of the Ariel Development Fund in the Ariel settlement. “There is a defensive mode. Israel thinks it is better off selling gay tourism and beaches, which may or may not be statistically accurate.” He pointed to a clear lack of “national effort” to “make Israel the biblical tourism capital of the world.”

Yet despite settlers’ efforts to blur the Green Line, settlement tourism — like the settlements themselves — remains highly controversial. Palestinians say that this kind of tourism is part of the Israeli government’s efforts to cement permanent control over the West Bank, obliterating the chance of a two-state solution.

“There are several Palestinian archaeological and heritage sites in the occupied West Bank that are managed by Israel, hotels that have been built in occupied territory, theft of Palestinian archaeological objects, and the latest are those who claim to offer a ‘biblical experience’ on stolen land,” said Xavier Abu Eid, an adviser to the Negotiations Affairs Department of the Palestine Liberation Organization.

Try as they might, tourism leaders can’t erase the reality on the ground in the West Bank, with its frequent violent flare-ups. Zimmerman said tour groups that visit Ariel switch to bulletproof buses when they go east, toward Nablus. Mary Lou Perez conceded that her biblical tour did not include important sites that were under Palestinian control. When asked if she was planning on stopping in Bethlehem, which is administered by the Palestinian Authority, she said no: “I think our guides are taking precautions.”

Yamen Elabed, an independent tour guide based in Bethlehem, blamed the media for the West Bank’s dangerous reputation, saying it is “100% safe” to visit Palestinian sites. He noted that many Israeli tour companies bring tourists to Bethlehem, where a Palestinian guide will show them the Church of the Nativity before they are whisked back into Israel.

He lamented the fact that tourists don’t spend enough money or time in Bethlehem, which has the highest unemployment rate in the West Bank. While settlers say they want tourists to see the West Bank beyond the Israeli-Palestinian conflict, Elabed believes that any tour without a discussion of the occupation is incomplete.

“Visiting only holy sites and walking away without understanding the situation is a waste,” he said. “If people care about the religious sites, they should care about the people who live in the Holy Land and make an end to the occupation.”

Yet with biblical tourism as the main option on offer, politics doesn’t often factor into the equation, Zimmerman said. “Most of our biblical tourism is Christian,” he said. “These are not politically keen people. They know where they are on the biblical map.”

Yet this devotion to the biblical map is what fuels evangelical Christian political and financial support of Israel, as many believe that the area Palestinians claim for their state belongs under Jewish sovereignty.

Settler leaders didn’t always see tourism as part of strengthening the settlement enterprise. According to Lessner, the settlers were too focused on building their own communities to think about welcoming foreign visitors. Originally, settlements were not even zoned for hotel construction; a process to reverse this is now underway in certain settlements, in part to take advantage of the government’s program. Lessner said that there are two specific locations where future hotels will be built.

Settlers say their efforts are starting to bear fruit. Miri Maoz-Ovadia, the spokeswoman for the Binyamin Regional Council, said that while tourism has been down since Palestinian attacks intensified last October, the trend is on a general upswing. She added that “Judea and Samaria” are increasingly on the curriculum for tour guiding schools in Israel.

“Once they discover it, they come here in masses,” she said.