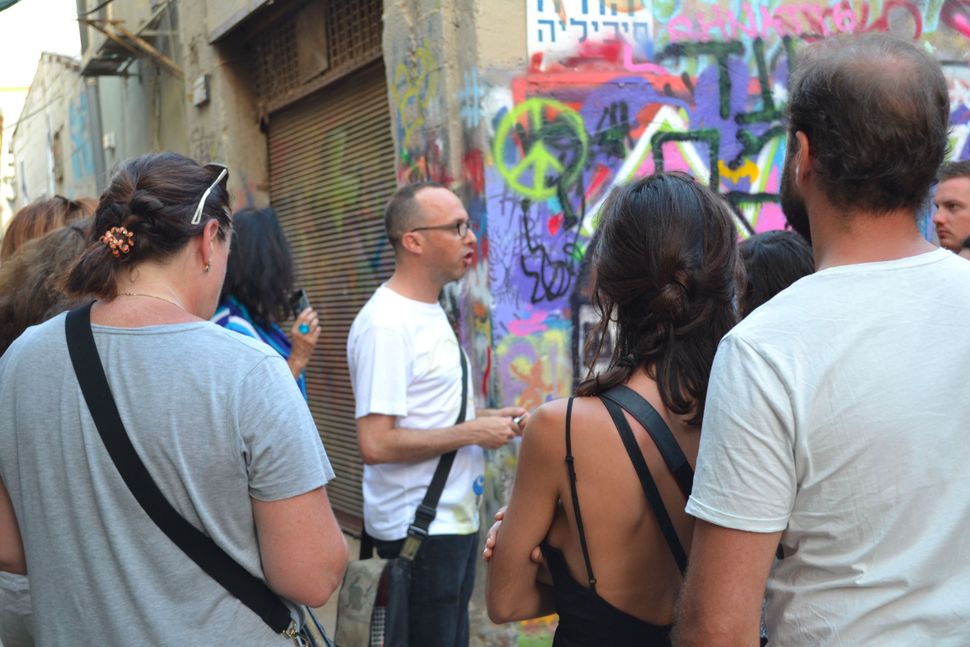 On a sweltering July afternoon, a group of tourists gathered on a street corner in Florentin, a South Tel Aviv neighborhood cloaked in graffiti. Though street art tours are a popular among travelers in Tel Aviv — one even invites visitors leave their own tag — this was no typical graffiti outing. 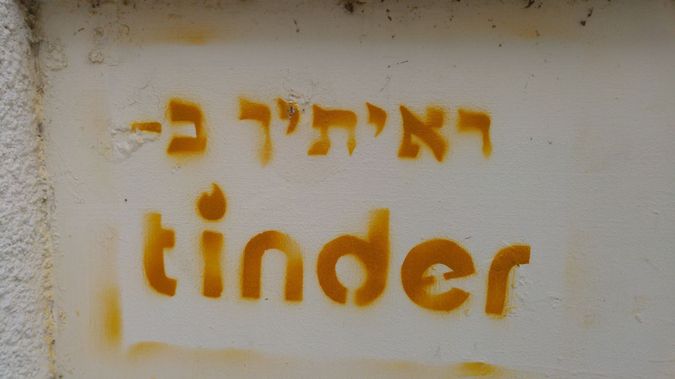 “I saw thou on Tinder.” This stencil uses biblical language, an example of the way street artists are riffing on ancient Hebrew themes in their work, said Sharett. Artist unknown. Image by Guy Sharett

Wearing blue sneakers and carrying a green laser pointer, tour guide Guy Sharett pointed out a stenciled sentence above one Tel Aviv doorway. Translating from Hebrew, he read,“If I forget thee, Oh Jerusalem, it is because of Tel Aviv.” He explained that it was a play on the Psalm, “If I forget thee, Oh Jerusalem, let my right hand forget her cunning.” 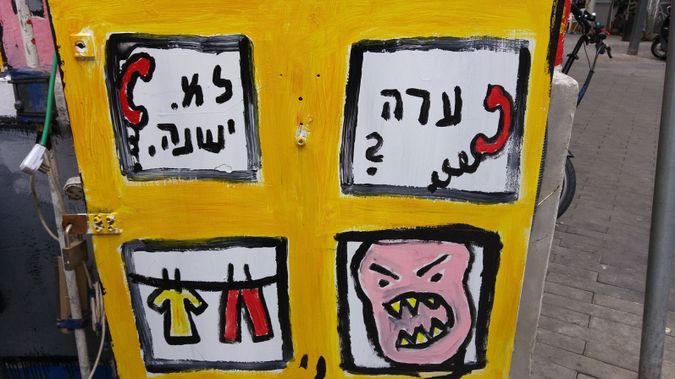 In this colorful piece by Ze’ev Engelmayer and Oren Fischer, two characters converse: “Are you awake?” “No, I am sleeping.” Image by Guy Sharett

Sharett, 44, has a day job at Google but in his spare time he works as a Hebrew teacher and tour guide. He’s developed a singular niche by teaching Hebrew through graffiti and other signage, focusing on the written messages of the South Tel Aviv streets in order to bring Israeli culture to life. In other words, if Tel Aviv’s walls could talk, Sharett would be their interpreter. 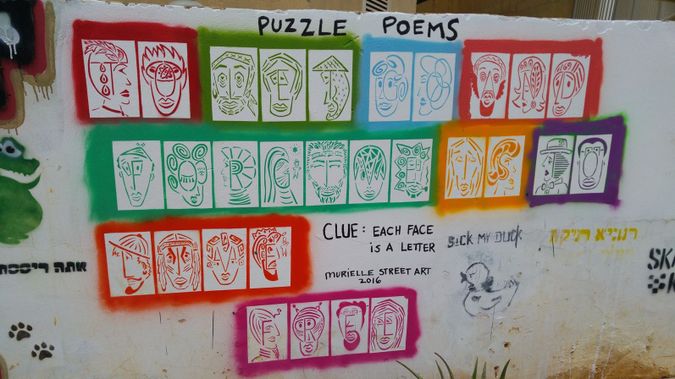 A puzzle poem by street artist Murielle reads in English “To let go and forgive is to live free”. Image by Guy Sharett

“It’s not a street art tour, it’s an urban culture tour,” said Sharett, who also hosts a popular podcast called Streetwise Hebrew. “We can work on different texts and the linguistic landscape of the street, as opposed to only looking at images.” 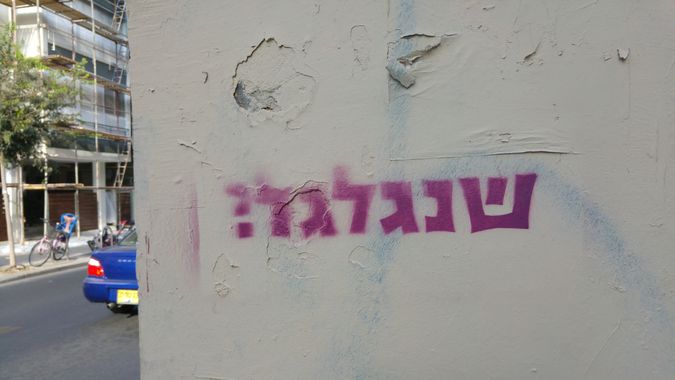 He began his tours five years ago during the so-called social justice protest of summer 2011, when hundreds of thousands of demonstrators gathered on Tel Aviv’s Rothschild Boulevard to demand fairer rent and food prices.

Sharett accompanied a few foreign students to the protest one day, and realized that they couldn’t understand the signs the demonstrators were holding. It wasn’t enough that they could define the words; they were missing some key cultural references. Sharett figured that the protest signs could be a good tool to teach Hebrew and Israeli culture at once. Soon after, he offered his first on-the-street Hebrew course on Rothschild. 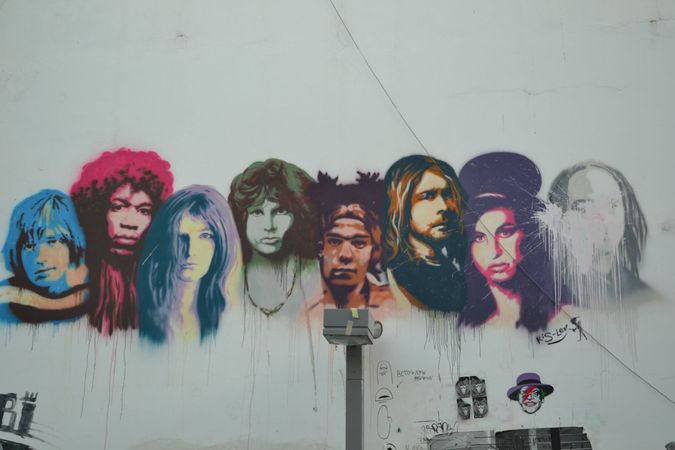 The “27 Club” of rock musicians who died at 27. The artist, Jonathan Kislev, included himself on the far right, said Sharett, and then covered his face with paint. Image by Naomi Zeveloff

Today, Sharett offers four walking Hebrew courses, one around Florentin’s graffitied walls, another in the nearby Levinsky spice market, a third in the port of Jaffa and the newest at the Trumpledor cemetery to read headstones (including those of some of Sharett’s relatives). 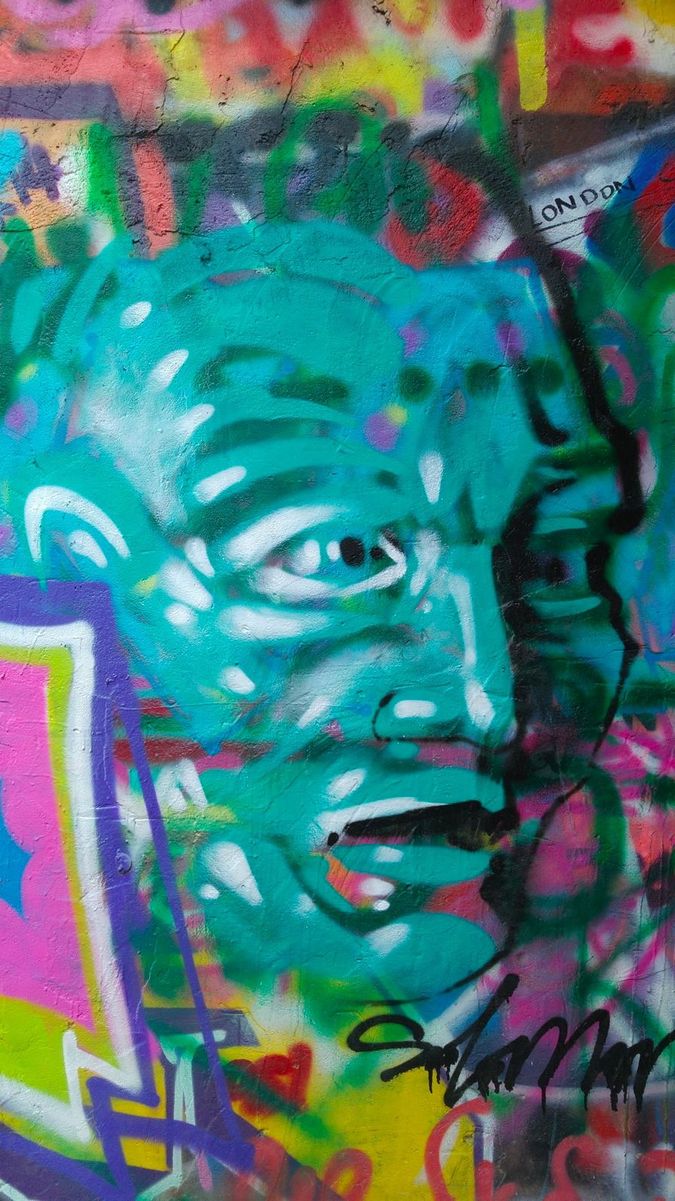 A blue face by Solomon Souza. Image by Guy Sharett

Sharett’s tours are frequented, he said, by “ulpan survivors” and “Sunday school refugees,” people from whom Hebrew lessons did not reflect a “fun, happening slangy language but Sunday punishment,” he said. Sharett tapped into the desire to learn Hebrew as it is spoken by Israelis in the Israeli streets. 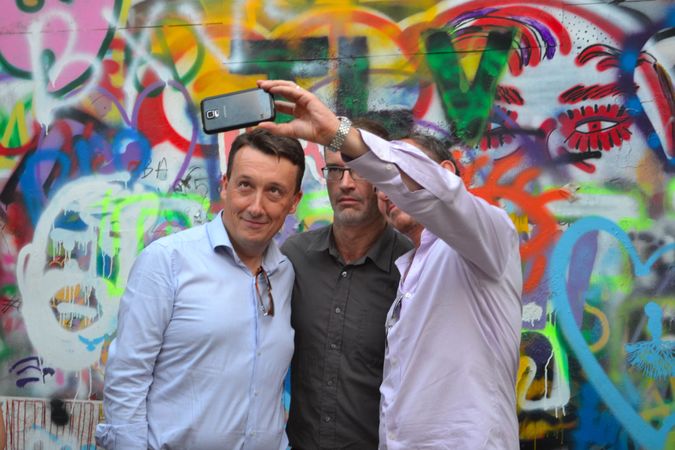 Walking among the graffitied walls, Julie Altman and Alex Sagan, an American couple that spend part of the year in Israel, said they appreciated the tour as an off-the-beaten-path experience.

“It’s exploring a neighborhood we don’t always get to and seeing people from all over the world,” said Altman

Sharett himself is a lifelong language learner. The son of a tugboat skipper and a painter, he grew up in the Israeli port city of Ashdod, a onetime immigrant hub that was a “linguist’s paradise,” he said. Fluent in Hebrew, English, Arabic, French, Italian, Indonesian and Thai, Sharett works in Google’s language department. 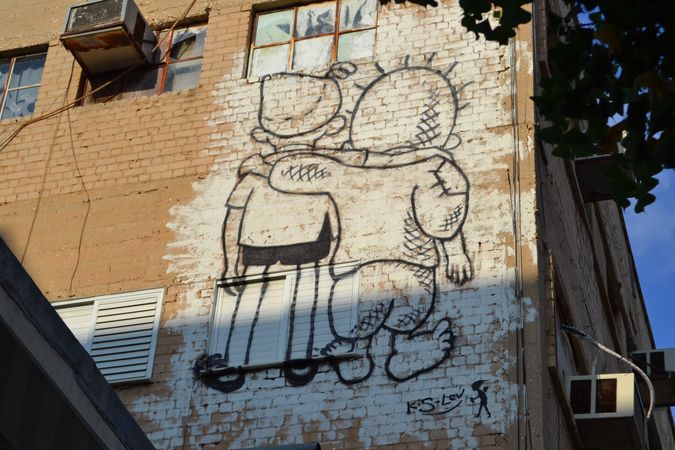 Florentin, where Sharett lives, has long been a canvas for street art in Tel Aviv but it became even more graffitied recently when the city decided to demolish some carpentry shacks in the neighborhood to make way for new condominiums. Graffiti artists saw this as a green light to go ahead and paint the area, knowing that they wouldn’t be penalized for tagging a place that would soon be torn down.

Sharett’s tour is always changing based on what’s new in Florentin, making no two tours alike.