The Drive to Make the Perfect Israeli Baby 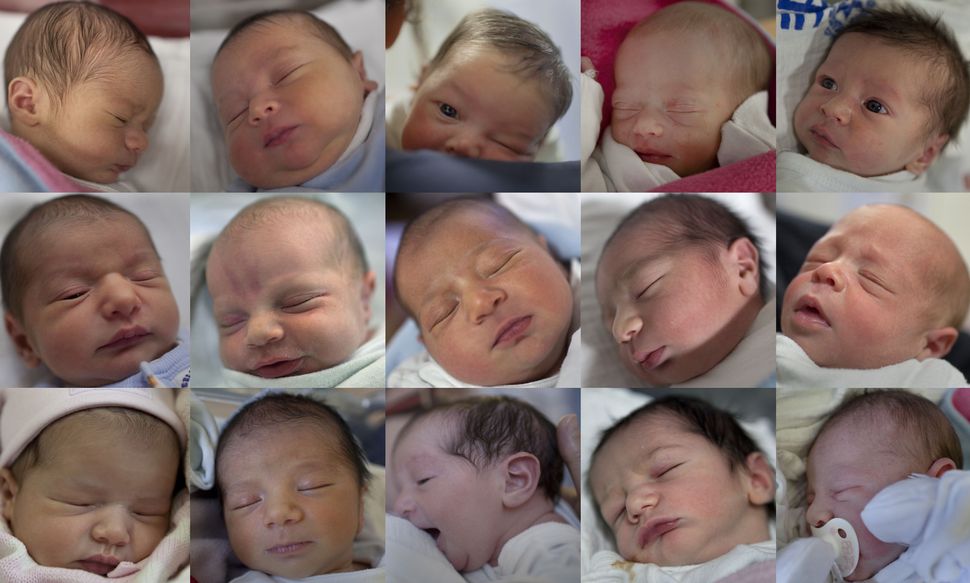 ‘Every mother in Israel wants a perfect baby, no less than that,” said Dr. Avraham Steinberg, the chief medical ethicist at Jerusalem’s Shaare Zedek Medical Center, at a conference on Jewish genomics in Israel in July.

For the past 12 years, Shaare Zedek has been in the business of making a more perfect baby. The medical center is home to Israel’s largest unit for preimplantation genetic diagnosis ( PGD), a procedure available to couples at risk of passing on genetic diseases. Using a mother’s eggs and a father’s sperm, embryos are created in a laboratory. The embryos are tested for genetic disorders and, if they’re healthy, implanted in the mother’s uterus.

Just over 500 babies have been born through the help of Shaare Zedek’s PGD unit. The center was created in 2004 with an initial $700,000 personal donation from David Fuld, a New York mohel, and his wife, Anita Fuld. At the time, PGD was rare in Israel. Today, it is on offer at least 10 hospitals in the Holy Land. Israel’s public health insurance covers PGD for up to two children per family.

Israelis are among the most avid prenatal genetic testers in the world. Israel’s health insurance basket covers genetic testing for cystic fibrosis, spinal muscular atrophy, and fragile X syndrome, a cause of intellectual disabilities, as well as several other diseases, depending on the ethnic background of the parents. But many Israeli parents supplement these tests with further screening not covered by public health insurance in order to root out genetic ailments.

This practice spans the Israeli Jewish religious spectrum. In ultra-Orthodox communities, the Dor Yeshorim organization, which is based in New York but operates in Israel, tests prospective matches before they are even set up to ensure that both partners are not carriers of the same genetic disease. If they are both carriers, they’re considered incompatible. In secular Israel, many couples go through genetic testing after the woman is pregnant, choosing abortion if the fetus shows signs of genetic abnormality. While ultra-Orthodox Jews don’t abort, they have embraced PGD. At Shaare Zedek’s PGD unit, about half of the patients are ultra-Orthodox.

There are several reasons why Israelis have become avid pre-natal genetic testers. Chief among them is the fact that Israelis tend to marry within their own ethnic communities, which can increase the chance that both parents will be carriers of a disease, said Dr. Gheona Altarescu, director of the PGD unit at Shaare Zedek.

Then there is the social pressure to have healthy babies — and a lot of them. “The Israeli mentality that it is extremely important to have children, and not only one child but several children,” said Altarescu.

At the genomics conference, Steinberg spoke about the ethical implications of widespread genetic testing, warning that in the future, genetic screening could expand beyond genetic conditions to test for personality traits like anger. Societies will have to decide whether it’s ethically and legally permissible to terminate a pregnancy based on traits that some see as undesirable.

Widespread prenatal genetic testing in Israel has also brought with it a slew of lawsuits related to the issue. Ori Dalal is an attorney in Rishon Letzion who specializes in “wrongful birth” lawsuits against doctors by parents of children with genetic disorders. “The doctor didn’t cause the genetic disorder, but because of his malpractice, the information was missing from the parents and they didn’t know about their options of not continuing with this pregnancy,” he said.

Dalal described one such case that was filed before the Israeli government included testing for fragile X in its health basket. The doctor informed the couple that they should be tested for Tay-Sachs, a genetic disorder with a high incidence among Ashkenazi Jews, but didn’t mention there were other tests available to them outside the health basket list. When the child was born with fragile X, the parents sued the doctor and received almost 12.7 million shekels (about $3.3 million).

Dalal said that parents can win millions of shekels in these lawsuits, depending on the cost of care for their children. Last year, he brought 20 such cases to court, and won all of them.

But, he added, doctors are so concerned about getting sued that they have become more diligent about informing their patients of the panoply of genetic tests available. “It is more rare to see a doctor who is not informing the family than it was 10 years ago, ” Dalal said.

The Drive to Make the Perfect Israeli Baby