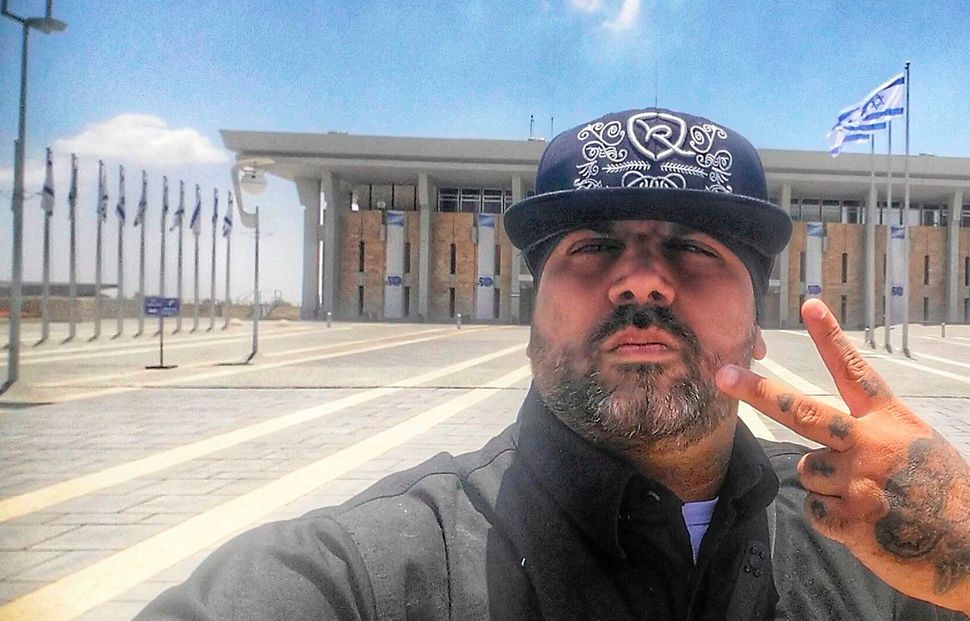 Yoav Eliasi, the Israeli rapper known as “The Shadow,” has suggested on his Facebook page that Israel should castrate dead Palestinian attackers in order to deter Muslim “martyrs” who believe they will meet 72 virgins in heaven. He also said that medical teams responding to terror attacks should “cut out the organs” of dead Palestinians for transplant in Jewish bodies.

For anyone familiar with Israel’s notoriously extreme “talkback” culture — in which online comments sections spiral into hateful discourse — Eliasi’s comments might seem par for the vicious course. But with one of Israel’s most popular Facebook pages with almost a quarter million followers, Eliasi has a platform like no other in Israel (the country’s population is just 8 million). Now, Knesset Member and notorious party boy Oren Hazan is seeking to capitalize on Eliasi’s popularity by signing him up to be a member of his ruling Likud party.

“The public is fed up with the fawning, cowardly leftist dialogue,” Hazan said, according to media reports. “Not for nothing does Yoav have a quarter of a million followers on social media networks.”

Eliasi responded by saying he wanted to “throw dollars at every word” of Hazan’s Knesset speeches, vowing to recruit a “Likud Guard” from his followers, known as “The Shadow’s Lions.”

Born in Safed in northern Israel and raised in Tel Aviv, Eliasi began his rap career in 1990s. After serving in the army, Eliasi began performing with childhood friend Kobi Shimoni, also known as “Subliminal.” The Israeli paper Haaretz described the group’s music as “unapologetically right-wing Zionist, hyper-nationalistic, populist and very angry.” The music spoke to an Israeli public fed up by the failed Oslo peace process and the raging Second Intifada, and the duo’s first 2002 album went double platinum, “turning the Star of David into a symbol of cool among the Israeli rap crowd,” Haaretz wrote. (Today, Eliasi has an image of a fist giving the middle finger breaking through a Star of David on his Facebook page.)

After a short run in the spotlight, the group split up and Eliasi mostly disappeared from public view. In 2011, he took to Facebook and began to post from a provocatively extreme right wing view point about Palestinians and the Israeli left, quickly amassing a following. At times, Eliasi has taken his movement offline and into the streets. In the summer of 2014 during Israel’s Operation Protective Edge in Gaza, he called upon followers to disrupt an anti-war protest. Eliasi showed up with hundreds of counter protesters, who beat the left wing demonstrators with clubs. At least one person was sent to the hospital. According to Haaretz, none of the assailants faced charges.

Haaretz reported that Eliasi’s Facebook page is consistently ranked as one of the Israeli sites with the highest incidence of “hate speech” by the Berl Katznelson Foundation, a democracy education group.

Eliasi said he is not seeking public office at the moment, but he could change his mind in the future. He said that he wanted to affect change from within the party.

“Likud is moving to the left all the time,” he said, according to the Times of Israel. “Sometimes I want to vomit on some of the people [in the party]. The time has come for change in Likud.”