Will Israeli Police Body Cameras Rein In Abuse Against Blacks? 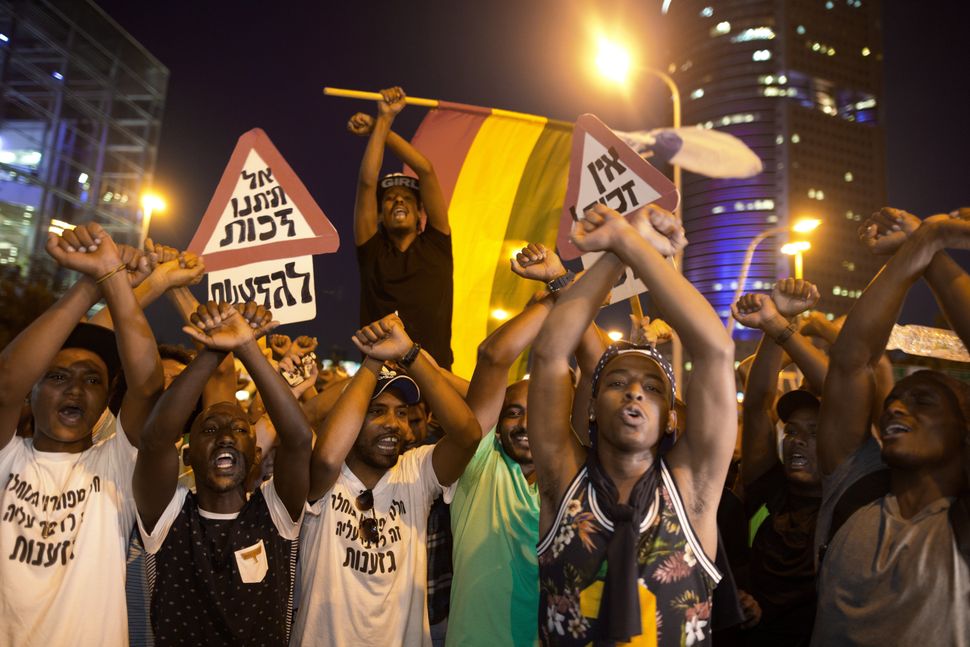 Black Israelis are backing as “historic” a new plan to put body cameras on police in hopes of reining in what they see as a pattern of abuse of ethnic Ethiopians — even though some American Black Lives Matter activists oppose the cameras.

After a series of incidents involving police and Ethiopians, including the videotaped beating of a soldier by police, the Ethiopian Israeli rights group Tebeka hailed a pilot program that aims to put cameras on thousands of cops.

“These cameras actually would do some justice,” said Fentahun Assefa-Dawit, the head of the group. “This gives a very clear picture as to how the police have behaved” during encounters between officers and civilians.

The push in the Jewish state comes even as some Black Lives Matter activists oppose body cameras int the U.S., calling them a form of “mass surveillance” against black Americans.

As of last week, 150 Israeli police officers in several Israeli cities are wearing the cameras. In the next few years, the program will be expanded to 8,000 officers nationwide.

Police cameras have been a priority for the Ethiopian rights group since last April when an Ethiopian-Israeli soldier, Damas Pakada, was arrested for attacking a police officer. But video footage captured by a civilian actually showed the police officer beating Pakada, who was then released. The incident sparked large protests in major Israeli cities — some of them violent — against police brutality toward Ethiopian-Israelis.

The police officer was suspended from the force, but the Israeli attorney general declined to charge him and cleared him of having any racial motivation in his actions. Meanwhile, Pakada has become an officer in the Israel Defense Forces.

Assefa-Dawit said that Tebeka fields dozens of calls every year from Ethiopian-Israelis, especially young men, who say they have been unfairly targeted by the police. The most common call, he said, comes from individuals who say that that they were beaten and arrested without cause.

“The youngsters would come and tell us, ‘Look we haven’t done anything wrong. We haven’t touched the police, they were the ones that beat us up.’”

Assefa-Dawit believes that the cameras will force police accountability. He also thinks that police officers will be more cautious when dealing with Ethiopian-Israelis because the officer “knows that whatever he is going to be doing is going to be recorded.”

Assefa-Dawit said that the new camera program was born out of discussions between Ethiopian-Israeli activists and the government. But police spokesman Micky Rosenfeld said the camera program was initiated long before in reaction to the proliferation of camera phones among the public.

He said the cameras are meant to capture the “police perspective” in encounters between police and civilians and also to provide a “sense of security” for both. The cameras, which are clipped to the officers’ vests, remain on throughout each officer’s shift, after which the footage is downloaded into a computer system. Rosenfeld said “as far as [he] remember[s]” the police officers cannot turn their cameras on or off.

Assefa-Dawit said he believed that police do indeed have control of the cameras’ function, but that he was convinced that police policy will prevent officers from tampering with the footage. “Nothing is 100 percent,” he said, but he believes the cameras are a step up from past protocol.

Right now, the program is focused in and around the Tel Aviv area but it will eventually be expanded to other parts of Israel and also to the occupied Palestinian territories, where border police operate.

In the United States, meanwhile, Black Lives Matter has decried the use of police body cameras, among other technology, as a way to “expand the police state” and “facilitate big profits for a growing surveillance industry” in its new platform.

The group suggests taking action on the issue by pressuring local police departments to adopt the “Civil Rights Principles on Body Worn Cameras,” which outlines specific guidelines for camera use, such as making the footage publicly available.

Another police reform campaign affiliated with Black Lives Matter, called Campaign Zero, actually advocates for body cameras for police, with a set of policy recommendations to govern their use.

Will Israeli Police Body Cameras Rein In Abuse Against Blacks?