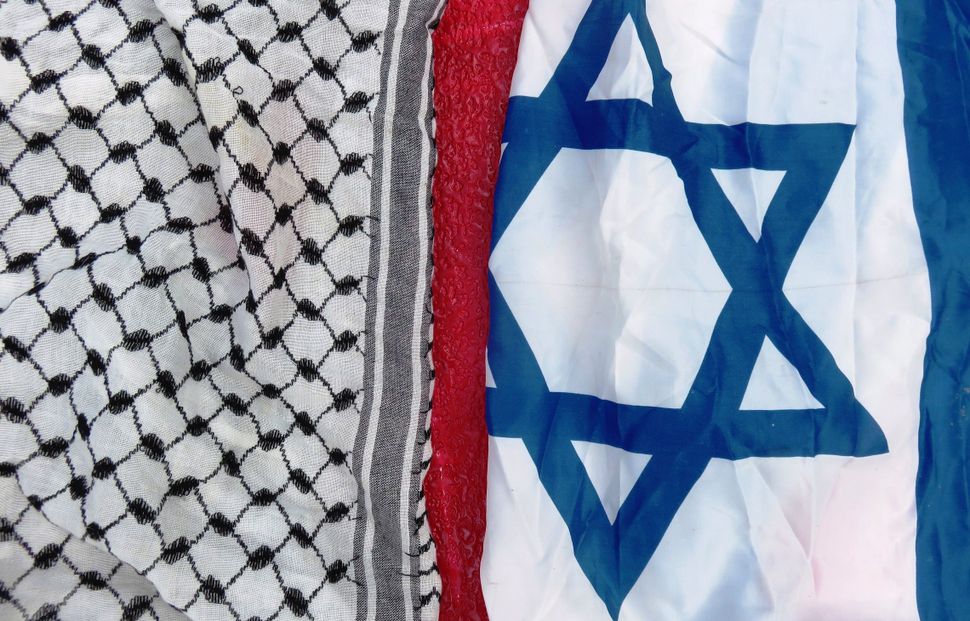 When it comes to making an emphatic point, Israeli Jews often reach for Arabic. From telling someone “Let’s go,” (“Yalla!”) to expressing surprise (“Walla!”) Arabic is a part of daily speech for Hebrew speakers.

Modern Hebrew is heavily influenced by Arabic, borrowing both words and grammar from the language. Israeli musician Meir Ariel commented on the phenomenon — and Jewish ambivalence about life in the Middle East — in his 1991 song “Shir Ke’ev”: “At the end of every sentence you say in Hebrew, sits an Arab with a [hookah]…”

Hebrew’s incorporation of Arabic — like nearly everything else in the Holy Land — has political implications. Eliezer Ben Yehuda, who spurred the 19th Hebrew revival, dubiously claimed that Arabic was rooted in ancient Hebrew. He demanded that the Hebrew Language Committee declare that Arabic’s Hebrew roots, “were ours, and had been lost, and now we have found them again,” a claim that “lacks proper historical foundation,” according to language historian Joshua Blau.

In more recent years, Arabic has been erased from street signs in parts of Israel. Despite a 2002 Supreme Court ruling to ensure that the language was included, many Tel Aviv street signs feature only Hebrew and English. Ultra nationalist vanadals in Jerusalem have graffitied over Arabic street names; in 2009 activists responded by stickering over the graffiti with Arabic calligraphy.

Yet in spite of all this, Arabic remains an integral part of the Hebrew language, particularly when it comes to slang. Guy Sharett, a Tel Aviv linguist, explained that “language has a life of its own.” “You can say whatever you want politically, there is contact here between Arabs and Jews.”

With Sharett’s help, here are five of the most common Arabic slang words used by Hebrew speakers:

Perhaps the most popular Arabic word used by Israeli Jews is “yalla.” It is an abbreviation of the Arabic phrase “Ya Allah,” which means “Oh God.” (More on this term below.)

Israeli Jews and Arabs alike use it to say “let’s go.” “’Yalla’ is used to encourage anyone to do something,” said Sharett. “Yalla, eat your soup,” or “Yalla, tell me the story.” Israelis often use yalla in combination with the English “bye.” “Yalla bye” means roughly, “Ok, gotta go.”

Israeli Jews use “Ya Allah” in the same way Americans say “Oh my god.” It’s a versatile phrase that can be used to express frustration, excitement or even shock, said Sharett: “Ya Allah I have been waiting for you for 20 minutes! You could have sent me a message!”

“Walla” is another multipurpose term, and also the name of a popular Israeli news web site. From the Arabic term “by god,” “walla” has been part of the Hebrew wordbook for decades. An Israeli might say “Walla!” to convey surprised happiness at news (“Wow!”), to which another Israeli will respond “Walla.” in confirmation (“Yes, it’s true.”).

Today, said Sharett, “walla” has become a bit “worn out” and Israelis use it the way American say “uh huh.” Riding an Israeli bus, one might overhear someone on the phone saying “walla” at intervals, just like an American would say “uh huh” to confirm he or she is still listening.

“Ala-kefak” or, sometimes “ala kef kefak,” it literally means “as you like it” but is used to convey “great” or “awesome.” You might say it in response to a friend who tells you she is going to a gathering of Israeli Arabic speakers.

“Ahlan” is a simple greeting. In Hebrew, it conveys an informal “hey,” or “hi.” In Arabic the “h” is aspirated but Hebrew speakers often just drop it.

“Fashla” Fashla means a screw-up or a failure, used roughly in the same places Americans might use “snafu.” You can just remark on a “fashla” you’ve just seen, but Hebrew speakers also use it as a verb that conjugates in a regular Hebrew way from the infinitive lefashel (“to screw up”) and verb forms like hu fi-shell (“he screwed up”).

“Fadiha,” is an Arabic word for shame. Israeli Jews say “fadiha” to remark upon an awkward or embarrassing moment. “Wow, fadiha” means “Wow, how embarrassing.” Sharett recently devoted an episode of his Streetwise Hebrew podcast to the term, noting that Israelis often use the word “fadiha” in combination with English in the phrase “Fadiha shel ha life,” or a huge embarrassment “of the life.”