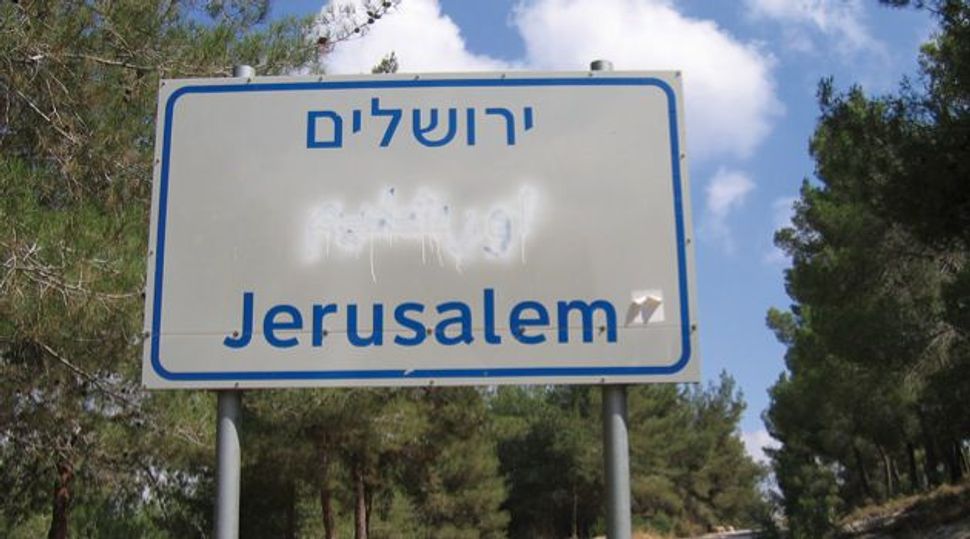 Blocked Out: A vandalized street sign in Israel that blots out Arabic. Image by Parrhesia Art Collective

In late August, a group of Knesset members from the right flank of the Likud party, Yisrael Beiteinu and the Jewish Home party proposed a bill that would make Hebrew the only official language of Israel, annulling a requirement in existence since the British Mandate period that all official documents be published in Arabic as well as in Hebrew. Similar bills to eliminate or demote the official status of Arabic were proposed in 2011 and 2008. Critics have pointed out that this bill is part of a broader effort to affirm the “Jewish” character of the state (as opposed to its democratic character) by enshrining Jewishness into Israel’s basic laws. Israeli President Reuven Rivlin, for one, has spoken out against it.

A historical perspective is worth adding to the discussion, one that highlights a contradictory Zionist view of language that has existed since the British ruled Palestine: As Zionists advocated forcefully for the very principle of national language rights, they fantasized about a society in which there would be no national competitors to Hebrew. Israel still is navigating between these two positions.

The very British Mandate-era law that the bill’s promoters now want to overturn was one for which Zionists themselves (more than any other group) strongly advocated. Given the demographics of Palestine, it was established that Arabic would be deemed an official language by the British; less straightforward was the supposition that Hebrew should be given that status as well. After all, Hebrew was nominally the language of only 8% of the population when the British arrived, and in practice it was not even the dominant language among that Jewish population that claimed it as their own. The British rationale for recognizing Hebrew as well as Arabic was their understanding of Palestine as being the home of two nations, each of which had a national language.

Zionist activists were quick to remind the British of those language rights at any point when the official regulation, first promulgated in 1920, seemed to be violated. Frederick Kisch, head of the Zionist Executive in Jerusalem, called attention in 1923 to the language situation of Jewish settlements in the Beit She’an Valley region, arguing that although the 792 Jews in that area were far below the 20% threshold for Hebrew to be deemed official, he asked that the government nonetheless accede to the demands of “villages of Jews who can’t use any other language but Hebrew.”

To justify the Knesset bill, its sponsors point to international norms. As Shimon Ohayon, the main organizer of the proposal, put it, “In most countries around the world the language of the country is the language spoken by the majority of the population,” suggesting that such a policy “contribute[s] to social solidarity.” Indeed, countries with a unifying civic nationalism, such as France, ensured since early days that the national language was energetically spread to the far corners of the country (and that regional languages were demoted to secondary status in the process), out of the assumption that national belonging was premised on language unity. But Israel, understanding itself as a Jewish state, has never assumed that every citizen is an equal member of the nation — this is the reason why current citizenship policy makes a strict division between “Jewish” or “Arab“ and the high court has invalidated demands that nationality be listed as, simply, “Israeli.”

Zionists were comfortable vocally and persistently demanding their language rights as a national minority in Mandate Palestine — but did not often consider openly what sort of language policies they would put into place if and when they received independence, or if they should become a majority. If anything, the working assumption seemed to be that they would have little tolerance for languages other than their own. The Tel Aviv municipality would regularly castigate those who wrote letters in languages other than Hebrew, reminding them that they should treat the municipality like any monolingual country. For example, the city hall’s reply to a Mr. Fritz Epstein in March 1940 stated, in response to a routine request for municipal services sent in German, that he needed to write in Hebrew. “It seems to me that we are allowed to demand of you that you behave with the same courtesy that you would show in any place where you lived outside your homeland” — in other words, that he use the single sole language of the Jewish country-in-the-making.

These prestate institutions were “play-acting” language sovereignty despite their minority and insecure status. Their sense of insecurity was warranted in the prestate period; today it appears as a more anachronistic mode of thinking that reveals an inability to cease feeling like a minority despite demonstrable Israeli Jewish national strength. Ohayon is the head of the Knesset “lobbying group for the promotion of Hebrew.” This group, in its name and mission, is reminiscent of a series of pro-Hebrew advocacy groups that emerged during the 1920s, ’30s and ’40s, with names such as “The Union for the Imposition [hashlatah] of Hebrew,” and “the Central Commission for the Imposition of Hebrew,” which continually reminded the British of their language obligations, and reminded fellow Jews of the need to speak only Hebrew, lest they succumb to the more numerous or more prestigious languages around them.

These campaigns did have the effect of progressively turning Hebrew into the dominant spoken language among Jews. With Israel’s independence in 1948, it seemed to some that the need for strident language activism was waning, as Hebrew had by that point become well-rooted and Jewish immigrant languages were indeed being replaced by Hebrew.

But if Hebrew had successfully exercised the capacity to displace Jewish mother tongues, Arabic was the linguistic bedrock of Palestine that Hebrew could not displace. The fantasy of the mandate-era Tel Aviv municipality could not be wholly put into practice. The Israeli state, operating from a position of demographic strength after displacing the majority of Palestinian Arabs in 1948, thus adopted the liberal strategy of granting nationality rights (as well as a degree of educational, legal and linguistic autonomy) to the Palestinian Arab minority. In doing so, they followed in the footsteps of the British. An increasingly vocal group, however, continues to see this minority as an unacceptable threat, to see Hebrew (as well as the state’s Jewishness) as embattled and on the defensive and Jewish exclusivity as the only recipe for a strong country.

Thus, in addition to ignoring and overlooking one-fifth of the population and creating distance between Jewish and Arab citizens, as critics have noted, the bill inverts the very principle that Zionists themselves tirelessly advocated for decades before statehood: that a numerically significant group with a discernible and unified national culture should be granted national language rights, even if, and precisely because, it is a minority.

Liora R. Halperin is an assistant professor of history and Jewish studies at the University of Colorado, Boulder. Her first book, “Babel in Zion: Jews, Nationalism, and Language Diversity in Palestine, 1920–1948,” will be published by Yale University Press in November.