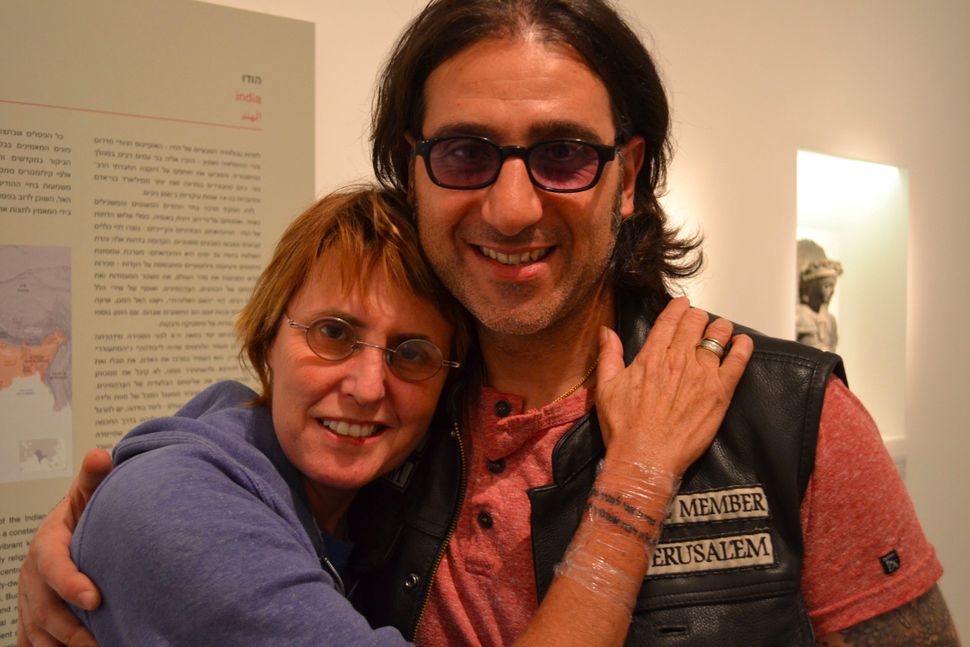 Six years ago, Kay Wilson was nearly stabbed to death by two Palestinians in the forest outside Jerusalem. Now a pro-Israel activist, she is marking her survival with a tattoo by a Palestinian artist.

Wilson was tattooed by Wissam Razzouk, owner of the legendary Razzouk Ink in Jerusalem’s Old City as part of a new project called “Healing Ink,” which uses tattooing to help Israeli victims of terrorism and war overcome trauma.

Her new tattoo, on her right wrist, is the Hebrew prayer “Modeh ani,” said upon waking: “I give thanks to you oh living and eternal King that in your great compassion you restored my very breath. Great is your faithfulness.”

It also has three Stars of David, which remind her of the Star of David necklace she was wearing during the attack — before her assailant removed it and stabbed her in the spot where it had been.

“I caused her pain,” Razzouk said. “It was done for a good reason — to remember she was a survivor.” 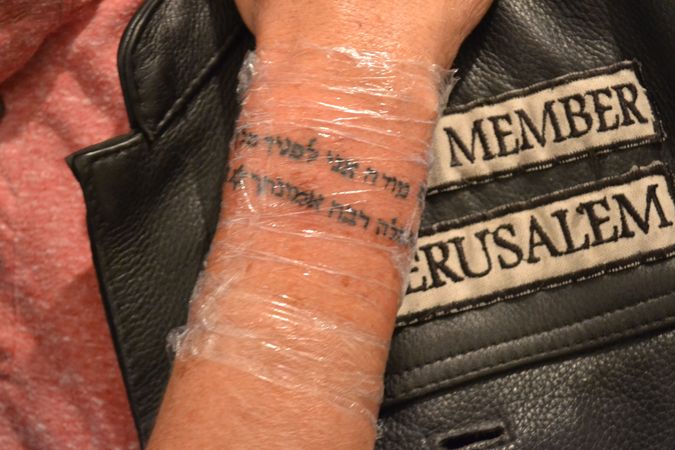 Wilson and Razzouk were paired by the project organizers at an event at the Israel Museum, where eight tattoo artists inked Israelis in an attempt to heal both physical and psychological scars amid the museum’s ancient sculptures. Razzouk was the only Arab tattoo artist at the event.

To be sure, Jewish law forbids tattoos. Rabbis say the source of the prohibition is in the Hebrew Bible: “You shall not make gashes in your flesh for the dead, or incise any marks on yourselves: I am the Lord.” [Leviticus 19:28] The communal taboo surrounding tattoos intensified in the aftermath of World War II, during which Nazis inked concentration camp prisoners’s arms with identification numbers.

But secular and less religious Jews famously flout this rule these days, when tattoos are terribly trendy. There’s even a Facebook page devoted to Tattooed Jews, featuring notables like actress Sarah Michelle Gellar and musician Lenny Kravitz flaunting their ink in various states of slinky undress.

Wilson, a London-born Jew who immigrated to Israel in 1991, said the religious prohibition on tattoos wasn’t a concern for her. She called herself “spiritual,” but says she doesn’t follow Jewish law closely. She has another tattoo, a bird, on her ankle.

Wilson said that her new tattoo will be a reminder to be optimistic, which is a daily challenge. She lives with chronic pain from the attack, and even breathing is uncomfortable.

The Healing Ink project sees ink as a way to externalize pain.

Wilson had been stabbed, Razzouk reflected, noting that he too was “stabbing” her with a needle — but this time in order to help her heal. He said tattoos are a way to express inner feelings on the outside. “Yes, it is healing.”

Though Wilson and Razzouk didn’t seek each other out, they both acknowledged the power in their pairing as a Jew and an Arab. Razzouk said that many Israelis call his shop to make appointments, but never follow through once they find out that he is an Arab. But Wilson said that she was “delighted” to be inked by Razzouk, finding symbolism in it.

Sitting underneath a statue of Buddha, Razzouk tenderly held Wilson’s wrist as the two talked about Wilson’s new ink.

Wilson said that getting the tattoo from Razzouk was a “powerful form of relating,” and a way to demonstrate that she doesn’t hold ill will toward Arabs in general because of what happened to her.

“It does make it more special that I am an Arab and she is an Israeli,” said Razzouk, who said he related to Wilson “as a human being toward another human being.”

Wilson was hiking with her friend, an American Christian tourist Kristine Luken, in a forest near Beit Shemesh in December 2010 when the pair were attacked by two Palestinians men wielding large knives.

Wilson watched her friend get hacked to death, and then played dead as she was stabbed repeatedly. After the attackers left her for dead, she got up and walked almost a mile to a parking lot, where a family there called the authorities.

Since then, Wilson has become a prominent pro-Israel commentator, representing the right wing group Stand With Us and agitating to get international funding cut from the Palestinian Authority, which she believes incites Palestinians to violence. She said that she has not forgiven her attackers. “I don’t love my enemies. My anger and my loss have to be directed in a legal way.”

Wilson said that the fact that Razzouk is a Palestinian Christian resonated with her since Luken was also a Christian.

Razzouk’s tattoo shop is thought to be one of the oldest continuously operating tattoo parlors in the world, marking Christian pilgrims for the last 700 years with traditional Christian symbols.

He said that he lives by the Christian bible verse “love they neighbor.”