Down to the Dog Whistles, Donald Trump’s Jerusalem Rally Could Have Happened in Idaho 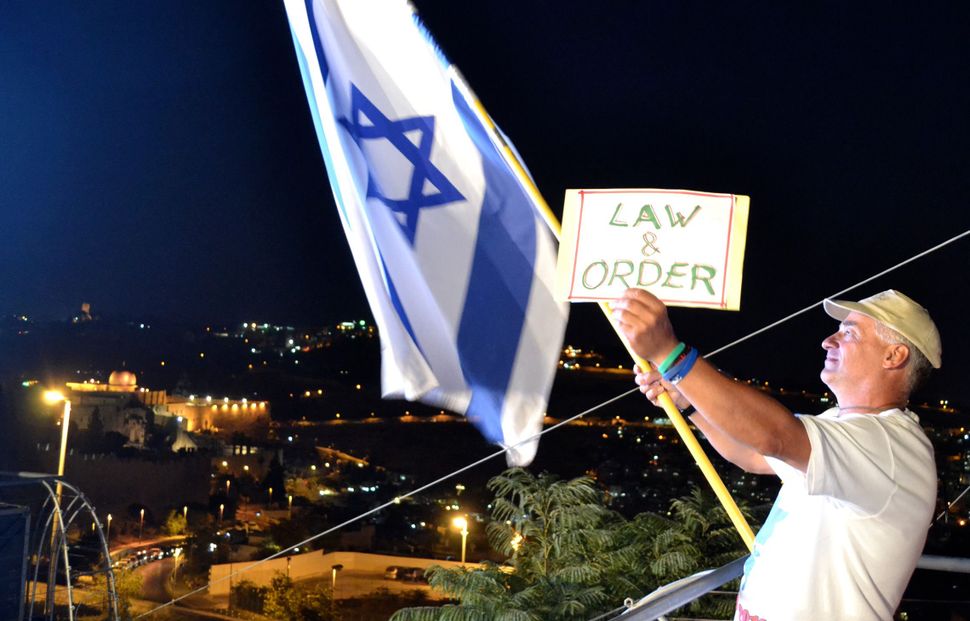 The event had the hallmarks of a classic Donald Trump rally. Supporters wearing “Make American Great Again” hats shouted “Lock her up,” in reference to Hillary Clinton, “Drain the swamp” and “Trump, Trump, Trump.”

But instead of say, Idaho, where Trump has a double-digit lead in the polls, this rally took place in the holy city of Jerusalem with a pre-recorded video address by the candidate. And instead of Trump’s typical white Christian voters, these were for the most part older Orthodox Jews.

“I love Israel and honor and respect the Jewish tradition and it’s important we have a president who feels the same way,” said Trump, as fans scrambled to catch the one-minute address on their camera phones.

Over the course of two Obama administrations, an important segment of American Jews has made Israel its primary political issue and taken its cues on the American president from an Israel that despised him for the Iran deal and for his criticism of the country’s settlement project. The current Republican candidate has invested heavily in his Israel operation in an attempt to rally absentee voters and to whip up feelings against the Democratic nominee at home. But so far, the return seems unlikely to meet expectations.

Rather than the “major campaign rally” as organizers had promised in a press release, Wednesday night’s event was a modest affair attended mostly by volunteers and activists. Organizers said that 350 people attended the bash, but the rooftop pavilion looked like it wasn’t at total capacity, with at least two dozen seats empty.

Polling in the swing state of Florida shows that Clinton has a 66% lead among Jewish Floridians. And while Trump still leads among Orthodox Jews in the Sunshine State, anecdotally, at least, many appear to be supporting the incendiary candidate only on the down low. Clinton also leads polls in states with the biggest Jewish populations: New York, California, Maryland and even Pennsylvania, where the race is tighter.

But in Israel, like in the United States, those who do support Trump — Jewish or not — tend to do so loudly.

The Trump faithful in attendance spared no words for Clinton. Ron Hoffman, carrying a massive Israeli flag and a sign with the words “LAW & ORDER” on one side and “DRAIN THE SWAMP” on the flip, said that Clinton was “supposed to be in jail.”

Though he can’t vote in the American election, Hoffman said he was there to show Israeli support for the Republican nominee. He admitted that Trump was an “unknown,” but considered him a better alternative. “I’d rather get on an unknown ship than a crooked ship that is going to sink.”

Yet Trump fans at the Harp of David restaurant said, just like his American supporters, that they didn’t buy the data predicting a Trump implosion on election day.

“I don’t trust the polls,” said David Weissman, a 35-year-old American-Israel wearing a matching Trump/Pence T-shirt and hat; he said he has worn the hat every day of election season. He said he had heard many stories about the possibility that the election would be “rigged” against Trump. “I still think in the end he will win.” 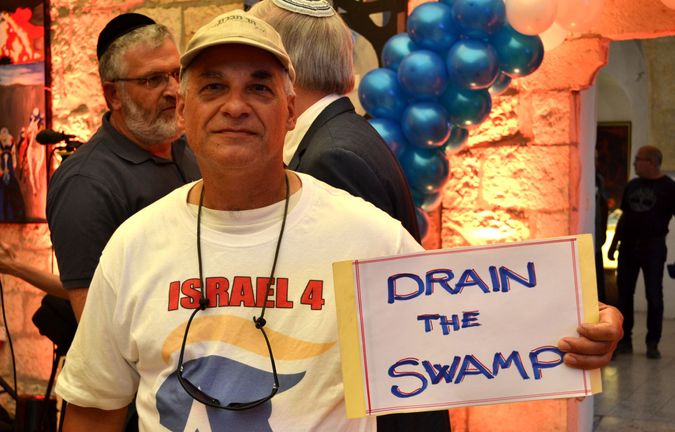 Ron Hoffman said he came to the event to show Israeli support for Trump. Image by Naomi Zeveloff

Danielle Yager, a 19-year-old American-Israeli from Ceasarea traveled two hours with her parents, both Trump backers, to attend the event. Wearing a “Make American Great Again” hat and sparkly charm bracelets, she said liked Trump for his “integrity.” “He’s honest and he’s transparent,” she said of the candidate who, by one journalist’s count, lied 34 times compared to Clinton’s four at the final presidential debate.

“I can’t believe the polls,” she continued, when asked about a probable Trump defeat. She too raised the specter of a “rigged election.” “On Saturday I met two women who grew up in Communist Russia, and they said it’s similar to what’s going on there.” She said Trump “shouldn’t commit” to the election results.

The guests snacked on grapes, pickles and puff pastries in the main event hall before heading upstairs to the rooftop pavilion hung with Israeli and American flags. A sweeping view of the Old City and East Jerusalem provided a dramatic backdrop to the stage, which was lit by an electronic billboard that said “Jerusalem forever.”

In Trump’s brief video address, the candidate said that Israel and America would together stand up against common “enemies” like Iran. “Together we will make America and Israel safe again,” he promised. 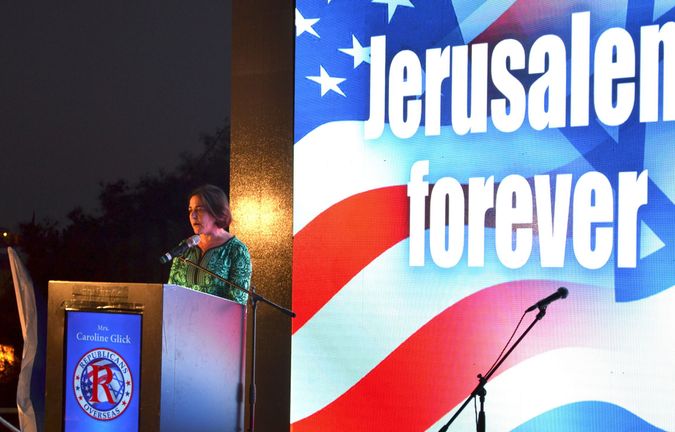 After the video ran, Trump’s Israel advisor, David Friedman, fleshed out Trump’s commitment to Israel in a longer address, saying that there will be “no daylight” between America and Israel in a Trump presidency. He painted a future in which Israel is “no longer a client state to be directed what to do and not to do” by the Americans, but a “full partner in the global war on Islamic terrorism.”

“A Trump administration will never pressure Israel into a two state solution or any other solution that is against the wishes of the Israeli people,” he said.

And that’s where the dog whistles came in. In the second debate, Trump sought to emphasize Clinton’s associations to despised public figures with distinctively Jewish names, like George Soros and Sidney Blumenthal. In this way, hate speech experts said, he signaled to white supremacists that he was on their side in opposing what they see as pernicious international Jewish institutions like banks and political alliances.

Friedman did likewise, and his Jewish audience responded appreciatively.

“At this extremely holy site I am almost reconsidering mentioning the name of Hillary Clinton,” he said, as the audience booed. He detailed what he described as Clinton’s anti-Israel record. What’s more, he said, Clinton is surrounded by anti-Israel “friends.”

“Who does Hillary Clinton get her advice from?”

The audience offered suggestions. “George Soros?” Friedman said. “Good, good.” “Sidney Blumenthal,” he continued naming a close confidante to Clinton. Next he mentioned Max Blumenthal — Sidney Blumenthal’s son whom Clinton has actually denounced — calling him “one of the most vile anti-Israel haters on the face of the earth.” 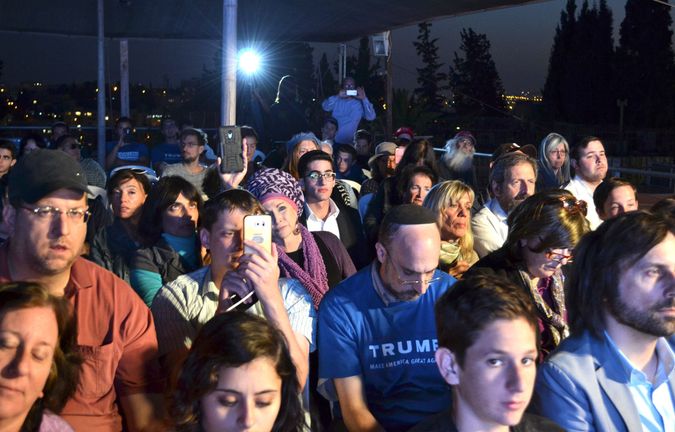 Trump supporters at the Jerusalem rally. Image by Naomi Zeveloff

A few people suggested Huma Abedin, a top Clinton aide. “Huma Abedin grew up in Saudi Arabia,” he said, omitting that she was born in Michigan. She has “close connections to the Muslim Brotherhood,” he said, repeating a common charge on the pro-Trump right that the Washington Post determined “doesn’t pass the laugh test.”

Then Friedman went even further, confirming one audience member’s suggestion that Abedin was linked to Al Qaeda, another right-wing conspiracy theory.

Another speaker, Caroline Glick, a right-wing Jerusalem Post columnist and one of the most anticipated acts of the night, focused her words on U.S. President Barack Obama, naming his “consistent hostility toward Israel” when it comes to building in West Bank and East Jerusalem settlements.

“We know that one of the people running for office, for the highest office to replace Obama in just two weeks, Hillary Clinton, was a full partner in these policies,” said Glick before she was interrupted by booing from the audience.

“Hillary for prison!” one man said.

Down to the Dog Whistles, Donald Trump’s Jerusalem Rally Could Have Happened in Idaho