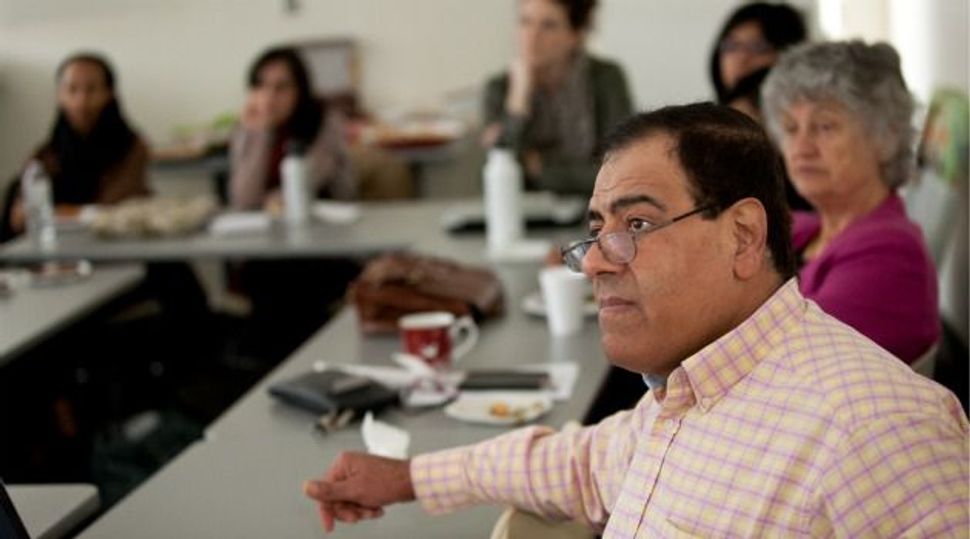 Starting Over: ?Gaza Doctor? Izzeldin Abuelaish lost three daughters to Israeli shelling. Now he is building a new life in Toronto, where he teaches public health. Image by nick kozak

Israeli President Reuven Rivlin received a stark diagnosis on the Israeli-Palestinian conflict on Wednesday from a Gaza doctor.

“Israelis are sick with the disease of fear because of their history and narrative,” Izzeldin Abuelaish, a Toronto-based doctor from Gaza told Rivlin, according to Israeli news site Ynet. “The Palestinians are sick with the disease of the occupation. How can we grow stronger, proudly live together side by side? What concerns me is that instead of us being closer to one another we are moving further away.”

Abuelaish, whose three daughters were killed in Israeli shelling in Gaza in 2009, visited the Israeli president as part of a Canadian delegation this week with Governor General of Canada David Johnston.

Abuelaish said that Israelis and Palestinians were like a patient scared to get surgery, not knowing that it would ultimately lead to a better outcome.

“Normally a sick person insist that he won’t undergo surgery but after he has done so he is healed. Why not do this today to save more blood? The price is high. Every one of us suffers from (the conflict) and time is running out. Life is short. God created us to live. We have a responsibility to our children,” he said.

Abuelaish also lamented the fact that he would not be able to visit his daughters’ graves in Gaza because of Israeli restrictions.

“I hurts me to arrive in the State of Israel and not be able to get to Gaza in order to visit the graves of my daughters, not only because of the shortage of time but also because I need permission and because of the checkpoints here. We need to build bridges between the people, not checkpoints,” he said.

Abuelaish, a professor health at the University of Toronto, is a well-known peace activist whose book “I Shall Not Hate,” describes his decision to preach reconciliation after his daughters were killed.

He was the first Palestinian doctor to work on staff at an Israeli hospital and was a researcher at the Sheba Hospital in Tel Aviv just before the 2008-2009 war between Israel and Hamas.

He created the Daughters for Life foundation in memory of this three daughters, which supports young women in the Palestinian Territories, Israel, Lebanon, Jordan, Egypt and Syria to pursue higher education.