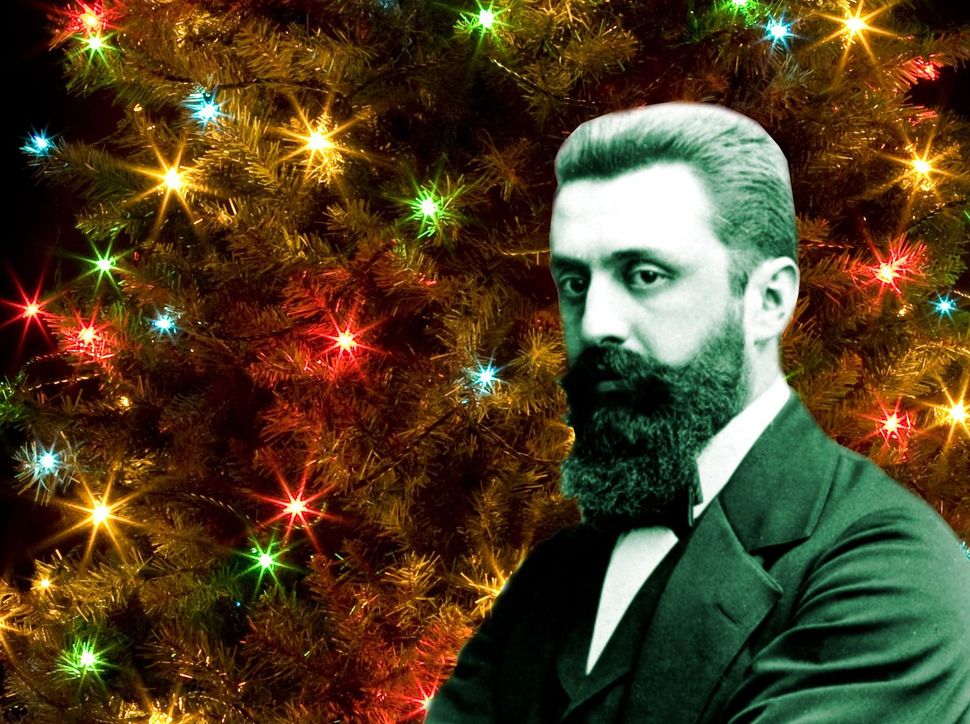 Natalie Portman made headlines this month when she told the host of “The Tonight Show,” Jimmy Fallon, that she would be decorating her home with a Christmas tree for the first time this year, thus fulfilling “every Jew’s secret wish.”

But Portman is far from the first high-profile Jew to deck the halls. In fact, Theodor Herzl, Zionism’s founding father, once had a Christmas tree in his home in Vienna.

Historians know about Herzl’s Christmas tree because he wrote about an incident regarding the tree in his diary. It was on December 24, 1895, when an important Viennese rabbi, Moritz Güdemann, came to his home as Herzl, then 35, was “lighting the Christmas tree for my children.” Güdemann was apparently displeased with what he saw. Herzl wrote:

[Güdemann] seemed upset by the “Christian custom.” Well, I will not let myself be pressured! But I don’t mind if they call it the Hanukkah tree — or the winter solstice.

Herzl’s defense of the Christmas tree as a symbol that transcended Christianity was likely an opinion shared by many Viennese Jews. According to Steven Aschheim, a former professor of history at Hebrew University, liberal Viennese and German Jews commonly decorated for Christmas. These Jews weren’t denying their Judaism; they were staking a claim in mainstream Christian society.

The Christmas tree “was a way of participating, and not feeling outside,” Aschheim said.

Christmas trees, in fact, were an important signifier for middle- and upper-class Viennese, whether Christian or Jewish. According to the World of Habsburgs website, an interactive history of the Austrian Habsburg Dynasty, the Christmas tree tradition “came to epitomize a pious sense of family and bourgeois domesticity.”

The first recorded mention of a Christmas tree in Vienna was actually in the home of a wealthy Jewish family, according to the World of Habsburgs. An 1814 report compiled by the state police references the tree in the salon of the Arnsteins, a family of Jewish bankers. Apparently, Fanny von Arnstein had brought the Christmas tree custom to Vienna from her native Berlin.

At the time of Herzl’s Christmas tree incident, he was in the midst of writing “Der Judenstaat” (“The State of the Jews”). His treatise, published in 1896, said that Jewish attempts at assimilation in Europe were futile. Though Jews were largely acculturated in Vienna, they were still barred from public office, leading many to convert to Christianity.

Herzl believed that anti-Semitism was incurable, and that Jews should establish their own nation state. That state, in his view, would be avowedly secular — a place, perhaps, where one could light a Christmas tree and still be called Jewish.

“His view of the future Jewish state, which he didn’t call Israel, was more accurately a state of the Jews,” said Avner Falk, whose 1993 book “Herzl, King of the Jews,” paints a psychological portrait of the Zionist thinker. “He wanted a total separation of religion from the state; no religious coercion, everyone could choose his religious beliefs and practices.”

This idea was unpalatable to many Jewish religious leaders at the time. Güdemann, who officiated Herzl’s wedding and with whom Herzl had a long, contentious back-and-forth, took the Christmas tree to symbolize Herzl’s secular vision. Güdemann also wrote about the incident in his diary, according to Ernst Pawl’s 1992 book “Labyrinth of Exile”:

From the very outset, one of Guedemann’s (sic) chief objections to Herzlian Zionism was its lack of a religious foundation, and in his memoirs he recalls with purse-lipped disapproval how he had dropped in on the Herzl family one afternoon in late December only to find them gathered around the Christmas tree in the parlor.

Herzl’s vision for a Jewish state did, of course, come to pass, but it hasn’t always been inclusive of the Christmas tree. Last year, a group of right-wing activists with the anti-assimilation Lehava group protested outside the Jerusalem YMCA, claiming that a Christmas tree decorating event was targeted at Jews and not Christians because of its Hebrew advertisements.

“Jews want a hanukiah, not a fir tree,” they shouted, referring to the Jewish candelabra used on Hanukkah.

The protesters likely had no idea that Zionism’s founding father himself delighted in “lighting” just such a tree.