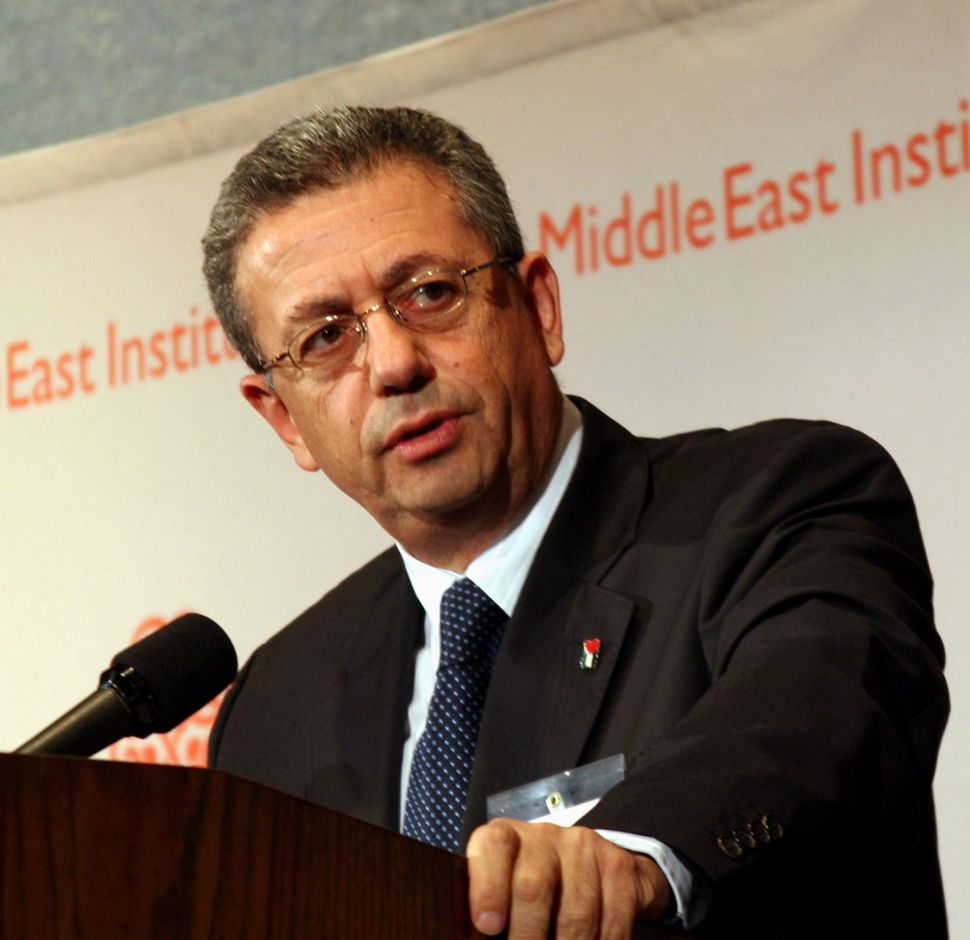 Palestinian official Mustafa Barghouti said Wednesday he was “proud” of Jews who support the movement to boycott Israel.

“I am so proud of the fact that many international activists from the BDS movement” — the movement to boycott, divest from and sanction Israel — “are Jewish activists who themselves believe … this Israeli government policy is very dangerous to the future of their people as well,” he said.

Barghouti, a member of the Palestine Liberation Organization’s Central Council, made his comments at a PLO briefing for foreign correspondents at the Orthodox Club in the West Bank town of Beit Jala. As journalists ate a dinner of spiced beef with rice and almonds, Barghouti stood in front of a twinkling Christmas tree and struck a notably dismal tone.

About an hour earlier, Egypt had indefinitely postponed a resolution it had planned to introduce in the United Nations Security Council that would have condemned Israel’s settlement building in strong terms. According to news reports, Egypt pulled the resolution amid pressure from Israeli Prime Minister Benjamin Netanyahu and U.S. President-elect Donald Trump.

“I don’t think this will be the end of the story,” Barghouti said vaguely. “I hope in the coming two or three days things will change.”

Barghouti warned that Trump’s presidency could signal the end of the United States as a broker for Mideast peace if Trump puts his thumb on the scale for the Israelis as he has promised to do.

Trump has vowed to move the American embassy to Jerusalem from Tel Aviv in a move opposed by the international community. His pick for Israel envoy, David Friedman, supports Israel’s annexation of parts of the West Bank and raises funds for Israeli settlements built on lands Palestinians eye for a future state.

“The United States cannot be participating in any peace process, cannot be a host or an impartial partner in any process,” Barghouti said. “Because that level of bias in my opinion will prevent the United States from being able to play in a role in any future process.”

Barghouti said the Palestinians will have to look for “alternatives” to a negotiated solution in the Trump era. He suggested joining the World Health Organization, where the PLO is currently limited to observer status.

But he also hinted that Trump might not be an active player in Israeli-Palestinian affairs.

“I think some Israelis have to think seriously about what they have wished for,” he said. “I don’t see that Mr. Trump has a very big interest in facilitating a bigger role of the United States in the Middle East. I think his policies are linked to an isolationist approach.”

He said that some Palestinians were “raising a question” about whether the official Palestinian line on the two state solution was “worthy to keep talking about” given the political realities. He noted that this comment was not an “official” Palestinian position, but his perspective on the ground.

He ended his address turning back to BDS as part of the Palestinian national campaign. “I do believe that we should continue this struggle,” he said. “We should be not be shy about our goals.”