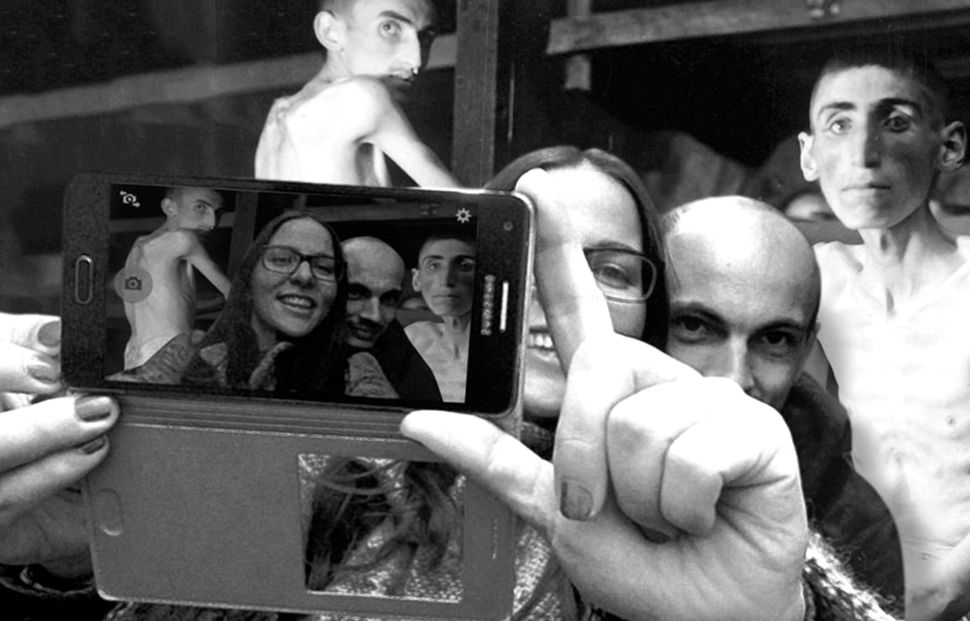 A Berlin-based Israeli artist has created a jarring online visual critique of tourists who take selfies at the Berlin Holocaust Memorial.

YOLOCAUST, a combination of the acronym “YOLO,” which stands for “you only live once” and the word “Holocaust,” juxtaposes selfies at the Berlin outdoor monument with photographs of Nazi death camps.

In one photo, a man juggles pink balls while kneeling amid the grey concrete slabs at the memorial. Hovering a cursor over the photo, the backdrop transforms into a photograph of a black and white trench where soldiers heap soil onto naked dead bodies. In another, a couple taking a selfie transforms to include two emaciated prisoners.

YOLOCAUST is a project of Shahak Shapira, a 28-year-old Israeli satirist and author who lives in Berlin. According to the web site, the selfies are real photographs found on Facebook, Instagram, and the dating web sites Tinder and Grindr.

The selfies were taken from social media sites without permission from Shapira, who includes an email address (undouchme@yolocaust.de) where the original posters can write to have their photographs removed from the project.

In an interview with the Guardian, Shapira said that he wanted to push people to think deeply about how they should be commemorating the Holocaust.

“Berlin’s Holocaust memorial isn’t there for the Jews, or even the victims – it’s a moral compass for future generations, to warn them precisely about people such as Björn Höcke,” the populist German politician who recently said that Germany should stop atoning for Nazi crimes.

“Germans are the only people in the world who plant a monument of shame in the heart of the capital,” he said.

Other satirists have criticized the trend of playful tourist selfies at Holocaust memorials. A now-shuttered Israeli Facebook page, With My Besties At Auschwitz, republished pictures of teenagers posing at Auschwitz, the site of the German-operated Nazi death camp in Poland.

In the case of the Berlin memorial, the site’s American architect Peter Eisenman, predicted that the monument would be used for a range of purposes, not just mourning and remembering.

“People are going to picnic in the field. Children will play tag in the field”, Eisenman told German newspaper Der Spiegel in 2005. “There will be fashion models modelling there and films will be shot there. I can easily imagine some spy shoot ’em ups ending in the field. What can I say? It’s not a sacred place.”