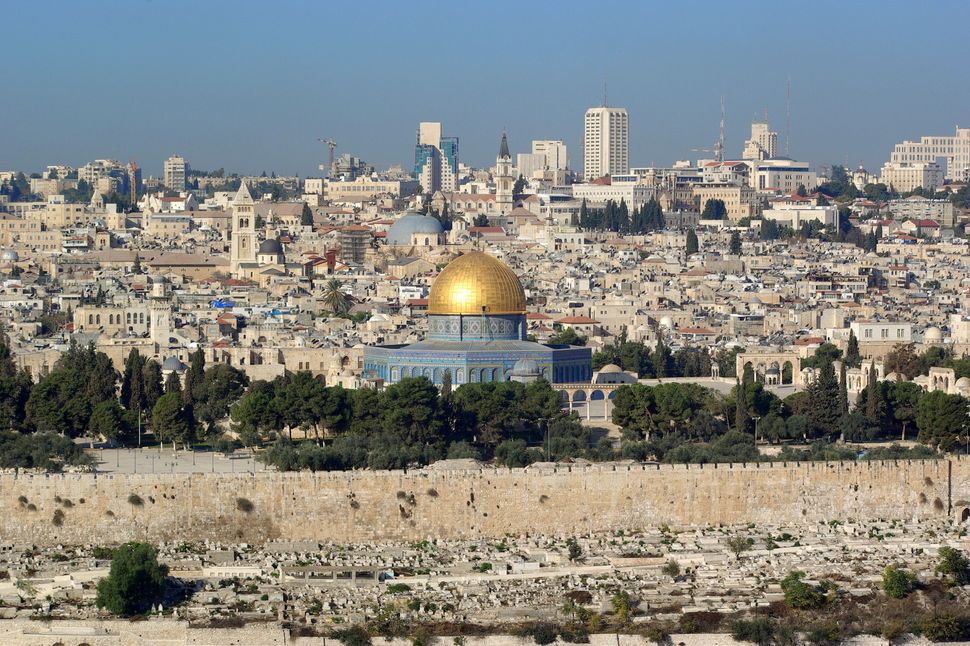 (JTA) — In his second media interview as president, Donald Trump said it was too early to discuss moving the U.S. embassy to Jerusalem and praised Israel’s separation barrier as effective at providing protection.

“The wall is necessary,” Trump said in replying Thursday to a question by Fox News’ Sean Hannity about Trump’s plan to erect a wall along the U.S. border with Mexico. “That’s not just politics, and yet it is good for the heart of the nation because people want protection and a wall protects. All you’ve got to do is ask Israel.”

The Israeli barrier, which is mostly made up of fences, was erected after 2002 to prevent the recurrence of repeated suicide and other attacks by Palestinian terrorists during the second intifada. Trump said he wants to build the U.S.-Mexico wall to prevent smuggling and illegal immigration, which in 2015 the Department of Homeland Security estimated was occurring at a rate of 170,000 crossings annually from Mexico into the United States.

Asked about moving the embassy, a move he said he favored during the campaign, Trump said: “I don’t want to talk about it yet. It’s too early.”

Congress in 1995 passed a law mandating a move to Jerusalem, but allowed presidents to waive it every six months for national security reasons; successive presidents have done so. Trump would need to issue a waiver by the end of May if he chooses not to move the embassy.

The Palestinian leadership has said in recent days that an embassy move could bury any vestiges of the peace process, which Trump has said he would like to advance. Jordan, a close U.S. ally, has also warned that the move could destabilize the region.

Separately, Secretary of Defense Jim Mattis on Thursday called his Israeli counterpart Avigdor Liberman to “underscore his unwavering commitment to Israel’s security,” a Pentagon spokesperson said in a statement. Mattis intends to “advance the U.S.-Israeli defense relationship and to protect Israel’s qualitative military edge,” the statement read. Liberman said he was also committed to achieving these goals together with the United States.

During the Fox News interview, Trump defended his intention to issue executive orders suspending the United States’ refugee program and halting the issuing of visas to citizens of certain countries.

“Right now, the FBI has over 1,000 [terrorism] investigations going on … and these are people that we let in. We don’t need this. Some people have come in with evil intentions. Most haven’t, I guess, but we can’t take chances,” Trump said.

He also said that the healthcare system following former president Barack Obama’s reform, known as Obamacare, “is a total horror show, it doesn’t work” and that Trump will come up with a better one.