Israeli Leading Research Into Pot As Palliative for Autism 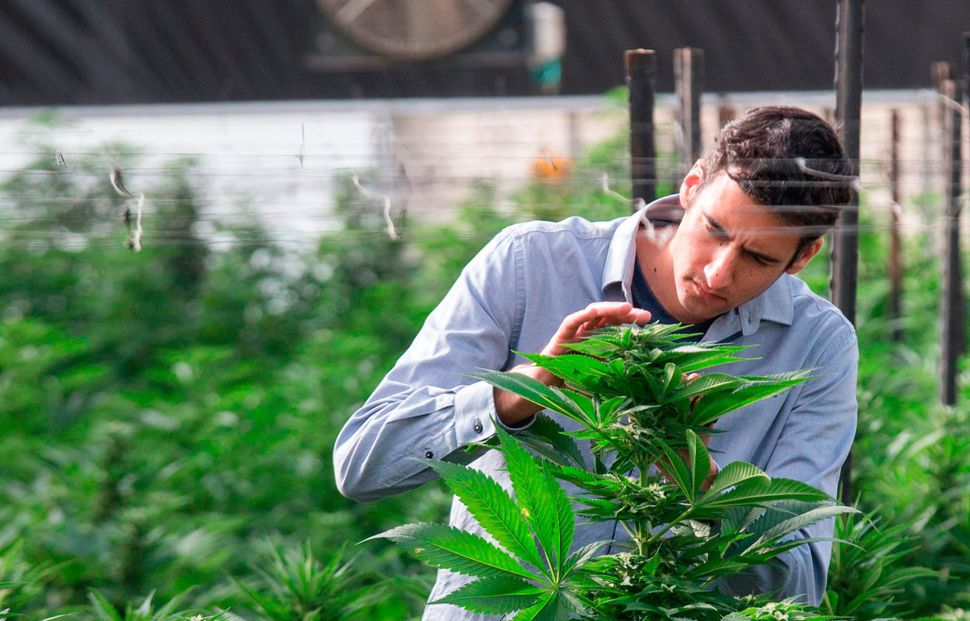 One night not long ago, Sharon’s nine-year-old son Yehuda was crying. But Yehuda couldn’t tell her what was wrong because he doesn’t speak — he has autism — and so he grew anxious.

Finally, he used an iPad app for autistic children to indicate that he wanted to go to sleep. But in the future, Sharon hopes she can avoid moments like these. She is trying a new medication for her son — marijuana — that she believes might help ease his anxiety when it comes to communicating.

A social skills instructor living in Modiin, a town halfway between Jerusalem and Tel Aviv, Sharon said she knows the marijuana won’t cure her son, but she thinks it may make such interactions easier, allowing him to communicate with less frustration.

“Medical cannabis could maybe… allow him more room to be calmer,” she said. “It’s that sense of calm we all crave in life.”

Yehuda, whose parents asked to omit his last named for privacy reasons, is part of the first-ever formal study on the use of medical marijuana in treating autism. The study, which is taking place in Jerusalem at Shaare Zedek Medical Center after some preliminary research, is looking at whether medical marijuana can alleviate certain ailments associated with autism.

As a longtime global leader in medical marijuana research, Israel can try to help Yehuda and other autistic children like no other country can. Parents like Yehuda’s see the drug’s potential to ameliorate the debilitating anxiety autism can cause, and its ability to soften the urge to hurt themselves that can sometimes afflict children with autism. They are scrambling to take part in the study, and to take advantage of their nation’s attitude toward the herb, which is tolerant and pragmatic where America’s is judgmental and censorious.

Israeli research on medical marijuana is a feather in the cap for the country that’s known as a “startup nation” for its disproportionate number of small companies that have achieved global advances in such fields as internet technology and medicine. It’s even a point of pride for some parents involved in the study, like Sharon, who said she is thrilled that the country she immigrated to 12 years ago from the United States is now leading the study that may help her son.

When Yehuda was 2.5 years old, he began to withdraw, into himself and away from his parents. He stopped speaking and started playing alone. He was diagnosed with autism, sending his parents on a quest to help their son that involved specialized schooling, therapy and medication.

Adi Aran, the pediatric neurologist leading the study, said that the impetus for the research actually came from the parents of his autistic patients, who asked him to begin looking into medical marijuana as an option for treating their children. Some of these patients had had success using medical marijuana to treat epilepsy, a seizure disorder. Many of these patients had “tried everything” to treat autism, Aran said, from gluten-free and casein-free diets to oxygen therapy, to more traditional approaches like anti-psychotic medication.

Aran initially turned down the pleading parents of his patients because of the lack of medical evidence that marijuana works in autism cases. But seeing their desperation, he eventually relented and asked the Ministry of Health to give him permission to administer marijuana to certain patients. He started an observational study — the precursor to the clinical trial underway now — with 70 patients, and found that about a quarter of them improved dramatically, another quarter improved and about half did not improve. The results of this study will be published in the coming months.

Aran’s experience contrasts sharply with that of American scientists, who face a daunting legal and regulatory labyrinth should they try to study marijuana, because it is classified as a “Schedule 1” narcotic. Indeed, back in the 1960s America’s National Institutes of Health rejected an early grant application from the Israeli scientist Raphael Mechoulam, a Bulgarian-born organic chemist now known as the “grandfather” of medical marijuana.

In Israel, the Health Ministry has its own medical cannabis unit and encourages clinical trials for the use of medical marijuana on a range of diseases. In addition to the autism trial, marijuana is being tested for or has been approved to treat insomnia, Tourette’s syndrome and Parkinson’s disease, among other conditions. Today, there are 27,000 medical marijuana patients in Israel, and the country is poised to approve its export. The burgeoning industry is about to become very lucrative: Experts estimate that Israel could reap $1 billion in exports over the next two years.

“Israel is a small country, but it may have cornered the market in terms of being at the epicenter of quality research and investigation” of medical marijuana, said Andrew Salzman, CEO of Kalytera, a marijuana drug development company with headquarters in the United States and Israel. Salzman spoke at the CannaTech, a conference on medical marijuana innovation in Tel Aviv, held from March 20 to March 22.

Aran’s autism research is based on his own observational study, on anecdotal evidence from across the world and on the internet. Autism, believed to be a genetic brain disorder, has no cure, and treatments differ from patient to patient. Google is full of accounts of frustrated parents who turned to marijuana after exhausting more conventional solutions and often saw improvement in their children.

In The Washington Post this year, Marie Myung-Ok Lee described how her autistic son was “consumed by violent rages” after his medicine stopped working. When she found the perfect pot cookie recipe, he was calmed to the point where he was able to ride a bicycle, an activity doctors had previously deemed impossible.

Last year, The Atlantic Monthly reported on a woman in Washington state who grows marijuana in her backyard for her 13-year-old autistic son. Marijuana helped him to stop throwing “aggressive tantrums,” and he eventually shocked his parents by asking to attend the dance at his middle school, where he danced with a girl for the first time.

Aran is encouraged by such stories. His study is double-blind, and it uses placebos in addition to the cannabis, which means that neither he nor his patients know who is getting the drug and who is not. In total, the study will test 120 patients, mostly children. About 18 people have enrolled since the study began in January.

“We explained to all parents that this is not magic, and the kids are going to stay autistic,” Aran said. “It is not a cure for autism.”

The patients are administered liquid drops. The formula is made by BOL (Breath Of Life) Pharma, which grows medical grade marijuana and processes it for medicine in its lab in Kfar Pines, a moshav in northern Israel. There are two different formulations being used in Aran’s study, in addition to the placebo. One includes every single cannabinoid, or active ingredient in the cannabis flower. The other isolates two active ingredients, THC and CBD. According to Tamir Gedo, CEO of the manufacturer, neither formulation induces a high in the patient.

So far, all the patients in the autism study have been able to take this medicine without problems, Aran said. In Yehuda’s case, it’s been a bit of a challenge at his specialized school, where he must go into an office to take it.

Though Sharon hasn’t yet seen any improvement, she is holding out to see whether the herb will help Yehuda. Her hopes, she says, are modest. She mentioned Yehuda’s penchant for banging an empty soda bottle on a counter at inconvenient times, like when he is supposed to be doing math homework, or at 5:00 a.m., when the family is asleep. Medical marijuana might help him put the bottle down — and restore some quiet in the home.

“We have to be very conservative with what we are expecting,” she said. “We are trying to control the symptoms to allow children to thrive to their potential.”

Correction, March 23: Due to an editing error, an earlier version of this article stated that Yehuda is “about 10.” He is nine.

Correction, March 27: An earlier version of this article mischaracterized Yehuda’s crying episode at the beginning of the article by stating that Yehuda experienced a “meltdown” and by describing such a meltdown. Yehuda cried, but it was not a serious emotional outburst.

Israeli Leading Research Into Pot As Palliative for Autism