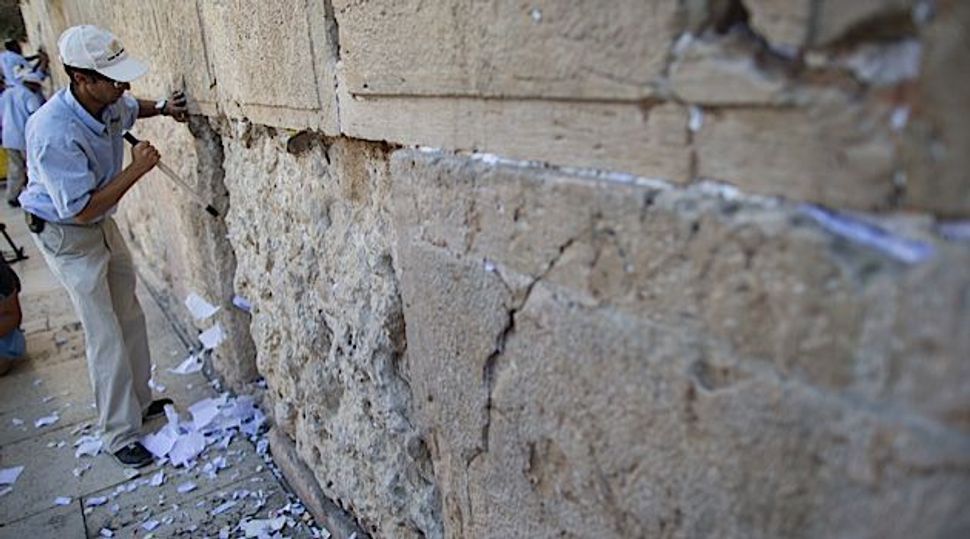 The Western Wall got a makeover this week when a cleaning crew removed thousands of tiny prayer notes from the cracks between the stones ahead of the Passover holiday.

The cleaning occurs twice of year, after which the notes are gathered into sacks and buried on the Mount of Olives cemetery, an ancient Jewish burial ground in Jerusalem.

“The people of Israel call this a wall of tears,” said Western Wall Rabbi Shmuel Rabinowitz in a video on the German Deutsche Welle site as several young men dug notes out of the wall behind him using long wooden sticks. “Many tears of Jews and many requests. We pray that God will listen to the prayers of the Jews and non-Jews who come here and give them what they ask for.”

Inserting notes in the Western Wall is a tradition that dates back to at least the 19th century, when visitors to the holy site would seek the help of local scribes to write Hebrew prayers for them, according to one account in Haaretz.

“It has to do with the idea that although G-d listens to heartfelt prayer from anywhere, some places are more auspicious for the prayer to be received and granted,” explained Rabbi Yirmiyahu Ullman in an article on web site of Ohr Somayach Yeshiva in Jerusalem.

Ullman posited that long-ago travelers to the Western Wall were often asked to take the prayers of those who weren’t able to make the difficult and expensive trek.

“It is very likely that rather than burden the traveler by having him remember so many individual prayers, people wrote their requests in notes for him to read at the Wall once he arrived,” he wrote.

Note writing wasn’t the only way to leave one’s mark on the wall. Starting in the Middle Ages, it was common for pilgrims to dip their hands into paint and make palm prints, carve their names into the stones and even hammer nails in the wall as a good luck ritual.

A British Mandate law put a stop to the more destructive practices: “It shall be held to be a matter of common interest to Moslems and Jews alike that the Western Wall should not be disfigured by having any engravings or inscriptions placed upon it or by having nails or similar objects driven into it,” read one policy, according to Haaretz.

The note-leaving continued, however, in spite of some Jewish legal debate whether the notes amounted to pollution at the holy site. Over the years, American politicians have left notes in the wall on trips to prove their commitment to Israel. In 2008, Barack Obama’s note was removed by a seminary student who sold it to an Israeli newspaper, an act that was condemned by Rabinowitz for violating the private communication “between a person and his maker.”

“Lord, protect my family and me,” Obama wrote. “Forgive me my sins and help me guard against pride and despair. Give me the wisdom to do what is right and just. And make me an instrument of your will.”

Trump was apparently less concerned with keeping private his message to God. During the 2016 election campaign, a Trump staffer shared Trump’s note which an adviser had promised to place between the ancient stones.

“Lord. May you bless the United States, our armed forces and our allies. May your guiding hand protect and strengthen our great nation,” the note read.

Today, the practice of note-leaving has a modern twist. The Western Wall Heritage Foundation, which administers the site, has a web portal for people to write notes, which are then printed out and inserted into the cracks. According to the site, some 541,079 individuals have submitted letters to date. Other organizations provide a similar online service.

While placing a note into the wall is a private, personal act, the mass removal of the notes often garners media coverage as the colorful scraps are swept out of the cracks to make room for new prayers.