Forverts In 1967: Leaders Of The Heroic Israeli Army 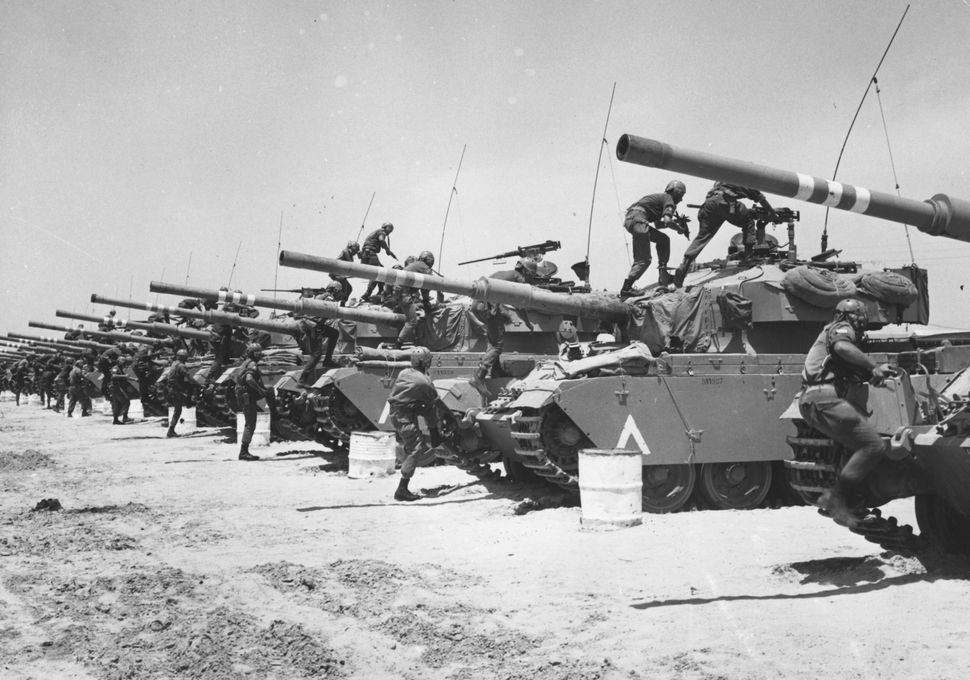 The following is a translation by Chana Pollack of the Yiddish Forverts’ 1967 coverage of the Six Day War:

Let’s open the door, for our readers, and permit them to peek inside the rooms of the Israeli Army Staff.

The Israeli general-staff of 15 ‘alufim’ (ranks ranging from Colonel up to General) is doubtless the youngest, most dynamic general-staff in the world. Its members range in age fro 39 til 47. Let’s agree, none of them dreamed of a military career as their life’s path. They’re not ‘military types’ in the sense of the term as used in the world outside of Israel. They’re young folks, idealists, who feel they’re the ones upon whose shoulders the state laid its security as well as its strength of existence. When they’ve grown older, and fulfilled their mission–they’ll retire from the army and head out in the direction of their individual civilian endeavors. Understandably, they are all, aside from idealistic, also first class strategists and trained military men. They’ve all got much frontline experience and also studied in the biggest military academies in the world–in the United States and in France.

Let’s start with the Chief of Staff, Yitzchak Rabin. Already in the Israeli War of Independece, 19 years ago, he was a Brigadier Commander. He’s considered to posses an iron logic, calm and is fair. When he took up his post, after Chief of Staff Zvi Tsur, he believed he’d likely have a quiet time of it, and could devote himself primarily to the mechanization of the army, and not chasing [con’t p. 6] enemies. It turned out events forced him to get ‘real’ and to react strongly than his predecessor. Let’s recall those four times he faced Syria–he’s a pioneering infantry expert. The government’s cabinet he is much beloved and for that reason his army career was extended. He also distinguished himself his decades long contact not only with security ministry but also with the foreign office. His slogan is that it’s not enough to be militarily victorious, but also to know how to profit from that victory. During the time of his service the Israeli army grew more powerful in its armored cars, tanks, modern airplanes and other contemporary weaponry.

As it happens, only the Chief of Staff received the rank of General [Rav-Aluf/Five Star General]. All other members of the General Staff are merely have the rank of Colonel [Aluf].

As mentioned, Colonel Bar-Lev recently took over the position of Vice-Chief of Staff after returning from France.

Born in Zagreb, Yugoslavia, he was 14-years-old when he came to Israel. (He’s now 43-years-old). He studied at the Mikve Israel agricultural school, and is aligned with the Palmach. During the War of Independence he lead various actions. During the war he commanded an armored car regiment. He’s considered an outstanding battle leader. Twice already he led his soldiers to victory in the Sinai Desert. And then during the War of Independence where he reached Abu Ajila and reached El Arish. The second time–during the Sinai Campaign he was at the head of an armored car unit and reached the Suez Canal. After the Sinai Campaign he was awarded the rank of Commander of the Armored Division and during that time the armored car department was enhanced.

Aluf Bar-Lev appears a ‘cold-blooded’ strategist. He has an MA in Economics from Columbia University.

The two previously mentioned (Rabin and Bar-Lev) together portray what’s called the ‘command center’ of the General Staff–together with Colonel Ezer Weizmann. Ezer Weizmann is the leader of the ‘wing’ or the General Staff Department. The three distinguish themselves from one another, be it personally or professionally and are all accustomed to responding to all manner of situations that can arise.

Aluf Ezer Weizmann (as his name implies, he related to Chaim Weizmann) was born in Tel Aviv. Earlier he was the head of the Air Force and since 1942 he’s been in the army. He first learned to fly in South Rhodesia. During the War of Independence he bombed Egyptian columns as they moved towards Tel Aviv (near Migdal).

The current commander of the Airforce who replaced Ezer Weizmann is Aluf Mordechai Hod known simply at Motke (he was previously not called Hod but rather Feyn). For eight years he was Ezer Weizmann’s assistant. Since 18 he’s been in the army and currently is 40 years old. A kibbutznik, he was born on Degania, a third generation agriculturalist in Israel. He was the first Israeli pilot to study in a British course to fly the Mirages. He began his career by studying in a civilian pilot’s course in Italy. During the War of Independence he led from the air in one of the first Czech Messershmidt planes. Motke is also a former member of the Palmach and for a while was active in ‘illegal’ immigration to Israel. One of those ‘illegal’ immigrants, Gidon Rosengart had to give over his travel documents in Rome, during the British Mandate. Motke then had to re-create false documents by himself.

Regarding Motke Hod’s airforce tactics you can ask the Syrians, as his pilots can be seen from Damascus….

Israel’s Naval Commander is 46 year old Aluf Shlomo Arel, a Lodz native. At 6 years old he was brought to this country. In 1936 he graduated from naval academy of Beitar in Italy. He graduated as a ship’s Captain. The British later imprisoned him in Acco. He was a first office on British ships as well. He served on ships traveling to Murmansk and in secret operations. Twice his ship was sunk and he was rescued. Once he floated for ten days aboard a rescue boat alone on the ocean. During the War of Independence, he led an action in Beirut, Lebanon where Hitler’s yacht was sunk. He completed a commando and staffing course for the British army. He’s responsible for the Israeli shorelines the way Motke is for the Israeli skies.

Aluf Yisrael Tal is a graduate of Hebrew University in Jerusalem. He heads the tanks and armored division. He began his military education with the British army. He led army actions against Syrian attempt to use tractors to divert the Jordan waters.

At the head of the Southern Army is Aluf Yeshayahu Gabish. A Sabra, he’s 42 and also of the Palmach. He was one of the most important planners of the Sinai Campaign. For a while he led the intruction and tactics division, at the General Staff. Under his direction the response to the Soviets was crystallized as the doctrine applied to the Egyptians and Syrians.

Aluf David Elazar–Commander of the North

Aluf David (Dudu) Elazar, a Yugoslavian born in 1925, came to Israel with Youth Aliya in 1940. He was raised on a Kibbutz belonging to the Hashomer Hatsair movement. In 1946 he joined the Palmach and during the Sinai Campaign he became commander of an armored brigade in the Gaza Strip and got the reputation as a first-class battle leader. Aluf Uzi Narkis–Commander of the Central Army

Aluf Uzi Narkis was born in Israel and is 42. He was the first Israeli to study in a French military academy. His expertise is leading fighters in difficult geographic and strategic locales such as in narrow passages, narrow and populated regions. Also a Palmach member originally, whose father was the (deceased) director of the Bezalel Academy, Mordechai Narkis, and his mother was the (deceased) Yiddish writer Rikuda Potash.

Additional ‘Alufim’ In The General Staff

The right hand of Chief of Staff Yitzchak Rabi is Aluf Mattityahu Peled. He is responsible for filling the army’s every need. For instance, ammunition, food, communication, and thousands upon thousands of little details. While in position, for example, each tank must be followed by cars with equipment for their sole use. This must involve not a few complications.

Aluf Peler is 44 and is a Haifa native who graduated from Beit Hakerem’s Highschool in Jerusalem. Also a former Palmach member, who during the War of Independece was a commander of the Givati unit. He knows Arabic and in 1956 was commander of taking Gaza.

The Department of Manpower, is led by Aluf Shlomo Ayl, who is 45 and a native of Russia.

Ezer Weizmann is aided by Aluf Rechavam Zeevi also known as ‘Gandi.’ During the Sinai Campagin he was the Chief of Staff of the Southern Army and is a fifth generation Israeli. During the Campaign he was ‘number two’ and can be thought of as the next ‘number one’ Chief Commander. His father was Secretary of the Histadrut in Jerusalem.

The youngest member of the General Staff is 39-year-old Ariel–Arik-Sharon. He currently leads the tactics wing and is a former parachutist commander. He graduated Law at Hebrew University. He used to lead the Israeli reprisal actions. One assumes he’s seen many fallen–Jews and Arabs.

The leader of military intelligence and investigations is Aluf Aron Yariv, a native Latvian who is 46. He was for some time Military Attache of Israel in the United States. He graduated military school for officers in France. He likely is aware of all of Nasser’s plans as well as the other Arab politicians and military leaders.

At the cultural department is Alub Shalev. He is responsible for the culture and entertainment of the army and is their spokesman.

Leib Rochman was the Forverts’ correspondent in Jerusalem in the 1960s.

Forverts In 1967: Leaders Of The Heroic Israeli Army