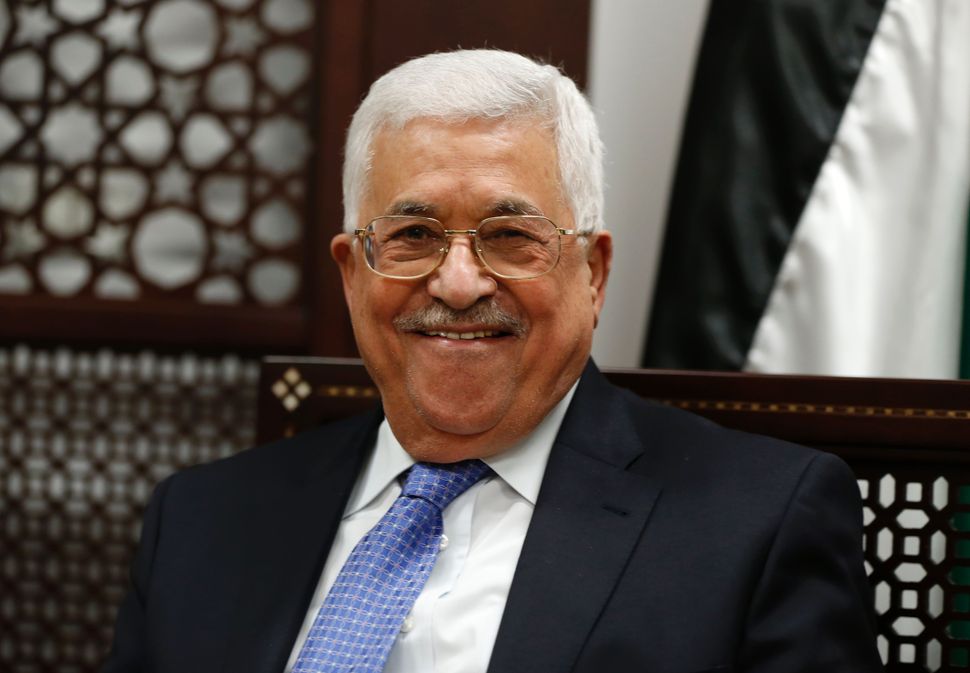 WASHINGTON (JTA) — President Donald Trump wants a deal with Israel and the Palestinians. The Israeli and Palestinian leaders say they want Trump to make the deal.

What could go wrong?

For all the good cheer guaranteed when Palestinian Authority President Mahmoud Abbas meets Wednesday with Trump at the White House, it’s a question that’s going to be hanging over the proceedings, not least because of Abbas and whether he is able to make good on any deal.

“There is a huge question of who the Palestinian leadership is, can Abbas deliver?” said Tareq Baconi, a fellow with Al-Shabaka, a Palestinian think tank and advocacy network. “The Palestinian Authority is suffering a crisis of legitimacy that is only becoming more acute with time.”

Abbas, 82, was elected in 2005 to a four-year term but has yet to step down. Now he is facing increasing restiveness. His Palestinian Authority controls only the West Bank, while his rival, Hamas, controls the Gaza Strip.

Abbas’ rivals appear to be positioning themselves to challenge his leadership. Hamas issued a new charter this week that tones down its rejectionism of the peace process and divorces itself from the Muslim Brotherhood, an apparent bid to cultivate the moderate Arab states that have backed Abbas.

Within Abbas’ Fatah party, Marwan Barghouti, currently serving life sentences for ordering terrorist murders during the second intifada, is leading a prison hunger strike, coming across as more proactive behind Israeli bars than Abbas is as president.

Abbas is “coming and he wants to show he remains a player,” said Dennis Ross, a veteran Middle East peace negotiator under Republican and Democratic presidents.

“He has been weakened,” said Ross, a Washington Institute for Near East Policy fellow speaking on a press call organized by The Israel Project. “What the president has done is make him seem more important again.”

The dynamic that plagued the last round of talks – the profound distrust between Abbas and Israeli Prime Minister Benjamin Netanyahu that helped scuttle the Obama administration’s pass at peacemaking in 2014 – has not gone anywhere.

“Netanyahu and Abbas won’t happen by themselves,” said Eyal Ben-Reuven, a Knesset member for the opposition Zionist Union and a member of the parliament’s Foreign Relations and Security Committee. “You can sit Abbas and Netanyahu across from each other for a month, nothing will happen.”

Ben-Reuven, who was in Washington hosted by J Street and meeting with Congress members, said he was encouraged by indications that Trump wants a comprehensive peace deal involving other Arab nations.

“There is an international dimension, but it must be led by the United States,” he said.

Yet Abbas seems determined to seize the Trump moment with a vigor he has not displayed in years. Abbas, who since the collapse of the 2014 talks has attached preconditions to any renewal – principally, a demand for a settlement freeze – reversed course last month and said he is ready to meet with Netanyahu under Trump’s auspices.

“There is a real opportunity to make peace, and the international community should reinforce this opportunity and not miss it, because the region is in a state of boiling, and the occupation cannot continue in any way,” Abbas spokesman Nabil Abu Rudaineh said Monday in a release posted on Wafa, the official Palestinian news wire.

“The president’s ultimate goal is to establish peace in the region,” White House spokesman Sean Spicer said Monday at the daily briefing for reporters. “That’s obviously the goal in the discussions he has with the head of the Palestinian Authority, that’s going to be a relationship that he continues to work on and build, with the ultimate goal that there is peace in that region between Israel and the Palestinian Authority.”

Ori Nir, the spokesman for Americans for Peace Now and formerly a reporter who covered Israel and the Palestinians for decades, said expectations for now should not be too high.

“This is an introductory meeting, a getting-to-know-you for both leaders, so I would advise against expectations for dramatic developments,” he said. “Trump could use the meeting to help empower Abbas, and the Palestinian leader, who will undoubtedly come to Washington with a list of requests, should be ready for some gestures that demonstrate his commitment to diplomacy and peace.”

Left open is whether Trump will reassert a commitment to the two-state solution, which Abbas emphatically favors. In his February meeting with Netanyahu, Trump was agnostic. Right-wing Republicans and some Israeli Cabinet ministers to Netanyahu’s right favor Israel’s annexation of portions of the West Bank.

Trump is scheduled to visit Israel later in May for what the Israeli media have said will be “advanced talks.” It’s not known yet whether he will also meet with Abbas at that time.

Abbas has named a new envoy to Washington, Husam Zomlot, who has gone on a charm offensive, inviting Jewish leaders – including some from right-of-center groups who have been sharp critics of the Palestinian Authority – to a gala reception on Wednesday evening, after the Trump-Abbas summit.

Jonathan Schanzer, a vice president of the Foundation for Defense of Democracies who has written extensively about the Palestinians, said Abbas had little to lose by cultivating Trump – for now. Playing along increases pressure on Netanyahu to make concessions.

“If Abbas agrees to move forward and engage in bilateral diplomacy under U.S. leadership, it all comes down to Bibi,” Schanzer said, using Netanyahu’s nickname.

It’s not clear, though, what concessions Trump wants or will be able to extract from either side. Spicer said the White House “continues to have discussions” with Netanyahu about settlements. Trump has asked Netanyahu to slow – but not stop – settlement building as a means of reviving the peace talks.

Netanyahu, meantime, has challenged Abbas to stop payment of subsidies to families of terrorists killed or jailed by Israel. Republicans in Congress want to condition funding to the Palestinian Authority on Abbas cutting off the “martyr” funds.

It’s not clear whether Trump would back such a move. Notably, the State Department is contemplating substantial cuts in assistance to the vast majority of countries funded until now – except for the Palestinian Authority, which is in for a slight increase.

Jason Greenblatt, Trump’s point man in the region trying to revive talks, is emphasizing economic recovery for the Palestinians as a building block to restarting talks; a threat of a cut in assistance could be counterproductive.

Still, an offer from Abbas to cut the assistance to the terrorists’ families could be a productive way to launch the talks, said Ross, who also advised coupling it with a recognition of the Jewish national movement – short of the recognition of Israel as a Jewish state Netanyahu demands, but enough to show good will.

“Trump has leverage” to extract those concessions, said Ross, who knows Abbas personally. “The leverage he has is he can give [Abbas] relevance at a time he desperately needs it.”

Schanzer said ending the payments to the terrorists’ families could be too steep a political price for Abbas to pay, but he was sending other signals that he was ready to stop funding terrorists – for instance, in cutting funds to the Hamas-controlled Gaza Strip.

Baconi said any concessions extracted from Abbas would have to be coupled with concrete concessions from Israel in order not to backfire and further decrease Abbas’ credibility among Palestinians, who see the United States as historically favoring Israel and sanctioning its settlement expansion.

He noted that Netanyahu already seemed emboldened by the friendlier relationship he had with Trump. In his February White House news conference with the president, Netanyahu laid down a precondition of Israel maintaining security control of the entire West Bank as part of a final status agreement. That isn’t new a position for him; what was new was advancing it in the presence of a U.S. president who did not object.

“Netanyahu was able to put forward a framework far beyond anything other presidents have accepted,” Baconi said.