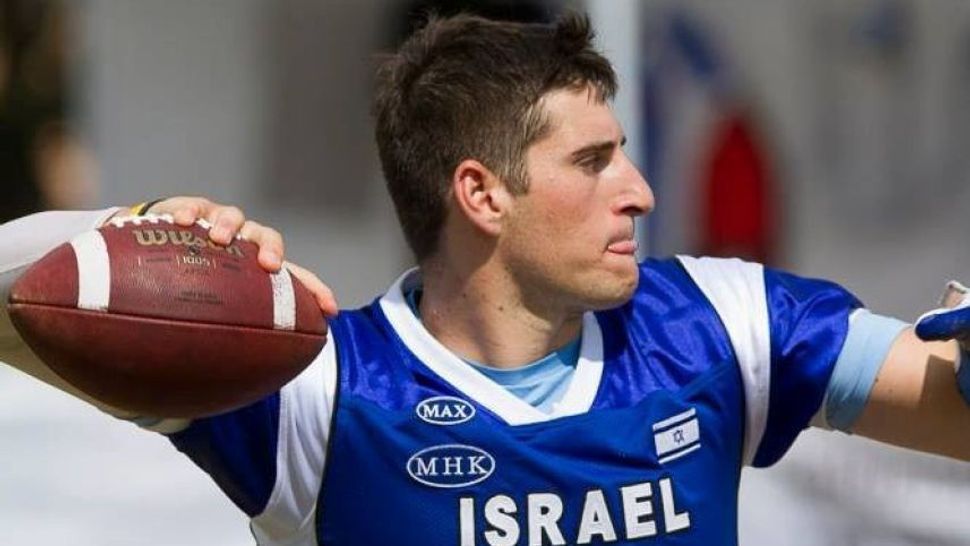 (JTA) — RAMAT HASHARON, Israel (JTA) – An Israeli soldier clapped football great and Vietnam War veteran Roger Staubach on the shoulder at a soccer field here, telling the 1963 Heisman Trophy winner and U.S. Naval Academy grad that he and his brother serve in the paratroopers.

The introduction Thursday evening prompted Staubach to hark back to early June 1967, when he was serving in Vietnam and heard a report on his walkie-talkie that Israel was about to be attacked. Staubach recalled being concerned for Israel – and then a week later learning that the country emerged victorious in the Six-Day War.

Staubach, who went on to play 11 seasons at quarterback for the Dallas Cowboys and win two Super Bowl championships, was among 18 Pro Football Hall of Famers who came to Israel this week on a week-long goodwill visit sponsored by New England Patriots owner Robert Kraft.

For all but two it was their first time in Israel. Some told Kraft they were afraid to come. Others were drawn by their religious convictions. On Friday, they visited Christian sites near the Sea of Galilee, and many underwent baptism in the nearby Jordan River.

“I love bringing people from America to the Holy Land who’ve never been here,” Kraft told JTA in an interview following Thursday’s event in this coastal city near Tel Aviv. “I think bringing these Hall of Famers – it’s a treat for them, and they see that [Israel] is not like it is [described] in the media.”

Noting the fear, he added: “If I didn’t come on this trip, they wouldn’t have come. If I was willing to come, they’d come.”

The visit was kept under wraps until just before their arrival Wednesday over concerns that anti-Israel activists might pressure the players to boycott the country.

Before returning to America on Tuesday, the Hall of Famers will attend the dedication of a sports complex in Jerusalem with a regulation-size football field that Kraft is building. In between, the delegation is visiting Tel Aviv, the Old City of Jerusalem and the Dead Sea.

In Ramat Hasharon, a lineup of Israeli high school players excitedly awaited the legends on the field as they alighted from two charter buses along with their spouses, Kraft and his staff, and Hall of Fame officials. The heroes of yore wore their Hall of Fame yellow blazers.

The group was introduced to hearty applause from an audience of adult Israeli tackle football players sitting in the grandstand, then settled in to watch a game featuring high schoolers.

Nearly 2,000 players — males and females — participate in adult and youth football leagues in Israel, according to Steve Leibowitz, the president of American Football in Israel.

Kraft said such delegations serve to deepen interest in football.

“It’s a great thrill for kids in the country, that they can meet guys they look up to,” he said.

Jerome Bettis extended his right hand to display the Super Bowl XL championship ring he earned as a running back with the Pittsburgh Steelers in a victory over the Seattle Seahawks. It was his final game before retiring in 2006.

Brown, widely considered the greatest running back ever, was helped up from his chair by Cris Carter, a wide receiver voted to an all-1990s team, and waved to the crowd. Dickerson, whose single-season record of 2,105 yards has stood for 32 years, and then Faulk took bows.

Carter was sandwiched between Bettis and Brown.

“We’ve got some running backs!” he exclaimed.

Montana, winner of four Super Bowls while quarterbacking the San Francisco 49ers, was introduced last, and drew the biggest ovation.

As for Staubach, the visit to Israel was fraught with meaning for several of the players.

Lem Barney, a former Detroit Lions cornerback, and Dave Casper, an ex-Oakland Raiders tight end, told JTA that their religious convictions drew them to accept the invitation from Kraft and the Hall of Fame.

“When they talked about coming here, the birthplace of our Lord and savior – I could’ve walked here,” said Barney, who serves as associate minister at Empowerment Church in Southfield, Michigan.

As to sites he looked forward to visiting in Israel, Barney wasn’t particular.

“Just seeing a puddle of water. Just being here – the great spirituality it holds,” he said. “Being here, where I know my Lord and savior is from, is just so amazing. This is a dream come true.”

Barney believes that most NFL players have a religious conviction, and “couldn’t have done what they did in the league without the spiritual” dimension.

Casper said he doesn’t like to travel, and 10 years ago he would not have taken off from his job in the insurance industry in his native Minnesota to go abroad for a week. But coming here with his wife, Susan, was different.

“Israel is the center of what’s happening, and it’s good to see it,” Casper said.

Casper said approximately 25 percent of his clients are Jewish, and he frequently asks them about Judaism. Several urged him to visit Israel, including those with business interests in the Jewish state.

Israel apparently is good for the business of the Patriots, too.

Kraft told JTA that his team won Super Bowl 50 over Seattle ahead of the first visit of Hall of Famers he sponsored in 2015, and Super Bowl LI, in equally thrilling fashion, over the Atlanta Falcons in February.

Will he continue the every-other-year pattern of championship wins and Israel trips?