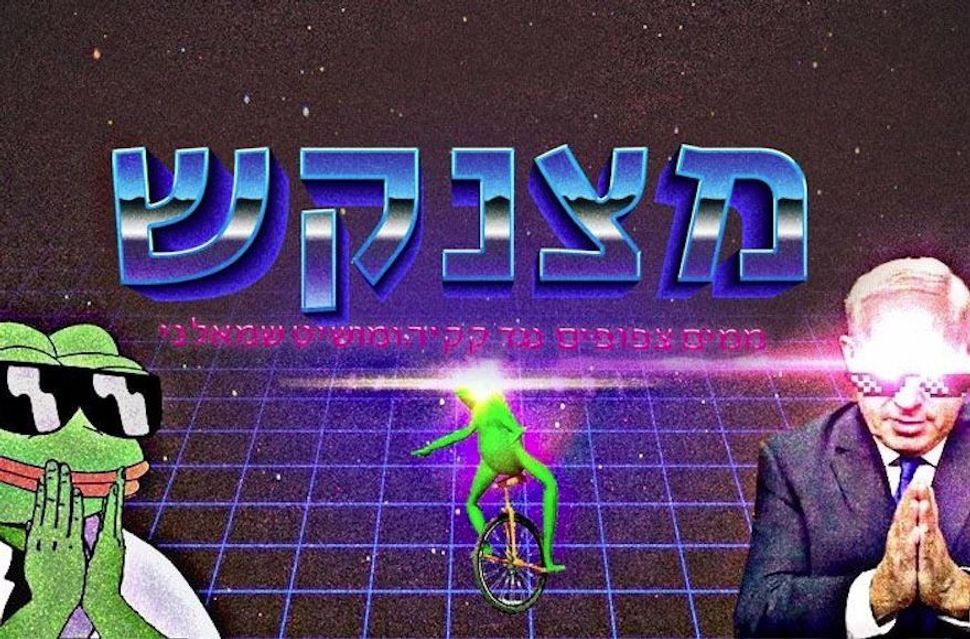 JERUSALEM (JTA) – For many Jews, Nazis are public enemy No. 1, and using Nazi imagery to make a political point is strictly verboten.

But some young, right-wing Israelis aren’t buying it.

Inspired by the so-called alt-right abroad, their online community makes liberal use of anti-Semitic and Nazi imagery to mock and malign what it sees as the real threat: Israeli and Jewish leftists.

“We’re fighting back in a new way,” said Guy Levy, 40, the manager of an advertising office in Beersheba and a member of the community. “Our messages aren’t politically correct, but that’s what makes them funny, and stinging.”

Many Israelis heard about this community for the first time Saturday when Yair Netanyahu, the prime minister’s son, credited its main Facebook page as the source of an anti-Semitic themed cartoon he shared. The page, called Tight Memes Against Kakihomoshit Leftists, has since been heavily referenced in the local media. The publicity significantly expanded it following.

Netanyahu posted the cartoon Friday with the caption “food chain.” It pairs the Jewish billionaire and philanthropist George Soros — who the alt-right regularly portrays as a leftist “puppet master” — with at least two other figures associated with the far right and conspiracy theorists, a robed “Illuminati” figure and a lizard creature. All three in turn are seen as manipulating former Israeli Prime Minister Ehud Barak and other prominent critics of Benjamin Netanyahu.

Jewish leaders in Israel and the United States rushed to rap Netanyahu over the post. “The cartoon that Yair Netanyahu posted contains blatantly anti-Semitic elements,” the Anti-Defamation League’s Israel office tweeted Sunday in Hebrew. “The dangers inherent in anti-Semitic discourse should not be taken lightly.”

Meanwhile, leading white supremacists, including former Ku Klux Klan grand wizard David Duke and those behind the U.S. neo-Nazi website The Daily Stormer, purported to embrace Netanyahu as one of their own.

However, members of the community centered around the Tight Memes Facebook page responded very differently.

Dan Gefen, 36, a libertarian economist and longtime member of the community, said the cartoon is meant as a criticism of anti-Zionist meddling in Israeli democracy, including by Jews like Soros, who has funded left-leaning Jewish groups like J Street and civil rights groups in Israel. The anti-Semitic themes are simply a sendup of political correctness, he said.

“If you’re in the culture, you don’t see it as anti-Semitic,” he said. “The general idea is every small thing a right-winger does, they’re calling you a Nazi or a fascist. So it’s making fun of that. It’s a lie that tells the truth.

“The [left-wing] reaction is very important,” he added. “Without the reaction, the joke doesn’t work.”

In recent days, the Tight Memes Facebook page has filled with posts mocking the media’s reaction to the cartoon as humorless and hypocritical. Many have highlighted past examples of Israelis comparing using Nazi imagery to condemn trends on the right, sometimes to the delight of Duke and other white supremacists.

Asked for comment in a Facebook message, an administrator of the group replied, “We don’t cooperate with journalists. Especially not the fake news.”

Yair Netanyahu, who took down the cartoon Sunday evening but did not apologize, has shared several of the posts along with his own comments, including on one, “The left is so sensitive that it’s something.”

Gefen said the Tight Memes community borrows “culturally and even ideologically sometimes” from the alt-right. Like that group, it is loosely organized online, nationalistic and delights in defying social norms it feels are imposed by left-wing elites. But unlike some in the alt-right, he said, his community is not anti-Semitic, for obvious reasons, or racist.

While it operates on a variety of Facebook pages that come and go, Gefen said, the Tight Memes page is the community’s central meeting place. The page’s cover photo features both Pepe the Frog, a cartoon figure that the ADL deemed a hate symbol after it was co-opted by the alt-right, and Benjamin Netanyahu wearing sunglasses. The profile picture is a rendering of Netanyahu drinking from a jug labeled “the tears of leftists.”

Some 3,000 people followed Tight Memes prior to Netanyahu’s post, and that number has now reached well over 4,000.

Most of the posts are relatively standard right-wing political attacks on Netanyahu’s critics delivered with troll-like memes, many adapted from content popularized on 4chan, an alt-right gathering place. Pepe makes frequent appearances, sometimes in Nazi uniform. Other times he appears as a Likud member or religious Zionist.

Alt-right pejoratives like “cuck” are mixed with Hebrew neologisms, like “kakihomoshit,” the nonsensical curse word used in the full title of the Tight Memes page. “Kaki” is Hebrew slang for feces, while “homoshit” is a combination of two well-known English slurs.

Levy, the advertising office manager, who also runs a blog fact-checking the Israeli media, discovered Tight Memes about a month ago. He and said he was tired of seeing leftists bully Israel’s right wing, including the Netanyahu family.

“‘We’re fascists, we’re racists, we hate peace.’ These are the ways they’re trying to brand us. So we embrace it,” he said. “It’s even worse I’m sure for Yair. His family is being persecuted. I don’t know if he’s reacting in the best way, but this is the reaction.”

The Netanyahus face a raft of investigations. The prime minister has been questioned in a pair of fraud investigations relating to alleged illicit ties to executives in media, international business and Hollywood. His associates are being probed relating to a possible conflict of interest involving the $2 billion purchase of German submarines.

Israeli Attorney General Avichai Mandelbilt announced Friday that he intends to indict the prime minister’s wife, Sara, for fraud over her alleged use of public funds for household expenses.

Yair Netanyahu posted the cartoon — which included likenesses of a former housekeeper at the heart of the case against his mother and another man leading weekly protests demanding indictments of his family — hours after Mandelbilt’s announcement. It was not the first time Yair has lashed out at leftists on Facebook in recent weeks.

Benjamin Netanyahu, who reportedly takes social media advice from Yair, has hardly been less restrained, calling the investigations of his family a “witch hunt” by “leftists” and the “fake news.” He has sought to characterize the probes, apparently with some success, as an attack on all right-wing Israelis.

“They don’t want to just take me down,” he said in Tel Aviv last month in one of a pair of rallies he has recently held. “They want to take us all down.”

Netanyahu has yet to comment on the latest controversy surrounding his son. When reporters asked Netanyahu directly about the issue at the weekly Cabinet meeting Sunday, he replied, “Thank you, but this isn’t a press conference.”

That, too, became a meme on Tight Memes. In a video clip, a pair of animated sunglasses and a cigar appear on Netanyahu’s face. The text reads, “I didn’t choose the thug life. It chose me.”