Was Ruth Bader Ginsburg Snubbed For ‘Jewish Nobel’ — And Was Bibi Behind It? 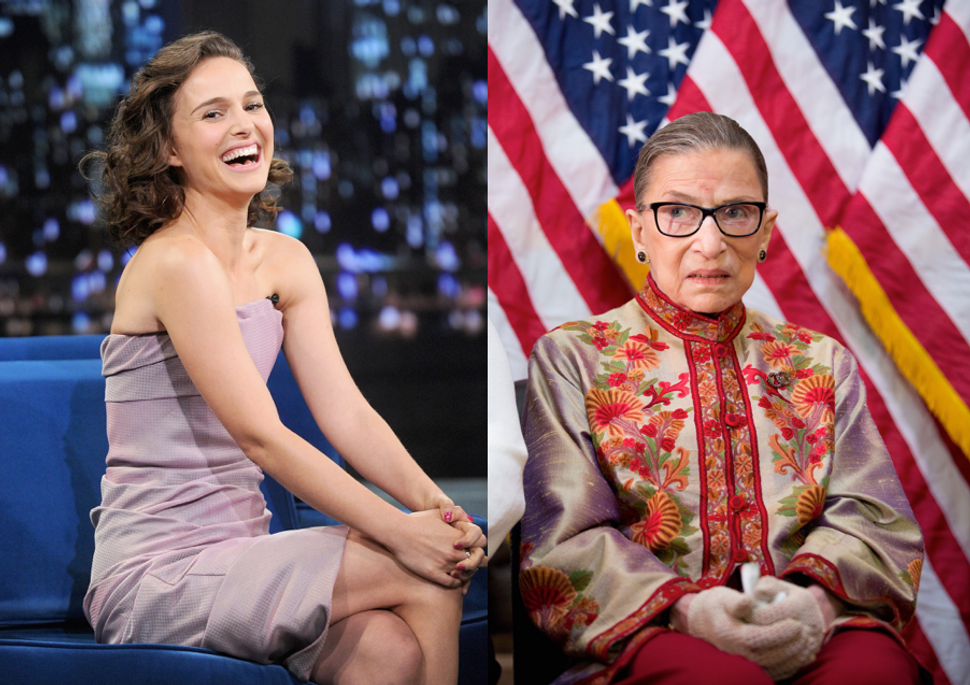 But a report in Haaretz is claiming that Israeli Prime Minister Benjamin Netanyahu stopped the Genesis Prize Foundation from its original plan: to give the “Jewish Nobel” to Ginsburg.

According to Stan Polovets, co-founder, chairman and CEO of the Genesis Prize Foundation, Ginsburg was on a shortlist of 15 candidates for the Genesis Prize before the organization decided to create a lifetime achievement award especially for her. Polovets said that Ginsburg was dropped from consideration because of her legal obligations as a Supreme Court justice.

The prize then went to Portman, who was selected from a group of four finalists in a unanimous decision by the foundation’s prize committee in late October, according to documents reviewed by the Forward. During that meeting, Polovets served as the proxy for Jill Smith, a philanthropist who sits on the prize committee board and focuses on women’s advancement.

Polovets said that he and the foundation decided to honor Ginsburg with a lifetime achievement award after it became clear that ethical policies for the Supreme Court might prohibit her from receiving the Genesis Prize Foundation’s large gift. It was previously reported that Ginsburg was selected for the lifetime achievement award by the five past recipients of the Genesis Prize, including Portman. The prize, worth $1 million, comes with the expectation that the recipient will work closely with the Genesis Prize Foundation for one year to help donate all the prize money to charities and causes of their choosing.

On Friday, Haaretz reported that the prize was “supposed to go to Justice Ginsburg.” The article stated that two sources had different reasons as for why it ended up with Portman. One said the gift rules for Supreme Court justices made Ginsburg unable to accept it.

Another source suggested that Netanyahu’s displeasure with Ginsburg’s nomination led to the Genesis Prize Foundation swapping her for Portman. The source, someone “close to the committee,” said that those involved in the nomination process remembered that Ginsburg had made disparaging comments about then presidential candidate Donald Trump. Haaretz wrote that Netanyahu was worried that Trump would not like seeing a picture of Netanyahu shaking hands with the liberal justice.

Polovets denied that Netanyahu has any input into the nomination process.

“He is never notified before, he is not involved in any kind of decision making, and he typically learns about it when the press releases are issued,” Polovets said of Netanyahu.

In an emailed statement to the Forward, Haaretz stood by its reporting.

“Justice Bader Ginsburg was told she would receive the prize, informed people and even sought donation recipients among Israeli NGOs,” the statement read.

Polovets said that the leaders of the Genesis nomination and prize committees had no input on Ginsburg’s nomination for the lifetime achievement award. He added that the Genesis Prize Foundation undertakes a thorough vetting process with the shortlisted individuals before it gives the names of the finalists to the prize committee. Chief among the organization’s concerns are the recipient’s willingness to engage — publicly — in a yearlong philanthropic project.

“They’ve had this situation where highly accomplished individuals that they wanted to acknowledge could not receive the prize,” he said of the committee.

Was Ruth Bader Ginsburg Snubbed For ‘Jewish Nobel’ — And Was Bibi Behind It?