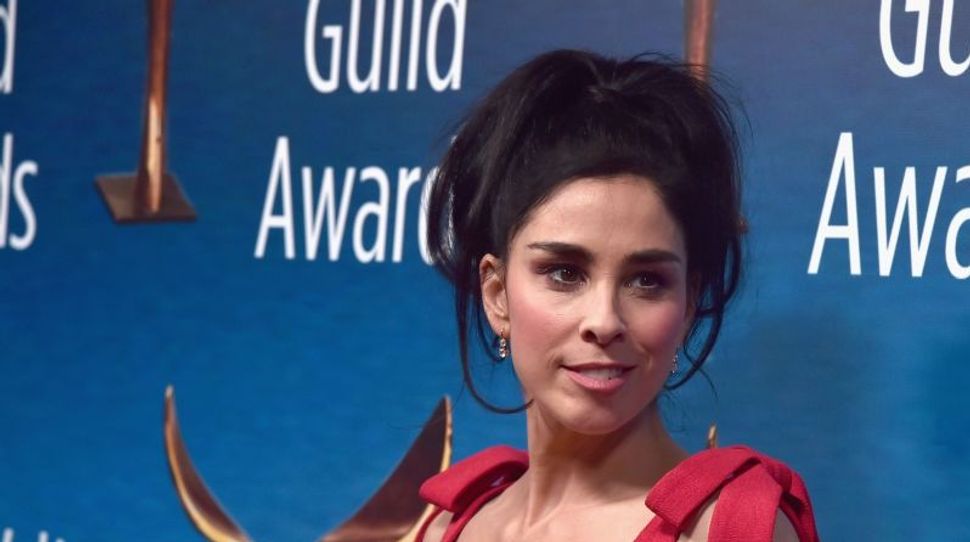 Comedian Sarah Silverman is at the center of a Twitter storm after tweeting in support of detained Palestinian teenager Ahed Tamimi over the weekend.

Silverman, of course, is no stranger to controversy, politics or Israel. She has long been active in progressive Democratic politics – campaigning for Barack Obama and Bernie Sanders – and throws comic barbs at the Trump administration.

On the Israeli front, she has been a cheerleader for her sister Rabbi Susan Silverman’s activism on behalf of Women of the Wall, and her battle against the expulsion of African asylum seekers, and joined her last year in contributing to a Passover Haggadah for a group called Save Israel: Stop the Occupation, which advocated for an end to the occupation on its 50th anniversary.

But in recent days Silverman has plunged into the Israeli-Palestinian conflict on an unprecedented scale.

It all started on February 16 when Silverman tweeted in support of Ahed Tamimi – the Palestinian teenager who was detained by Israel in December after she was filmed slapping an Israeli soldier. She has since become a global symbol of the Palestinian resistance movement.

Jews have to stand up EVEN when — ESPECIALLY when — the wrongdoing is BY Jews/the Israeli government. https://t.co/vIKDxgLm41

Her tweet was intended to support the Amnesty International campaign lobbying against the 17-year-old’s detention (Tamimi faces five counts of assaulting security forces) and calls on Prime Minister Benjamin Netanyahu to release her.Predictably, Silverman’s pro-Tamimi tweet inspired an avalanche of responses – both praise from Tamimi supporters, and harsh criticism from pro-Israel advocacy groups chiding her for supporting Tamimi. Critics called Silverman “irresponsible,” told her to “stick to comedy and stay out of politics,” and charged that she is “unwittingly complicit” in Palestinians’ “child abuse.”

Among those replying to Silverman were Frimet and Arnold Roth – the parents of Malki Roth, who was killed at age 15 in Jerusalem’s Sbarro terrorist attack in August 2001.

They tweeted: “Entertainers exploiting their fame are often a poor choice for clarifying what’s moral or good. Sarah, did you stand up for our daughter Malki and the other 15 Jewish lives extinguished by Ahlam Tamimi, Ahed’s cousin and role-model-in-life? Do you stand with Ahed’s call to kill?”Ahlam Tamimi assisted the Hamas terrorists who carried out the attack on the pizza restaurant in 2001. She was arrested by Israeli authorities, pleaded guilty and was sentenced to multiple life sentences. However, she was released in 2011 and sent to Jordan as part of the Gilad Shalit prisoner exchange between Israel and Hamas.

In the spirit of her recent TV series “I Love You, America” – in which she meets citizens from across the political spectrum, in an attempt to prove that patriotism exists on both sides of the divide – instead of simply hitting back at her detractors and embracing her supporters, Silverman has been retweeting many of her critics, and responding with questions and comments.

She self-deprecatingly portrayed herself as “dim-witted” and “a dumb comic” who was trying to learn more, challenging her critics to defend their positions. In effect, she has turned her Twitter feed into an Israeli-Palestinian seminar, leading one of her followers to thank her for “building bridges instead of walls.”

In one exchange, conservative pundit Noah Pollak attacked her advocacy on behalf of Tamimi, He called it “narcissistic Hollywood political posturing at its vilest and most ignorant,” and added Silverman was “pimping for a notorious terrorist family. What a disgrace.”

Silverman responded: “Life is very black and white for you. It’s not for me. You’re easy with labels brother. But I don’t see you sticking your neck out. You judge from your perch. My family is in Jerusalem. My nephew in the IDF. Shits complicated. Peace.”

Last month, Silverman came under fire on social media after she posted an Instagram photo of her nephew Adar – her sister Susan’s 19-year-old son – in his Israeli army uniform, wishing him a happy birthday.