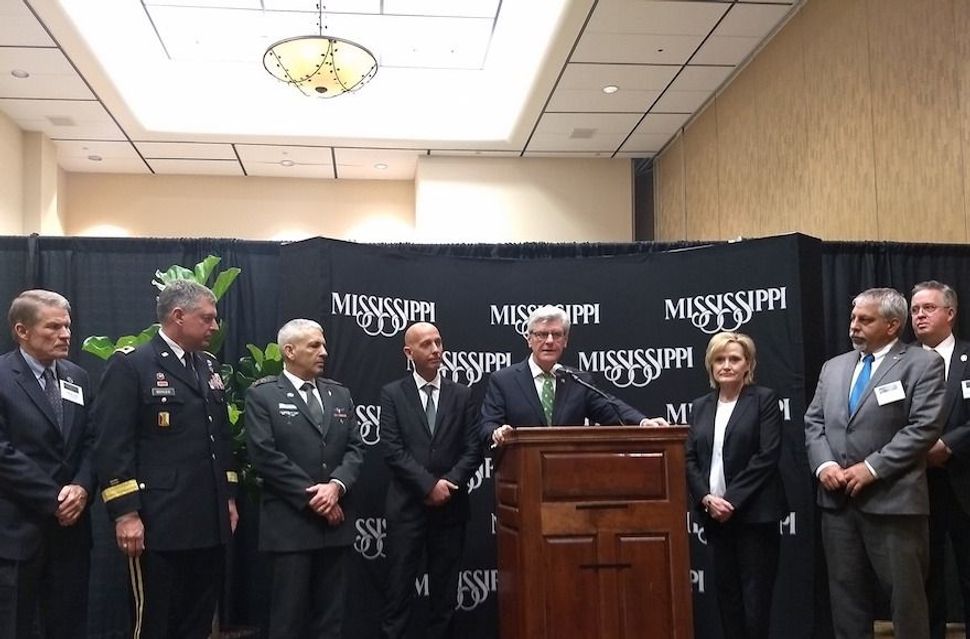 Mississippi Gov. Phil Bryant at a press conference with Israeli officials at the Homeland Defense and Security Summit in Biloxi, March 13, 2018. Image by Ben Sales/JTA

BILOXI, Miss. (JTA) – A homeland security conference took place in a southern Mississippi town with an Air Force base and a shipbuilding yard.

Among those in attendance were the commandant of the U.S. Coast Guard; a general from India, the world’s second-largest country; and representatives from Taiwan and South Korea, a U.S. ally in a key trouble spot.

But Israel was the star.

The International Homeland Defense and Security Summit, organized by the state government, was held Tuesday in this Gulf Coast city far from any Jewish population center, in a state the local Israeli consul visits only twice a year. But representatives of 16 Israeli companies attended, along with a delegation from its Defense Ministry and arms industry. And speakers, especially Mississippi Gov. Phil Bryant, couldn’t stop talking about Israel.

Bryant credited a national security conference he spoke at in Israel in 2016 as the inspiration for this one. One of the first pictures he showed during his speech was of him grinning with Prime Minister Benjamin Netanyahu.

“If there’s anyone that knows about homeland security, it’s the Israelis,” he said at the start of his address opening the conference, whose organizers paid for JTA’s flight to Biloxi along with hotel costs. “They have a tough neighborhood they live in.”

The admiration went beyond the governor.

Paul Zukunft, the Coast Guard commandant, said of Israel that “[t]here’s no better example of a country that finds itself in the bullseye.” A panelist said “Israel is literally our anchor in the Middle East.” Israelis spoke on two panels, and at a news conference the governor invited a few Israeli officials to stand alongside him and some U.S. military officers.

The Israeli delegation featured companies specializing in security technology. They were there to expand into the U.S. market and introduce themselves to local officials and private companies.

One tool, Smart Shooter, promises to make guns more accurate. Another, Magal Security Systems, is a border security sensor system that’s used on Israel’s northern and southern frontiers. A third, Beeper, is a surveillance system — already deployed by the Israeli military and police departments in Baltimore and Houston — that can pinpoint where a gun is fired and instantly take video of who fired the weapon.

While there are no hostile borders in Mississippi, Magal has already done work there and elsewhere in the United States securing the perimeters of prisons, power plants and Secret Service sites. It has played a role in securing 80 percent of Israel’s borders, as well as some borders in Europe, the manufacturer claims.

“I don’t think they suffer from any illegal movement on the border, “said Saar Koursh, CEO of Magal. “But for us, securing Mississippi’s critical sites is definitely an opportunity, and besides that, collaborating with the industries doing projects out of Mississippi as well.” Israel Aerospace Industries has two facilities in Mississippi.

The threats discussed in Mississippi were a far cry from those in Israel, where militant groups aim missiles across a border, terrorists try to infiltrate from the barely self-governing territory next door and at least one regional rival threatens annihilation.

Instead, discussion focused on the Gulf Coast’s maritime economy. Panelists talked about boats ferrying drugs, migrants and weapons across the water. They discussed natural disasters like Hurricane Katrina — its effects are still visible here — and how climate change could exacerbate future storms. They talked about the area’s military presence and how manufacturing equipment like drones can boost the state.

But the governor said there’s still plenty of opportunity for Israelis to do business in the state. Bryant pointed to the border tech they have developed, from sensors to surveillance, as a way to secure the coast without a physical barrier. He has made supporting Israel a priority of his administration, visiting three times since he took office in 2012.

“What we can learn from the real world experience, unfortunately of having someone on your border in a threatening manner, can be very beneficial here in the United States of America,” the governor said at a news conference. “Israel has shown the world that you can secure a border with the use of technology as well as the new advanced structures that we see being used here.”

Israel and Mississippi also share cultural similarities, said Lior Haiat, Israel’s consul general for the region, who is based in Florida. Its population of fewer than 3 million makes it intimate like Israel. And the high percentage of soldiers and veterans makes military service a familiar and appreciated part of life, as it is in Israel, where there’s a mandatory draft.

“It’s very similar because Mississippi is a very small place where work is very centralized,” Haiat said. “The governor knows all of the key players personally, and he personally opens the door for Israeli companies.”

In his closing speech at the conference, Bryant said: “Should there come a day when there will be a threat, and it will, we will have friends around the world. We are preparing ourselves in the event that that terror attack does occur.”